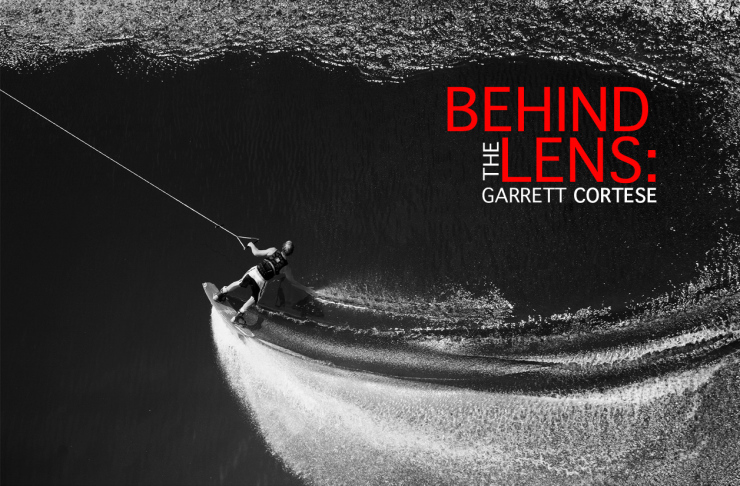 Behind the Lens: Garrett Cortese

Behind The Lens:
Garrett Cortese

Alliance: What has been the most unique trip you’ve taken to shoot wakeboarding?
Garrett Cortese: There are two that really stand out for me, both were for filming parts of the Parks Documentary. The first was to Tahiti where Parks and Danny were getting towed into Teahupoo. Tahiti is basically paradise and Teahupoo, in my opinion, is one of the most amazing natural wonders on the planet. That wave is nuts, and I didn’t even get to experience it on a big day. The energy on that trip was all time and watching Danny and Parks get towed in is something I’ll never forget.

The second trip was to Newfoundland with Parks, Adam Errington and Josh Sanders where the goal was to ride next to and jib icebergs. That part of the world is also gorgeous and the icebergs are unbelievable. We ended up being able to hit two of them, one of which was smaller and had more good angles for the riders to hit,

the other was the size of a small office building and scared the crap out of everybody when a giant chunk sheared off the side just minutes after Josh jibbed it. I ended up getting a cover shot of Parks from the first iceberg that is still one of my favorite photos.

A: Do you ever feel sick shooting from helicopters?
GC: I’ve only shot from a heli a few times actually and never felt sick from the motion or anything. I feel way more sick if I’m in a helicopter and feel like I missed a shot, ‘cause your time is definitely short in those things and it’s hard to tell the rider to try a trick again!

A: Which action sports photographers inspire you the most?
GC: Too many to name them all, but Josh Letchworth and Joey Meddock are two names that I saw a lot in the magazines back when I was in high school and college. Their work has always been inspiring and made me want to try to make a career out of something similar. I’m lucky to be able to call them friends now. I love looking at all kinds of photos for inspiration though, from other board sports photographers like Cole Barash (snow) and Chris Straley (surf), to adventure photographers like Christian Pondella and Corey Rich, to photojournalists like Tomas van Houtryve and Chip Litherland. I love looking at good photography, no matter what the subject.

A: What’s your favorite angle to shoot and why?
GC: Shooting from the tube is probably my favorite and my least favorite (laughs). The angle is great because it really

gets you right in the action with all the spray from the water and everything, but it’s my least favorite because it can get really tiring kneeling on a tube for three or four riders – my legs have definitely been numb afterward… and if the water is cold it’s the worst!

A: Have you ever had any “Oh shit!” moments when shooting wakeboarding?
GC: (laughs) Well I got food poisoning when I was shooting in Abu Dhabi and that provided for one really bad “oh shit” moment. I lost like 10 or 12 pounds that trip! Fortunately I’ve never been hurt while shooting — knock on wood — but I’ve had some close calls. One time I was shooting Trevor Hansen and Benny G was driving the chase boat. I climbed up on the tower to get a higher angle. When Trevor got to the end of his line we had to turn the boats around, so Benny asked me if I was ready to hit the rollers. I told him I was, but I guess we hit the rollers at the perfectly wrong angle and speed and I got pitched off the tower and started falling face first toward the windshield below me. For some reason I instantly swung my arms behind me to try to grab the tower and and caught it. I remember instantly thinking how lucky I was and wondering where that little bit of monkey reflex came from. My camera was hanging from my neck and smacked the windshield and Ben was simultaneously trying to drive the boat and grab me as I hung face first from my arms. That was a close call. Eating windshield just doesn’t seem fun to me.

A: In all your travels, where is the one place you would refuse to return to?

GC: I’m not sure. Even when trips have had less than ideal conditions or riding, they’re always fun ‘cause you’re out there with your friends. I probably won’t go back to the bar in Australia where Danny got jumped while his arm was still in a sling after shoulder surgery, a giant melee broke out, and the local dickheads who started it all pulled knives on the group of wakeboarders there. That was lame (laughs).

A: What’s the one piece of photo equipment you couldn’t live without?
GC: A credit card! (laughs). I’m not sure… I love my 50mm f1.2 lens. If I could only have one lens that might be it.

A: How many photos would you estimate that you take in a year?
GC: I actually had to do a shutter actuation count on the two cameras I have not too long ago. With a little bit of math I’m guessing I shoot 60-70,000 pics a year. Kind of crazy…

A: As the photo editor for Alliance, what has been the most impressive photo submission in the past year?
GC: So many! For how small wakeboarding and wakeskating are in the grand scheme of things, I think it’s pretty amazing we have so many highly talented photographers. There are a few things that come to mind, two of which were featured in our large format 100th issue. One was Bear’s (Bryan Soderlind) work from China to shoot the tidal wave on the Qiantang River. That was one of those “trip of a lifetime” type assignments and Bear nailed it, his shots were unreal. The other from that issue was Spencer Smith’s work from a trip to

Mexico with some of the WSR crew. He took one shot of Randall riding during sunset that looked like he was literally entering the gates of heaven. I think it is one of the best pure wakeboarding photographs I’ve ever seen. This year’s Photo Annual is also going to have some jaw-dropping shots, I’m excited to start putting it together.