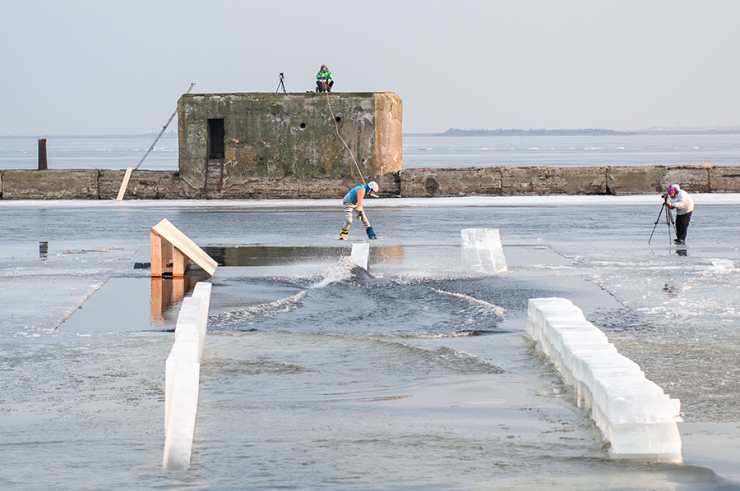 By billmccaffray  •  7 years ago  •  Wakeboard, Global

This is not the first time we are getting together to build something. Last february we built a funbox out of  tons of ice blocks. It allowed us to shred right in the city center of St. Petrsburg.

This year we decided to go further and built a winch park right in the middle of nowhere. Fort Obruchev, an abandoned fortress island in the Gulf of Finland seemed like the perfect spot. Situated 4 kilometers away from the mainland, it remains desolated for nearly 60 years. Russian territory in the Gulf of Finland. A military satelite of the famous Kronshtadt fortifications, which protected acess to St. Petersburg by sea. As we had to get to the island fully prepared to spend at least 3 nights on our own, we really had a lot of stuff with us. Generators, fuel, chain saws, water pump, nearly 200 kilos of construction materials, tents to accommmodate up to 12 people, firewood, food, water, stoves and lots of other things you need to be able to survive out there 4 days in a row. Although we had a canadian cross-country vehicle at our disposal it took us nearly half of  he first day to get everything and everyone delivered to the island.

We spent 3 days working non stop in order to get the set up ready.  Needless to say that cutting ice pools is  hardwork, but you also need to remove all the new ice out each morning to keep the pools safe to ride. It is lots of work.

The initial idea was to have 3 ice pools with 6 different obstacles: a 12 stair drop from the wall of the fortress, one fun box, a wallride, 2 sliders and a kicker. Vladimir Kuchin was the first to try the 4.5 meter drop. Others decided to skip it after the brave guy injured his leg.

Cuttng ice is easy when you know what you are doing. It is a team work. You need to cut blocks and either pull them out and drag away or try pushing them underneath the remaining ice which can be very tricky. You need at least three people to push big blocks and someone needs to look after you as it is so easy to fall into the water.

You wouldn’t not believe we had no alcohol with us. On a trip like this you need some strong spirits to warm you up and help you fall asleep… and sometimes help your hangover in the morning. The ice park turned out to be very heavy and was slowly going deeper under the water. We could hear the ice cracking as we were working. This was so scary! We could actually see and hear the ice crushing around the island which made some of us want to get home as quickly as  possible.

When we were about to start riding, we spotted a lifeguard vehicle which was approaching us.  We did not look as regular fishermen, so the guards stopped by to say hello and make sure we were fine.

Due to several reasons we had very little time to ride and shoot, but still got some materials taken. Pack your stuff, we are going home.  Rest and regroup, get ready for the wakeboarding season.