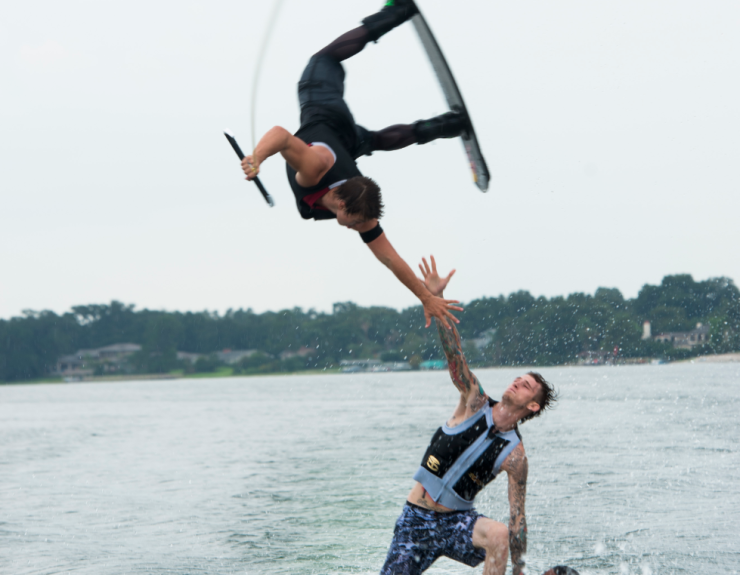 While it may not seem like they have a lot in common on the surface, after meeting a few years ago Steel Lafferty and Machine Gun Kelly have become pretty good friends.  As a result, MGK and his crew always made sure they leave time in their schedule to get out on the boat every time they come through Orlando.  The Cleveland rapper and his band have a pretty rigorous tour schedule, so anytime there is an opportunity to get off of the bus and have some fun they are all in.  Over the summer, they ended up in Orlando again and headed out to Steel’s lake where him and his roommate Shota Tezuka took the guys out for a bit of wakeboarding, tubing, and wakesurfing before the show.  After that fun was over, MGK invited Shota and Steel along with Kevin Henshaw, Parks and Shane Bonifay, Danny Harf, Shawn Watson, and motocross rider Dean Wilson out to his show.  The night ended with the entire crew heading back out on the lake for some late night floating.

After what some may consider a disappointing debut album release, Machine Gun Kelly has come back strong with his sophomore release of General Admission.  Before even getting into the music, you will notice aside from Kid Rock, there are really no known features on the new album, which is quite the opposite from the first Lace Up album.  Instead, there are appearances from some incredibly talented up and coming artists like Leroy Sanchez and Lzzy Hale.  It was actually pretty refreshing to see an album not relying on gaining support from other artists’ fan bases.  MGK seems like he has found his lane and is embracing his ability to tell stories and evoke emotions with records like “Story of the Stairs” and “Merry Go Round”.  His fast pace rapping that originally got him noticed with the Lace Up mixtape can also be seen, most notably on “Alpha Omega.”  Finally, the story of how he got his first major label deal on the end of “All Night Long” will probably give you chills.  From records that you can turn all the way up on the boat, to tracks that you can just lay down and listen to all night, the album has something for everyone and should be a definite purchase.  Machine Gun Kelly finally has the platform under him to show us all what he can really do.

General Admission is now available in stores and on iTunes.