10 Reasons the WST: Battle Falls Was the Best Contest, Ever 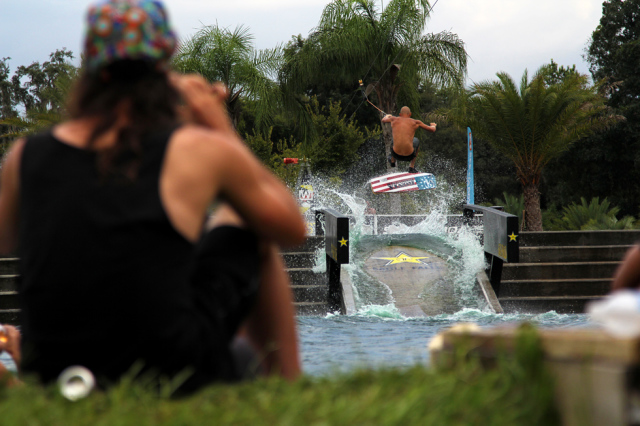 10 Reasons the WST: Battle Falls Was the Best Contest, Ever
Article and Photos by Brooke Geery

What’s up bitches!? Did you miss me? It’s been four years since I left Wake World for snowier pastures and since then, the Internet has become a series of lists and bullet points, so I figure if I’m going to do some modern day event coverage, I’ll keep it quick. The final stop of the Wakeskate Tour, Battle Falls took over Reed Hansen’s complex in Groveland on Labor Day weekend 2014, and here’s everything you need to know.

1. The riding was next level.

Before the finals started, Silas called me out specifically stating I was about to witness the best wakeskating I’d ever seen. And yes, four years later thanks to set ups like Battle Falls, the ease of the Sesitic System 2.0 and a lot of tenacity from the riders, these guys are really, really good now. Four years ago it would take at least a few tries to land a backside or frontside flip. Now they’re warm up tricks. In fact, no one really fell at all until the competition heated up and next level combos were the only way to the top of the leader board.

A new addition to Battle Falls, the diligent judges (Kyle Walton, Tad Mathews and Jon Shell) had a white board with sliding tiles they would move around when a new rider would one-up the leader. Despite the seemingly large amount of effort this required, it made things more exciting since the riders knew exactly what the judges were looking for at all times, and could figure out what it would take to get there.

It’s no secret that there are cans of cheap beer floating around at wakeskate events, but for the adults, Silas and the boys really stepped things up with a little alcoholic side bet. Kevin Henshaw and Matt Hooker were enlisted to each make their signature drink. Hooker’s effort was a classic Bloody Mary, spiced with tobacco and Worcestershire and garnished with olives, pickles, onions and celery. A salad in a glass, it was light, refreshing, and perhaps a little too strong for 11 in the morning. Henshaw’s drink was more of a Ceasar than a Bloody Mary (it’s a Canadian thing) and was topped with two kinds of bacon and a white castle slider. Now anytime someone adds bacon to a culinary competition of any sort, it’s basically cheating, but at the end of the day it was determined that everyone had won this round.

Wakeskating has gone through several DJ’s since my last event, but DJ Boca Raton, aka DJ Discount aka Brandon Rau played all the hits. Taking his requests directly from the riders (my suggestion of Katy Perry was quickly shut down) Rau kept the energy up with classic indie jams all day.

As you may or may not know, Seth Cathy, heir to the Chik fil a throne, loves wakeskating. And accordingly, he’s stoked to hook up fried chicken sandwiches for everyone. And if there’s one thing better that fried chicken, it’s free fried chicken!

It is a little bit hot in Florida in August, this goes without saying, but this past weekend was especially unbearable (and I’m not just saying that cause I live in Oregon – all the Floridians agreed.) However, the bus, which took a solid hour to get in just the right position, enabled you to catch the action in air conditioned comfort. It also provided a fine shelter when the storm on the qualifying day didn’t just blow right through like they usually do.

My memories of event set ups are rickety pools, literally being built right up until the first rider drops. Not any more! Battle Falls is a model of perfection, smooth concrete, stable rails and seemingly endless option for lines. It literally is the future of wakeskating, and I’m stoked to see how proper it really is.

Silas knows spectators need entertainment, even in a world where there is no waiting for the boat to turn around and dudes land things every time, so he brought it an impressive fold out mini ramp that could probably have passed for an art piece in a different context. Despite the heat, people were shredding it all day, and when they got too hot, there was a pool right next to it to cool off in.

“Women’s wakeskating” was basically three or four girls when I left, but now Jen Gilanfarr has carved out her own niche and encouraged girls from all over the world to come be a part. Girls were there from Canada, the Philippines, and all over the US, making the ratio of dudes and babes not even that lopsided. They also ride hard, land things regularly, and have a blast doing it.

Did I mention that the top ten riders on the Wakeskate Tour got an all-expenses paid trip to Republik Wakepark in the Phillipines? Not bad. Not bad at all.

Everyone in wakeskating deserves a lot of credit for the slick and polished form of wakeskating today. The riders (especially those who’ve built winch set ups and pools in their yards), the sponsors who help wakeskating flourish, and the pioneers who’ve hung around to help push things in the right way. But if there’s one person I was most proud of after witnessing the madness of Battle Falls, it’s Silas. You can feel his influence in every piece of the event. It’s as if he said, “how could I make my ultimate dream world,” and then went and did it. Because what could possibly be better than riding a sick set up with your friends (or watching the best in the world do it,) drinking free booze and eating free food, and being able to pay your friends to do it? Nothing, that’s what.

10 Reasons the WST: Battle Falls Was the Best Contest, Ever