Not since 2006 has one rider taken the title in all three main Toe Jam events. Yeah, it was only two years ago, but that’s a long time in “wakeskate time.” Anyway, Reed Hansen walked away from OWC with a new Seadoo Wake Edition and three big toes (as well as one small one for his performance in the winch jam) today. But since we’ve already covered what went on for the last two days, let’s just talk about the cable.

From 16 to 8 to 4 to 2, the day went by quickly, even with 45-minute breaks between rounds to let people ride the cable. But the sweet, silent efficiency of the cable definitely made things smooth and easy.  Trickwise, things started off slow. Aaron Reed rode unopposed because Clint Tompkins was out with a tweaked ankle. The Bret Little and Steven Campbell heat was a tight one, impressive since Steve was nursing a hurt elbow from the night before, but Bret took it on the merit of his flats tricks. Really I don’t even remember who rode against each other in the rest of the heats. Maybe I should start taking notes at these things like Dishman told me to in my dream last night.

But since I don’t take notes, and I gather kids don’t like to “read” anyway, I will just hit some highlights from here on out. The 3 flip remained illusive throughout the day, but there were plenty of kickflips, frontside flips, v flips and big spins. The kicker and the flat box were the most popular obstacles. Nick Taylor did a switch judo 180 off the kicker, and there were several front and back threes. Reed Hansen even went for a 5 in his first heat, when he had some wiggle room.

When it came down to it, Nick and Reed faced off once again. It’s really hilarious to ask them if they’ve ever ridden against each other before every time they face off, but I digress. The finals were tight, but Nick went down on a few flats tricks, and Reed Hansen, well, he’s a machine. The cable was perhaps the most obvious event of the whole weekend, but when all was said and done Reed had taken all three disciplines (and 3rd in the rail) whether the rest of us knew it or not.

2008 was an all around epic year for the Toe Jam, and Scott and co have even bigger things planned for next year. But for now, I am going to sleep for oh, about the next two days. 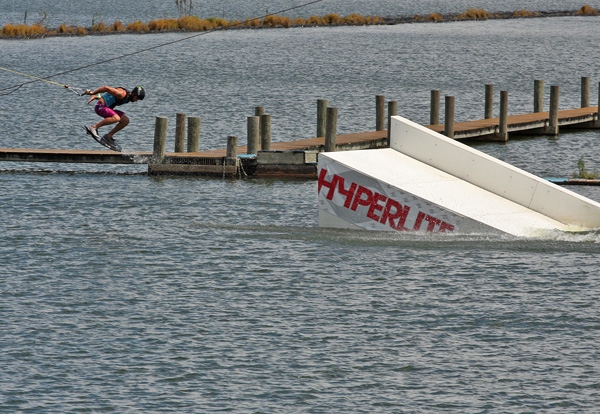