The final stop of the Toe Jam was nothing short of Epic. With veteran riders such as Aaron Reed coming out of the woodwork for this event, it seemed to be anyone’s game. The first round of 16 saw some of wakeskating’s best fall to the wayside. With Grubb and BT both being upset in the early heats, it looked as if it would be all up to Clint to hold it down for the OG’s. The 2nd round gave way to probably one of the best match ups of the day, Clint vs. John Ruark. Both known for being unstoppable cable shredders, there was no guessing who would come out on top. Although Ruark landed a couple of his patented flip tricks up the transition, Clint would best him with some impressive all around riding.

The third and semifinal round seemed to have the whole old school vs. new school vibe written all over it. With Aaron Reed quietly climbing his way up the ranks, he would see his stiffest competition of the day going up against his own Texas brethren, Bret Little. In the other match up you had Clint vs. Stu Shinn, quite a tough one for any judge. In the end, the new school riders prevailed and we had ourselves a Stu vs. Bret final. Both amazing riders, you knew it was going to be a tough one for the judges to call. Stu stomped a backside flip at the last second of his run making his victory seem inevitable. But Bret, determined to get the Toe Jam victory, went out and murdered the course as he had been doing all day, earning himself the coveted Toe Jam crown.

All in all, it was a great day to be a part of wakeskating. The sun was shining on a great Fourth of July afternoon, and I couldn’t of asked to be anywhere better. Now that the Toe Jam is over though I am left feeling a little sad. The season just seemed to come and go so fast. But the whirlwind that was the 2009 Toe Jam series saw the best  riding yet, and there’s no doubt next year it will be even better! 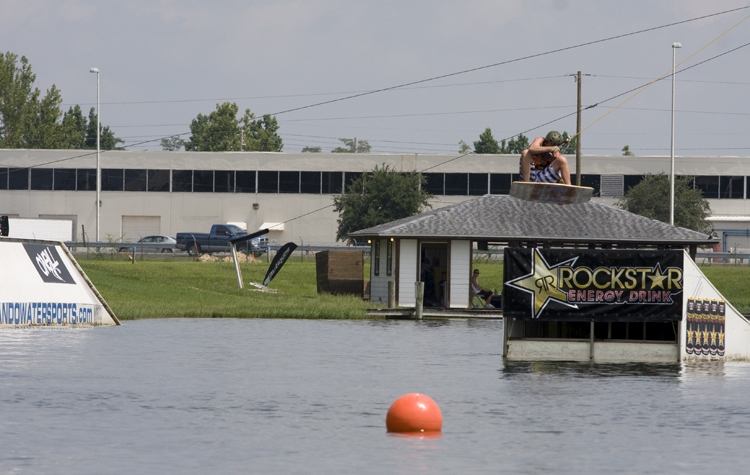