It’s been a while since we’ve done a Year in Review here at Alliance Wakeskate, but despite all of the political headaches & celebrity deaths (RIP Harambe) we endured, 2016 was a pretty awesome year to be a wakeskater. It’s easy to get locked into narrow perspectives, unable to appreciate progress for its incremental nature, but when we look at the big picture of what wakeskating has accomplished from the viewpoint of, let’s say a rider from 10 years ago, it becomes clear that we’re living in the future. Back then we could only dream of the tricks and spots that are now a regular part of the modern routine, not to mention the incredible options we now have for documenting our progress. HD phones that shoot 240 frames per second, 4K gopros, & affordable drones?! At every level of the sport, from noobs to top-shelf rippers, all these advances have made wakeskating the best it’s ever been. Hopefully you got some new toys for Christmas, but before you go off to make 2017 even more awesome, take a minute to reflect on some of the better moments & milestones of 2016 with us and celebrate another year of how amazing it is to be part of something as rad as wakeskating.

Here in the States, we thawed out from winter by watching the killer edits & instagram posts that our favorite riders smuggled back from their exotic warm-water adventures in the southern hemisphere, as well as the first real wakeskate event of the year down in Australia –

Ben Horan really brought us into the year with his bangin’ back noseblunt on the April cover of Alliance Wake on what became the year’s most popular new publicly-available wakeskate drop, at Valdosta Wake Compound –

Stoked on my @alliancewake cover shot by @brutledge at @valdostawakecompound. Thanks to my sponsors for all the support over the years! Reed Hansen went viral on Facebook, casually playing around with an apex predator that survived the K-T extinction –

Brian Grubb reminded everyone that he stopped aging in 2003, is most likely immortal, & will never stop going bigger than the rest of us behind the boat (while also stylishly dominating boat contests worldwide) –

The WakeBabes took their epic little tinny “The Shark” on a spirit journey into the mountains to commune with John Muir’s ghost & document their vision of wakeskating in the timeless high Sierras. They all came back down with a twinkle of starlight in their eyes, and Cassie Scott came down with the cover of our September issue –

The Wakeskate Tour came back with its guns blazing for 2016, re-establishing itself as the premier showcase of competitive wakeskating and playing host to some of the most progressive & most polished riding ever seen in our sport. Having a ranked tour to follow has been one of the coolest parts of being a wakeskate fan these past few years, and as always, Rockstar has been killing it with their video recaps –

Stop #1 at Valdosta set the tone for the season, filled with major upsets & buzzer-beaters in every round, culminating with a record store podium of Travis Belsito, Daniel Grant, & Andrew Pastura –

Stop #2 at Suwannee was one of the greatest of all time, feeling more like a festival in an epic forest than a competitive arena until you sat in the treehouse to watch the intensity of any stacked heat that hit the water –

When the dust settled on the 2016 season The King still reigned supreme, but this time with a little asterisk next to his name on the record. For the first time since The Wakeskate Tour’s conception, Andrew Pastura would have to share his Championship Title. Nick Taylor consistently performed well enough in the Finals of each event to tie for the Title without winning 1st Place at any of the stops. We here at Alliance would have been ecstatic to see a tie-breaker of some kind between the two titans, but there’s probably a WST rulebook that governs these sort of things. Congrats to both gentlemen on their shared victory.

On the primetime TV front, wakeskating’s most ambitious & successful project was “Time & Tide: The Danny Hampson Story”, which ran on ABC & NBC Sports. A raw & intimate look at the simultaneous rise of a young Danny with the rise of the young sport of wakeskating itself. A story about passion, living from the heart, the importance of family amidst life’s trials & tribulations, and an overall stoke-worthy memoir of wakeskating’s mystical early days in the ever-creative hands of Thomas Horrell, this movie reminds us all how amazing Danny Hampson has always been, and how special it is to be a wakeskater. Whether you’re a newbie, a salty old veteran, or an up-&-comer, we’re all part of this wonderful little collective, and we all owe Danny Hampson a smile & a high five.

Wake The Line put our best riders to the test, having them navigate a very tight-quarters wakeboard course for one of Europe’s biggest prize purses. There weren’t many groundbreaking maneuvers going down in those Olympic swimming pools, but watching Daniel Grant fully dominate in both disciplines was quite a sight to see –

[Turns out there is no WTL wakeskate video available; Gotta say, it really makes us appreciate The Wakeskate Tour]

Apparently nobody told Coco Mendez about all the internet arguments from 2006 debating what was & wasn’t possible on a wakeskate, because he keeps posting insta videos of himself cleanly stomping moves that used to be sarcastic never-going-to-happen comments on a green & blue message board. Keep it up, Coco!

Another rising name in the sport, the powerhouse known as Jake Ramsdell also came barging into 2016 dropping brand-new hammers all over the place, including wakeskating’s very first switch 360 flip –

Braden Ioi held it down for Canada’s winching scene, pushing hardcore wakeskating on rough concrete across the Great White North –

Over the past year we’ve been taking small doses of Andrew Roehm’s expansive media project “Istudiomo” every chance we get, as he’s very meticulously been releasing articles, interviews, short edits, & finally a mind-blowing trailer for what will be the full-length wakeskate movie by the same name, coming sometime in 2017. With such thoughtful production & one of the heaviest line-ups in wakeskating history, this ambitious undertaking by Mr. Roehm has everyone in the sport looking forward to what comes next –

In addition to their glossy new line of skates & softgoods, Remote’s booth at Surf Expo this year saw plenty of action, mayhem, & eventually destruction, being the surrogate home for any & all passing wakeskaters through the hectic tradeshow weekend. Luckily for us, they also headed out to Kevin Henshaw’s laboratory at Area 52 & filmed a killer session testing out their new decks –

It’s crazy to think that these first few attempts are from 6 years ago while filming Defy. I have tried this trick so many times that in my friend group it is referred to as my “Great White Buffalo”. Persistence was key with this one and I am thankful for all of the drivers, videographers and helping hands that helped make it happen after all these years. I was pretty convinced there for a few years that I couldn’t do it. Well I’m glad I got over that! Backside Bigger Flip, or as I like to call it, The Mega Flip #hitcase @rockstarenergy @ronixwakeboards @supraboats @foxwake @mossyoak @sesitec @perfski #wakeskate 🎥 @seankilgus @dieterhumpsch @wolfwithin @chrismason91 @aaronrathy

Trey Seneff built his dream wakeskate park out near Smith Mountain Lake in Virginia, where a few dreamy sessions have already gone down. Blackwater Junction opens to the public in April of 2017 –

We ended our year the same way we’re ending this Year in Review, by having our minds completely blown by Daniel Grant’s latest video release, “Eclipse”. Nobody in the world has spent a higher percentage of their lifetime underneath a cable & nobody else in the world can do what Daniel does. Make sure you’re sitting down for this one – 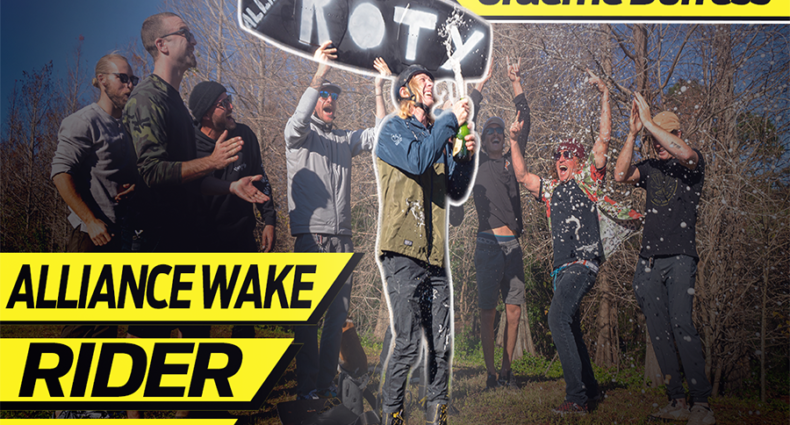