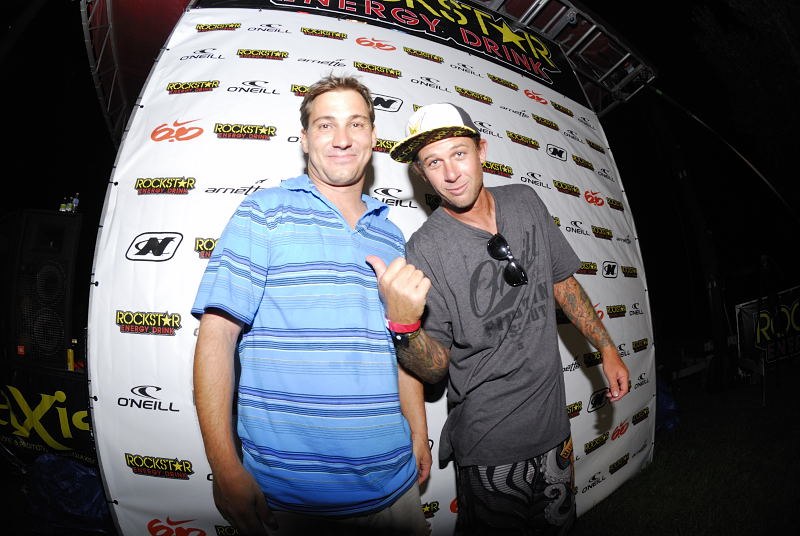 Orlando, Fla. — Pro wakeskating climbed to another level on Saturday, September 11, as the world’s top pro wakeskaters competed for the sport’s most coveted title at the 7th Annual Byerly Toe Jam.

The prestige of the event was even higher this year, with a huge crowd and Livestream webcast on O’Neill’s Facebook page. Riders were also competing for the highest purse in the history of wakeskating at over $20,000. Contour Cameras stepped up this year, awarding each winner with a hands-free HD video camera and waterproof housing.

The field was narrowed down a week previous to the event, and the Toe Jam always showcases every aspect of wakeskating. Eight riders qualified for the boat portion, eight for cable, twelve for PWC and twenty for the winch pool jam on Saturday night. This year, the Toe Jam provided a more festival-type atmosphere with an all-day schedule, free Rockstar energy drink, Chipolte catering and a banging live performance by Swamburger and DiViNCi that you can check out at solilla.com.

“It took a lot of work to get everything together,” Scott Byerly said. “But it all came together and everybody ripped. It’s always cool to see how far the sport gets pushed each year.”

The biggest honor in wakeskating is to win the overall title, for the most points accumulated in all divisions. Reed Hansen and Grant Roberts were the only two that had qualified in all three categories. It was a constant battle as they moved all around the different sections of OWC throughout the day. Emad also offered up an electric skateboard for the overall winner in adition to the $5000 at stake.

The day at OWC started out behind the Byerly’s Signature edition Nautique, with a surprising start. Reed Hansen was knocked out during the first round by Stu Shinn. Stu has been able to put it together behind the boat all year, and this time it was good enough to take the previous year’s winner out of the game. As the riders dwindled down it wound up with two roommates in the final. Brandon Thomas and Brian Grubb rode against each other for the boat title in a really close heat, but Grubb came out victorious and was the first winner of the day. Grant Roberts made it through the first round in the boat event, and had a lead over Reed Hansen going into the Cable event.

The cable event had a few upsets as well. French rider Leo Labadens, and Bret Little got knocked out in the early rounds leaving the final between Rockstar team rider Nick Taylor against Reed Hansen. Hansen rode super well, but Nick threw down some super tech moves in the flats including regular and switch kickflips, and a switch frontside flip. Reed would finish in 2nd place, and Grant Roberts tied for 3rd. This left Grant in the overall title lead by just one placement going into the final event on the rails.

The Sea Doo pulled the event on the rails with 12 riders total. The first two rounds were head-to-head, then it went to a 3 man final. After the first round had gone down the two top riders in the overall title race met up in a head to head heat. Grant Roberts and Reed Hansen both went out and rode super well, but Reed edged out Grant by a pretty good margin. This left the overall race completely up to Reed Hansen. He went into the three man final having to get second or better to edge out Roberts for the overall Byerly Toe Jam win. Last off the dock, Reed was able to watch Yan Lecomte and Andrew Pastura and know exactly what he had to do to win. Reed had the eye of the tiger and went out and won the rail portion of the event. taking the overall Byerly Toe Jam title.

For the Nike 6.o winch jam under the lights pulled by the crew at Ridiculous Winches, Yan Lecombe back lipped the hubba ledge on his last pull to seal up the first place spot. Dieter Humpsch came in 2nd place with a front lip, and Andrew Pastura in 3rd with a frontside 180 over the rail.

Scott Byerly would like to thank Rockstar Energy Drink and O’Neill for their undying support of the Toe Jam as well as Nike 6.0, Arnette, Nautiques, Contour, Sea Doo, Emad, Ridiculous Winches and Chipotle. “Without these guys, there would be no Toe Jam as we know it and a lot of them have been behind it since day one.”

For more information check out ByerlyToeJam.com