Spot or Not: The Grist Mill 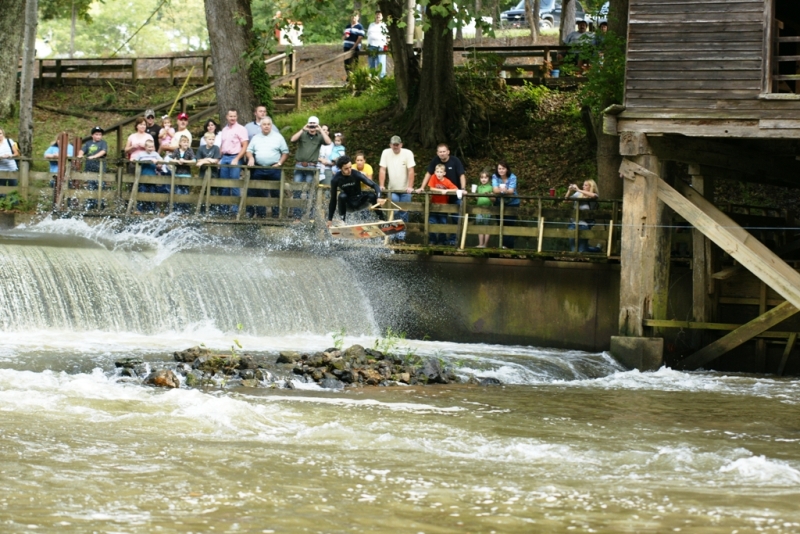 I was driving back from Birmingham one Sunday afternoon with some time to kill, and having recently purchased a new driving toy. I vaguely remembered some twisty back roads that led home… Turned out they didn’t, but I ran across a sign to a little grist mill and covered bridge.  When I arrived the falls were moving from a ton of rain we’d gotten, but the spot looked good. Only thing i couldn’t tell about the landing.  It was late, nobody was around, the little store was closed.. I snapped a shot with my phone and sent it to Ben Horan and Tyler Mangus and then called Kyle Walton.  I also did some web research to find out more about the falls and came to find out there were lots of rocks…it was questionable at best.

When Ben showed up in Alabama to winch though, the mission was on. We had a few other spots to fall back on it if didn’t work, and there was  a skate park on the way. At the Grist Mill, I walked in the general store at the falls to pay our park admission and ask about breaking out a winch in the middle of the “goings on” (family reunions and a haunted trail starting at the covered bridge.)  Ben stood there smiling as I explained why were where there, but with out flinching the guy replied to my question, “It’s on you!” and smiled back…

The landing had two deep areas, the middle one was said to be 4-5 ft but the water was moving hard through it. The side one, by the mill was pretty good and about 3 plus ft.  Walton dropped it first, no problem. Word traveled through the park and the on lookers assembled.. Four generations came to watch Kyle and Ben do their thing on the newly christened Alabama winch spot.