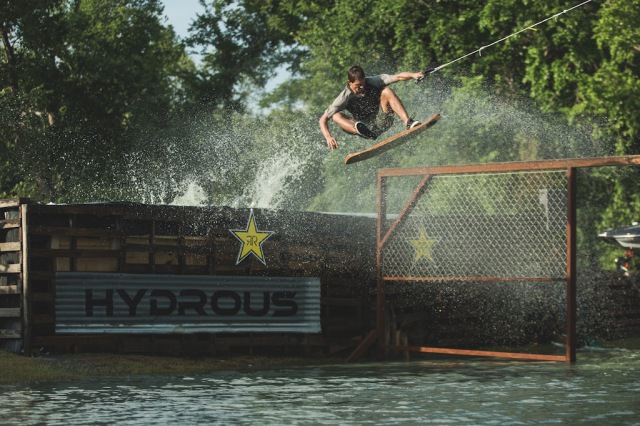 The second stop of the Wakeskate Tour  went off in Texas this past weekend at the new Hydrous Wake Park in Little Elm just outside of Dallas. They say everything is bigger in Texas and the guys at Hydrous and the Wakeskate Tour took this into account building one of the biggest drops the tour has seen. With a metal rail coming out of the top pool and two perfect metal flat rails in the bottom pond the setup was perfect to display some of the best wakeskating in the world. The System 2.0 was high in the sky giving the riders the sweet, silent pull they were looking for and each heat was more impressive than the last. The crowd stayed amped  on Rockstar’s magic energizing blends and the park’s restaurant, The Tap House’s adult beverages and awesome food. Incredible riding was put down by everyone with standout performances (surprise, surprise) by the Pastura brothers. Congratulations to Yan Lecomte who rode like a  beast all weekend to claim his first Wakeskate Tour podium. Sorry I didn’t take more photos, somehow I made finals (even a blind squirrel finds a nut now and again) and was too busy riding to capture the magic. My terrible photos couldn’t have done the riding justice anyway; wakeskating is progressing at a crazy pace and if you haven’t gotten the chance to check out one of the Wakeskate Tour stops yet I highly suggest you do. Thanks again to everyone at the Wakeskate Tour and Hydrous in Little Elm for everything. – Words by Danny Hampson

For more info on The Wakeskate Tour check out thewakeskatetour.com