On Thursday morning I got a panicked called from Clint Tompkins. “Are you on your way here already?” he asked. “Because the Fort Worth health department just shut us down because of swine flu. Cancelled the whole event.”

Now this whole swine flu thing is obviously out of hand. In fact, I haven’t been watching the news lately, so I haven’t even heard about it! But it’s not like people are hacking up phlegm and dying on the streets everywhere. So for what seemed like no good reason, Clint’s Trinity River Showdown was nixed before it even got started. The contest was to be the first all-natural winch event, had an all-star line up and a hefty purse (by wakeskate standards.) But the health department wasn’t going to let the gates even open, so it was time to go to plan B.

My plane ticket was bought and Texas is ripe with winch spots, so I figured it was a good opportunity to head down and spend some time shooting with the mayor of Dallas winching himself. Clint rounded up his usual crew, including schoolteacher Beau Parker and Dallas Cowboy’s graphics dude Charlie Hewitt and starting listing off spots we could hit.

I figured if we were going to just go out in the greater Dallas/Fort Worth area, we couldn’t be too careful. So I purchased some masks for us to wear. I didn’t need anyone catching swine flu on my watch, and while Beau and Charlie were down to play along, Clint didn’t find my humor nearly as funny. At the first spot we hit, the McDonalds gap made quite famous by Clint’s part in Fun Boots! Charlie even ollied the gap in his.

We hit the aforementioned gap for a few solid hours. The spot is perfect. Just enough drop to be big, but not so big it’s too hard to do tricks down. Plenty of start up and landing, deep water, and minimal grime. The best part though — it’s virtually bust free. In fact we might have stayed there all day if it didn’t start to get dark. My first inclination was to set up my flashes (since the natural light had been fairly lackluster anyway) but then I realized it was 3 pm — a little too early to be getting dark. As Charlie took a couple quick hits, the clouds rolled in hard and fast and before we knew it, the sky had opened up, drenching us completely.

We hurried into the car and as we made our way down the street to dryer ground, it filled quickly with water. We’d soon learn that only a few miles away, The Dallas Cowboys practice stadium (a literal bubble) had collapsed from the wind and rain. So yeah, good thing I didn’t set up my flashes. Also a good thing that we weren’t standing on the banks of the Trinity River trying to have a contest!

Day two we awoke to more gray dreariness, but only a slight chance of rain. Since it was Sunday, seemed like a good day to hit up “The Church” where the tricks that were sure to go down would make up for the lack of light. The kicker was dragged onto the sizeable spillway and sure enough, Clint threw down some one-footed spins and a 180 board varial that you really have to see to comprehend. Charlie and Beau are no slouches either. In addition to some front and back one’s a few stylish cannon balls were common.

We left “The Church” and headed off to check out another spot, this one a series of gaps in a very scenic public park. All the spring rain has made Texas unusually green, and there were even a family of baby ducks. It was beautiful really. But what was not beautiful was the cloudy skies and flat light, so we decided to save this spot (which would probably be a one time thing) for another time when “getting the shot” would not be a total wash.

After two days of winching in the gray and rain on very full waterways, it was abundantly clear that this whole swine flu thing was a blessing in disguise. If we are being honest, it would have been a miserable time to have the contest. But just because the allotted competition time was over, didn’t mean we were. We convinced Beau and Charlie to ditch work and come winch with us again.

Monday we headed to DeSoto, TX, to a spot Clint used to fish at as a youth. The gap to clear was a solid 35 feet of jagged rocks, which required the winch to run at nearly full speed. And if that wasn’t enough, when we rolled up, there was a snake easily the size of a small alligator chilling on one of the rocks. Beau, the snake hunter, hit it with a rock and it receded to some dark crevice while the guys bravely set up the winch.

This gap was a serious commitment, and I don’t think Clint and Beau realized how serious first pull. Beau fired up the winch, but not quite hard enough, and Clint nearly clipped the bottom rock first go. A few more MPHs and Clint rode away from an ollie in no time. After some thought, he decided that was about the pinnacle of tricks he felt comfortable throwing down this monster. So it was a bit unnerving when Beau and Charlie decided to give it a try as well.

Beau went first, and despite having less than 2 years of riding experience under his belt, nearly rode away from an ollie himself. After one near miss though, he decided to leave it for another day, and Charlie was up. Charlie is known for the occasional out of control maneuver, but I will say his singular front flip attempt was both stylish and death defying. Of course, landing flat on his back didn’t inspire him to go again, so we called it a day for the winch.

On any good wakeskate trip, it’s nice to get a boat set, so after some scary winching, we headed out behind Beau’s Sea Doo boat on lake Ray Hubbard for a mellow session. Only one leech encounter, and the slight threat of rain, but we all logged some time on the water.

For my final day in Texas, our winching support team unfortunately had to go to their day jobs, so Clint and I were on our own. We decided to head out to Texas Mastercraft to take a set on the System 2.0 cable. The weather was still not cooperating (note to self: Texas in late April/early May is not the best time to go) but Clint nailed out some tricks on the kicker and fun box in no time flat. It was a nice mellow end to a fun, albeit, very gray, trip to Dallas. The best part, I am leaving healthy and swine flu free! Guess picking up those masks helped out after all.

Special thanks to Clint, Beau, Charlie, Carol, Amanda and Jimmy at Texas Mastercraft for their hospitality and showing me a good ol’ Texas time. 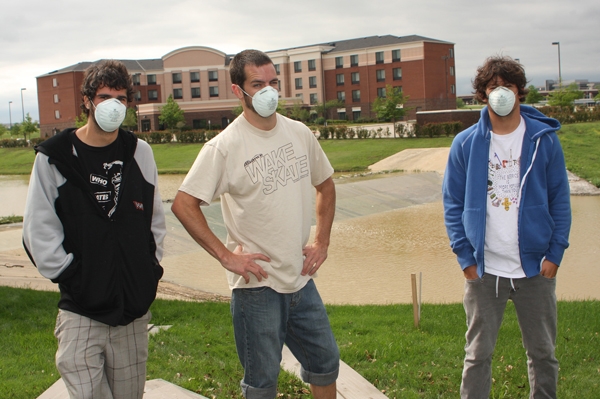