Once you catch a travel bug it becomes hard to stay put in one place with the monotony of daily life dragging you down and the allure of new adventures pulling you toward distant destinations. I for one am easily persuaded by the latter and for this reason, two weeks ago, I said “peace out Orlando” and booked a ticket to France to visit my friend and fellow OAK rider, Kevin Calvez.

After a few days of sightseeing in Paris and a day of riding the cable in Toulouse, we made our way down to Montpellier, where Kevin was judging the wakeboard rail jam at the 2009 FISE Action Sports Festival. After traversing France and spending several days in a few of it’s major cities, it seems to me that France’s greatest resource for the wake community is it’s plethora of ideal winching spots and locales for rail set-ups and system 2.0s. Elaborate fountains surrounded by epic architecture can be found around every corner. What’s more, each town seems to have a river running right through downtown, as is the case here in Montpellier. For the FISE, there are venues stretching the le ngth of the river where the wakeboard, BMX, skateboard and even Inline Skate competitions are taking place.

Just between the wakeboard set up and the remainder of the festival, there happened to be a dam with a 5 to 6 foot gap down to the rest of the river.  Coincidentally wakeskater Josh Kirby was here driving the System 2.0 for the competition. So at the end of the quarter finals, we decided to use our free time to winch the gap.

Winching a gap has never been so effortless. Kirby and I were blown away by the ease with which we were able to get set-up. We encountered none of the usual obstacles one would encounter trying to winch in the crowded downtown area of a major U.S. city in broad daylight. Kirby and I watched in amazement as our french hosts pulled our van around cement pylons and onto the sidewalk right up to the exact location where the winch was to be secured to a street light. As Kevin walked down to the river with his board, two security guards approached him and I could tell by looking at Kirby’s facial expression that he was thinking the same thing I was: “game over.” But unlike most roid-raging, power-tripping security guards that one encounters in the States, these guys just smiled a greeting and cocked their heads in curiosity as if to say, “you guys are nuts.”

The gap was tons of fun and the high bank of the river allowed for a unique set-up where the winch wasn’t pulling us downward. The only sketchy aspect was the fact that the water on landing was only 2-3 feet at its deepest and full of rocks. As soon as Kirby first ollied the gap, spectators began to gather. The crowd grew until it was large enough we had to take some barriers from the festival and set them up to keep people back out of the way of the rope. It was as though our audience assumed we were just another part of the festival’s entertainment, applauding every time a trick was landed. I think the general public could afford to learn something from these French. If only we received such a warm welcome at every spot we winched, the world would be a better place for wakeskaters everywhere. 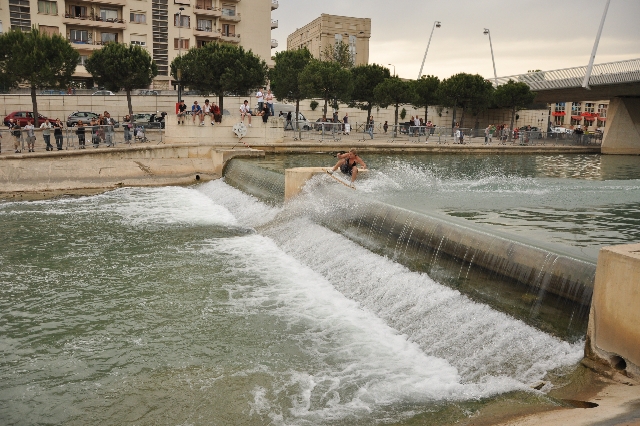