Stu Shinn’s house is mainly known for 3 things: Insane wakeskating behind the boat, abundant food, and the home to one of the truest trues known to man. But the idea of winching at Stu’s never really came about until Keaton Bowlby came to visit from out West. As it turns out, Run-up + Incline Rail + Landing = The length of the shoreline in the backyard. With a perfect place to put the winch on the dock, the wheels started turning. Keaton, Travis and Tom Doran, and Stu called me over and we got to work constructing the rail. We did all the layout work in the driveway where we had a garage full of tools and a fridge full of drinks. I can’t really figure out how it took us that long to do it, but we are wakeskaters and there were plenty of distractions.

After a short discussion on where to position the rail, we used a garden hose to sink in the 4x4s, a perfect way to set in a steady permanent rail. The siding on the top piece was so well placed that we didn’t even have to nail it to the posts, it just sat on top nice and snug, which will be convenient if and when Stu decides to change it up. Once the rail was built we were all ready to shred the eff out of it, but since the bayou is salt/brackish water, wakeskating out there almost always depends on the tides. We had to wait, but we weren’t going to wait until morning. A few good hours into the night, we set up the construction lights and the first winch session at Stu’s went down. Keaton, Stu, and Trav had some sick hits (and some gnarly wrecks), but we knew the best was still to come. The tides that week were pretty consistent. Lower in the morning and then coming up all day. This gave us time to sleep in a little the next day and get a good breakfast before we started shredding and meant that more night sessions would be going down for sure.

That night we toyed with the idea of playing SKATE the next afternoon once we had the rail dialed in. We even drew up brackets and drew numbers out of a festive Mexican hat, and even though the games of SKATE never actually went down, we all won. The next day Hooker and Roland came out from Errrlando and further stoked out the crew. With Walter pulling us for cents an hour, there was nothing to keep us from tearing this rail apart. Each of us drew our own line of personal progression, but the consistent theme of the sesh was locking in. Whether it was Oak Udders, Integrity Lipsticks, or LF Obscura fins, it was all about noseslides and blunts. We would usually ride 2 or 3 at a time for about 45 minutes, switching off each hit. Everyone was learning new tricks every set. If you weren’t riding, you were probably driving the winch or manning a camera. It was a perfect session. The rail was set up in shallow water between two docks and right next to shore making it super easy to get fresh angles and good close-up shots, our own little arena. No one to kick us out and no one to tell us that we couldn’t. What happened over the next couple days can only be explained by the video and pictures that came out of it.

Overall it was a sick few days of shredding and made me realize how simple the fun of wakeskating is, just a few friends with a winch on a short stretch of water can give endless hours of joy. I want to say thanks to Stu, Trav, Keaton, Tom, Roland, and Hooker for the good times… thanks guys! 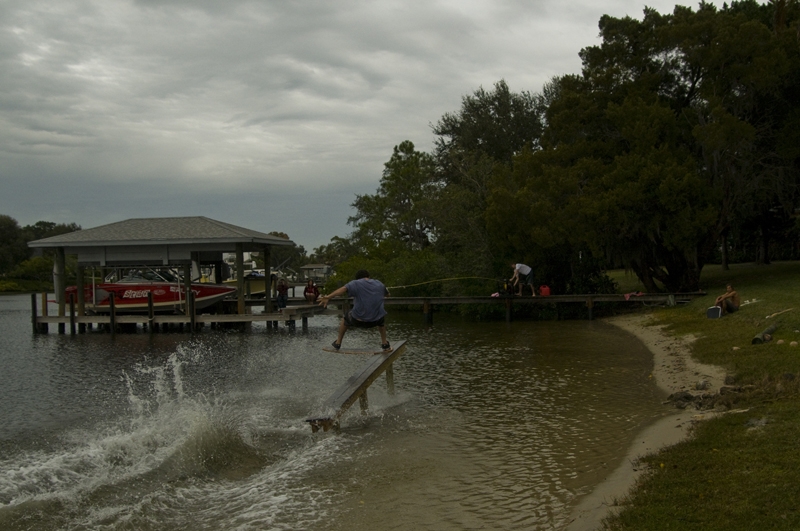