In Search of the Mine Key

By billmccaffray  •  11 years ago  •  Wakeboard, Uncategorized

Up the up rail 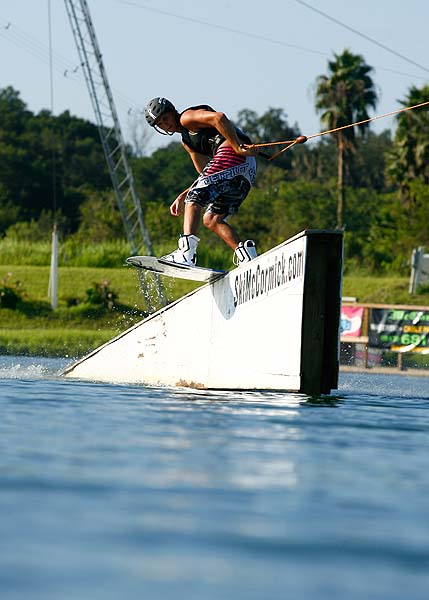 This past weekend I got to spend time with a handful of the CWB team as they continued to shoot photos and video for 2010 marketing purposes. The weekend started early on Friday with a trip to McCormick’s Cable Park outside of Tampa Bay. McCormick’s has become the hot new cable spot, and for a good reason. Fresh rails, a cable that goes clockwise, a barrier island down the middle to keep the water glassy, and an awesome laid back vibe. The bros at McCormick’s were cool enough to open the park early for Derek Grasman, Zane Schwenk, Adnrew Adkison, Jimmy Trask and Will Christien so they could all get their cable shred on in peace… Well, relative peace… Zane started the morning with raley dock start shoe ski run… and proceeded to try to ride everything in site, including rental helmets and a trash can. He ended the day with some barefoot S-bends. There’s a reason they call him “Insane.”

The real gem of the trip was still to come, though. Zane had lined up an awesome private lake at a limestone mine and we were granted full access. Of course, the mine is in the middle of nowhere, so we had to be on the road by 5:30 AM to get there in time to shoot during the good morning light. Somehow we all managed to be on the road (four vehicles, two of which were towing X-Stars) by 5:57 (we had to wake up Grasman and then do a drive-thru mission at McDonald’s), which was a total shock to most of us. Even more shocking, we made it to the mine a little after sunrise and we never got lost. There was just one problem; the gate was locked and nobody had a key. We tried calling some contacts, but no calls pointed to a key. Zane even looked under some rocks for a “hide-a-key” but came up with nothing but poop. We could easily hop the fence and go check out the lake… and they looked perfect… but that didn’t do us much good since nobody could lift an X-Star over the gate… Unable to get a hold of a person who might have a key, our AM enthusiasm quickly turned into “Plan B?” mode. All of the iPhone geeks quickly pulled out their Google Maps and started looking for the nearest place to ride. To keep the story short, this “Plan B” led us on a wild goose chase of the pure wakeboarding comedy kind. We ended up driving around for about 3.6 hours, searching, hoping, asking locals, and often wondering about the location of the elusive mine key. By lunchtime we were all ready to kill each other ’cause we’d been up since the butt-crack of dawn, hadn’t had a real meal yet, and were still to do any wakeboarding at all… but during lunch we finally heard back from the man with the mine key, and he had unlocked the gate for us. So we drove back to the magic mine and proceeded to shred to our hearts’ desire.

There’s nothing like being out on a Saturday in perfect weather at a private lake that you have all to yourselves, especially when that lake is the perfect temperature, distance and depth for riding/haning out — not to mention the fact it’s way cooler looking than any other “normal Florida lake.” Everybody took advantage of the epic conditions, myself included when the sunset turned into something straight out of Apocalypse Now. Feelings of despair, longing, and violence towards fellow riders had quickly turned to joy, exhultation, and the consumption of several Not Beers. That night we crashed in a local hotel/motel/Holiday Inn and took advantage of the private lake’s conditions all over again in the morning. We even found some time to play on a few of the mine’s decomissioned, delapidated cranes. Fun.

Eventually we made our way back to Zane’s place in Winter Haven to catch up on sleep and do a little more shooting, but plans were already in the works to go back and do some more mine riding ASAP. This time we’ll be sure to know the location of the key before we do. In Search of the Mine Key