On March 1st, the 2019 Summit came to a close after the annual Leadership Awards, a ceremony that recognizes industry leaders and top performers for the year. The awards ceremony was well-attended, with over 200 guests in the audience, and was a memorable part of this year’s Summit.

For the 2019 Leadership Awards, voting ballots were sent to all 2018 WSIA members (635), and input was strong. The awards honored the best in the towed water sports industry, and we thank both the winners and nominees for their dedication and service. 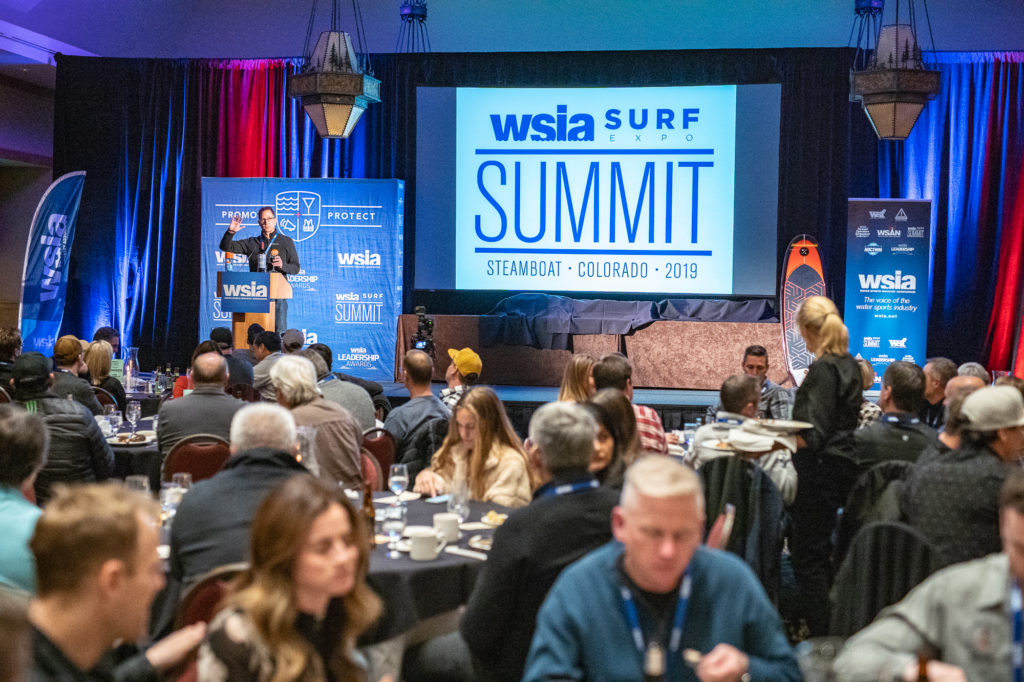 Wake Park of the Year

Wake parks help eliminate barriers to entry and are introducing an exponential amount of new people to the sports of wakeboarding, water skiing and more each year. The honor for Wake Park of the Year was presented to the wake park which had the best community outreach programs, followed safe practices at all times, and did the most to grow water sports in their area.

The WSIA was pleased to announce that Texas Ski Ranch was the recipient for 2019. Morgen Burchell from TSR accepted the award saying, “Keep supporting the people that are within [our industry] because that’s how we’re going to continue going far.” 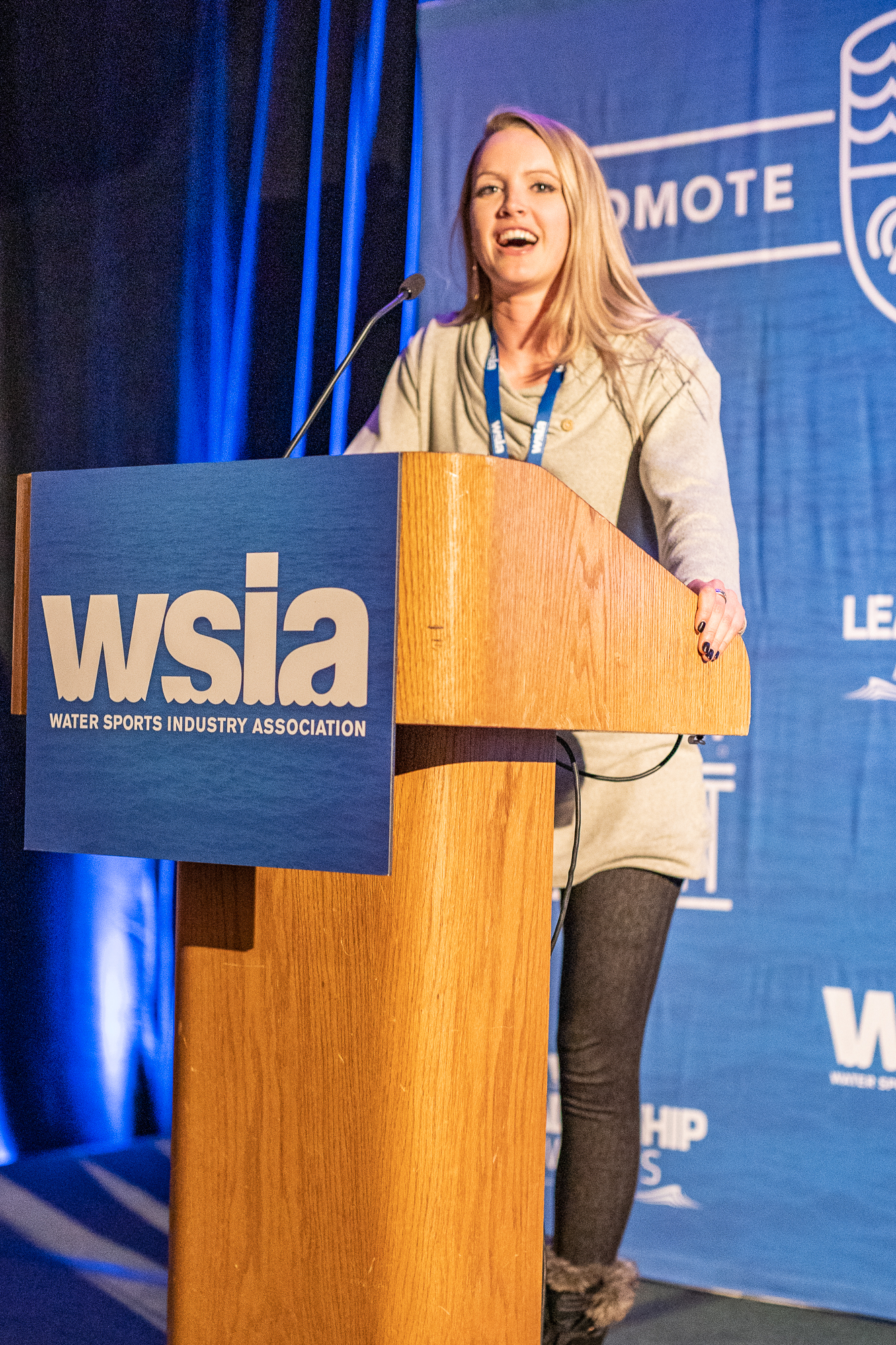 This next award recognized the water sports school or camp that has shown excellence in training their students and offers excellent amenities and support for events, competitions, and clinics. Special consideration was taken for organizations who have reached out to new and beginner riders in their community by working with Wake the World, In His Wakes, local youth groups, YMCA, etc. as well as promoting #PassTheHandle.

This year, Freedom Wake Park took home the top honor for their commitment to their students, offering training to beginners and pros alike. Their world-class private boat lake and two-tower cable system in Orlando, Florida is a highly reputable facility, with state-of-the-art boats from Malibu and equipment from O’Brien. Cobe and Tarah Mikacich own and operate Freedom, and are some of the best water sports coaches worldwide. 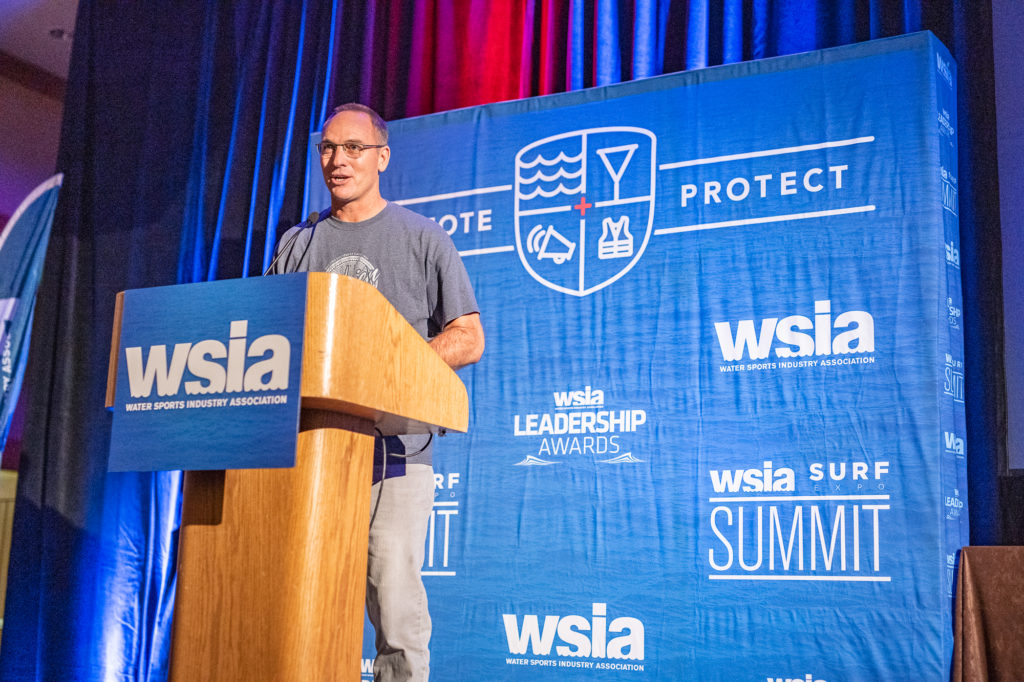 Retail Shop of the Year

This honor was presented to the specialty retailer that has distinguished themselves through outstanding product knowledge, creative displays, consumer enthusiasm and promotional ingenuity. This pro shop offered the best selection, product mix and merchandising throughout the past 365 days and has gone out of their way to support the contest scene, facilitate water sports clinics, work with community leadership groups, and grow the sport.

For 2019, the winner was narrowed down to Wake Effects by Big Thunder, who were humbled to be honored. “Without boat and gear manufacturers, a pro shop would be nothing. It takes everyone in the room to come together to even make retail a thing, so I appreciate it.” 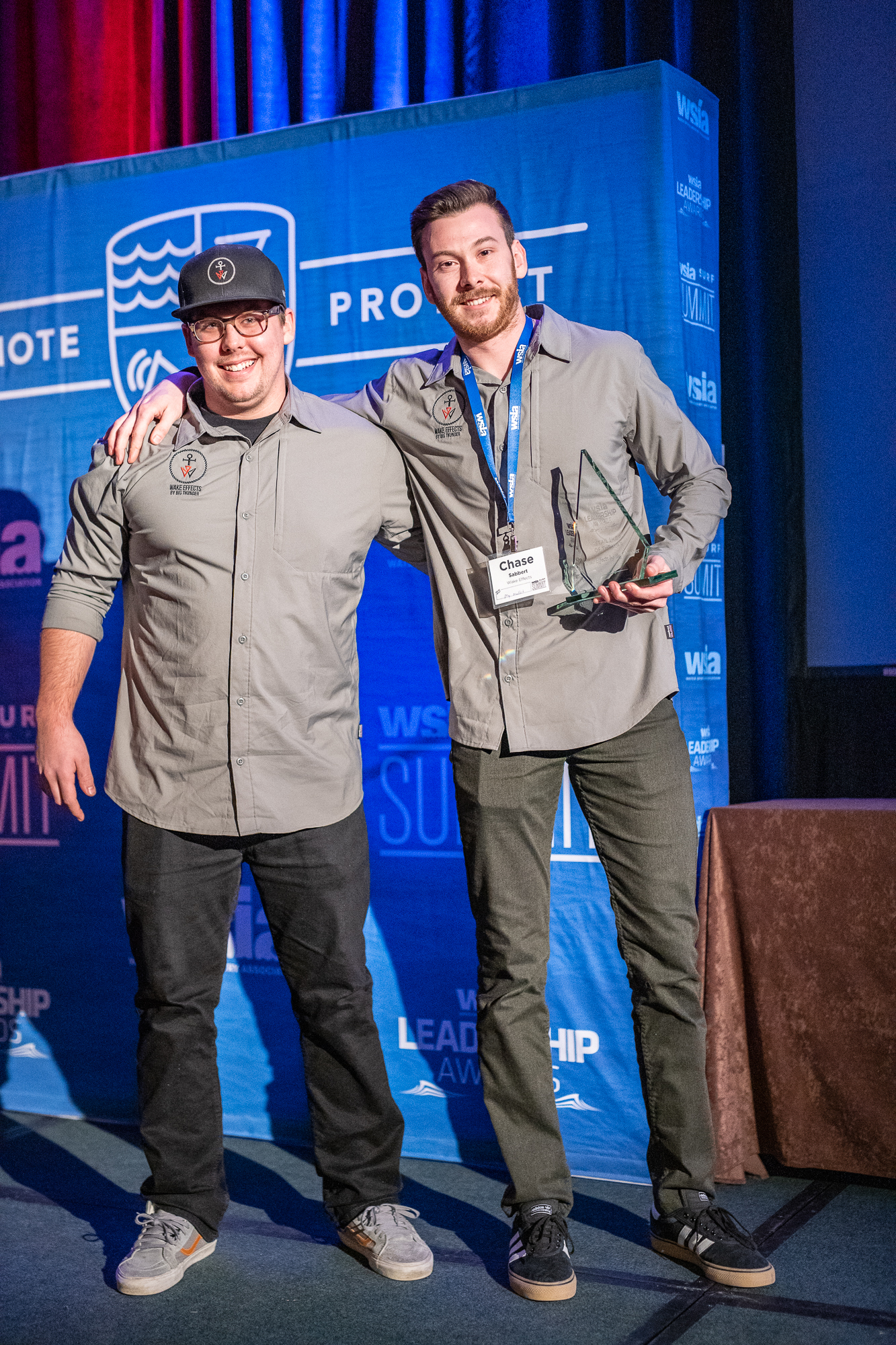 Marine Dealership of the Year

Consideration for this award focused on the dealership that went above and beyond in promoting and protecting towed water sports in their area. This leading dealership has a strong service department, an accommodating showroom for consumers, and merchandising that connects the consumer with what it’s really like to be a part of the towed water sports lifestyle. This dealer also participated in educating customers on Wake Responsibly and hosted #PassTheHandle opportunities.

The very deserving award winner this year was SouthTown Watersports, and the recipient expressed gratitude to the industry. “Over the years, we’ve seen so many fans come through the dealership and enjoy boating, and I can say this industry has given my family, my friends, and my employees a great life.” He continued, “We’ve gotten to work with some great brands as our dealership has continued to grow, and we couldn’t be more thankful.” SouthTown left us with this piece of advice, “I hope you realize the influence you [in the industry] have on people. Pour into the people in your community, and it will only make your business better.” 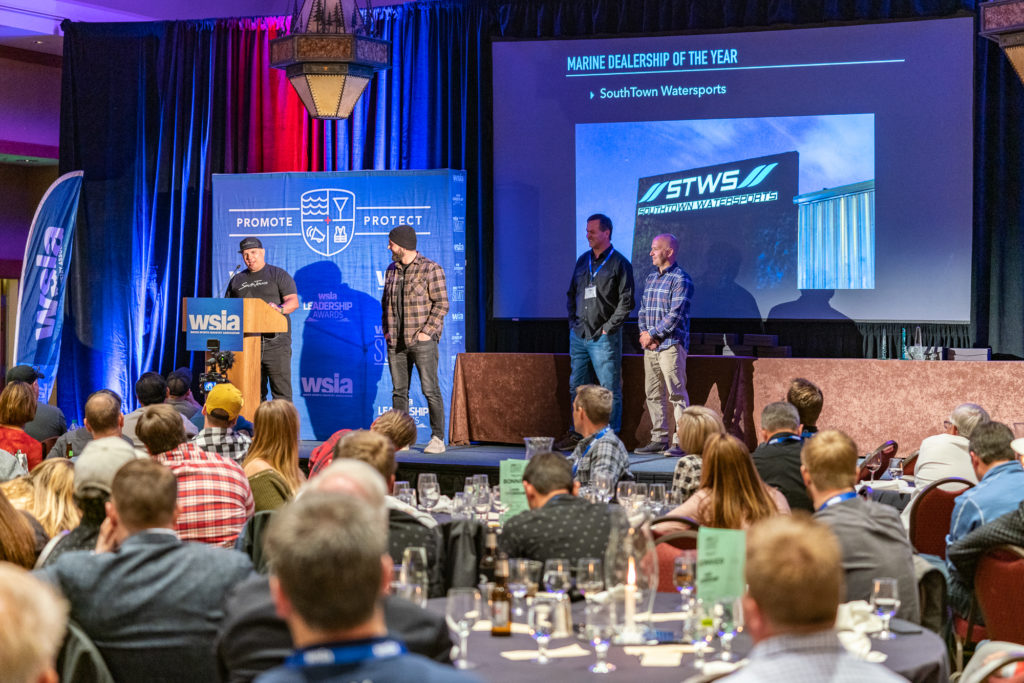 Sales Rep of the Year

This honor was presented to a rep who worked tirelessly to educate both consumers and retailers, promote and represent their brands with the utmost enthusiasm, and make a strong impression on everyone they met. This award, also known as the 110% Award, honors nominees who go above and beyond expectations, those who are doing it because they not only love the towed water sports community but also respect the opportunity to connect with partners.

This year’s award went to Andrew Adkison, who reps for Connelly. Adkison began his relationship with Connelly back in 2003 when the company sponsored him as a professional wakeboarder, and now he has won Sales Rep of the Year with the same team. “I certainly have to thank Connelly. They took a chance on me back in October 2003 as a rider, and then again when I threw my name in a hat and transitioned in 2014.” Also giving credit to the other nominees, he continued, “What’s interesting is that a lot of those other reps’ names who were up here have helped me a tremendous amount through the years, including this year. It’s really a group effort, so thank you to all you guys.” 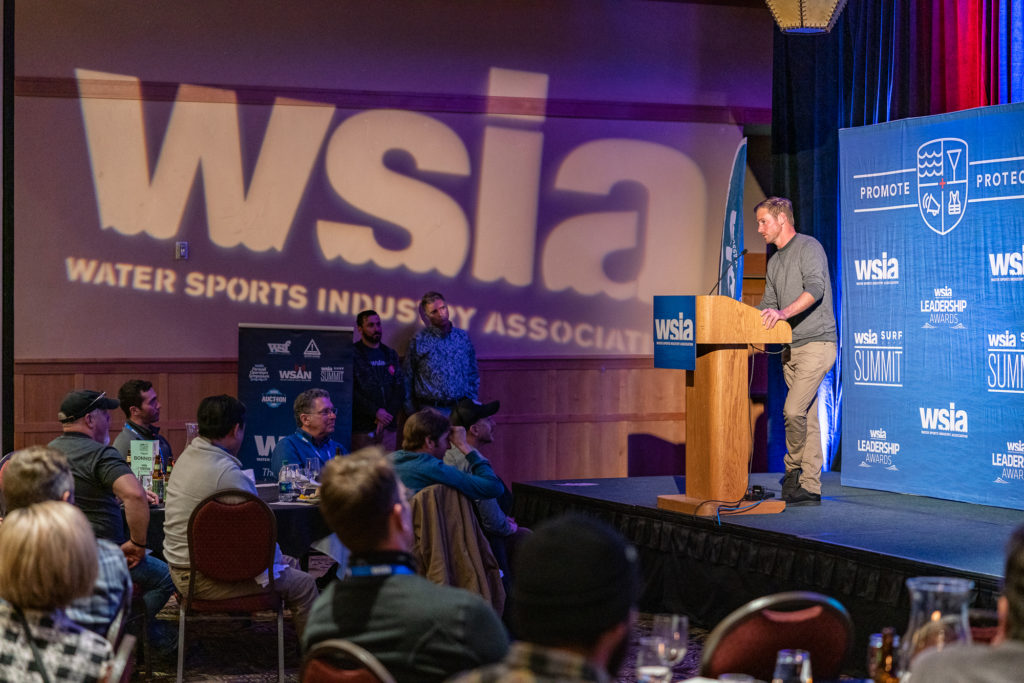 The Larry Meddock Award honors a person or charitable group who has gone above and beyond to promote or grow the water sports community, not for their own financial gain, by volunteering, helping underprivileged groups, or starting an organization that grows or promotes the sport.

This year’s recipient has served many years with Wake the World, has hosted nine events in his region annually since 2012, volunteers his time hosting a huge retreat on Lake Shasta called Big Kahuna, hosts lake days for his local church, and the list continues. He’s also on the Oregon State Marine Board, working on wake issues and helping to resolve conflicts to keep our rivers and lakes open for all users. “Everything he’s done for our sport has come with absolutely no compensation. He does it because he cares, he loves water sports, and he loves people,” says WSIA executive director Kevin Michael.

Vince Castronovo walked on stage to accept his award, and told us that his life changed when he saw a video online from Wake the World Texas. Vince contacted them, and they put him in contact with Greg Hodgins. Vince and Greg talked for an hour, and soon after, Vince was hosting his first event. This was back in 2012. “At the first event, we had 24 boats and 120 kids. This year, we had 42 boats and over 170 kids. It’s been a challenge, but there’s been a lot of motivation. I never would have thought that I could organize or be a part of something this big. It’s amazing, and I’m proud to represent the boaters, the manufacturers, and everyone that’s involved with boating.” 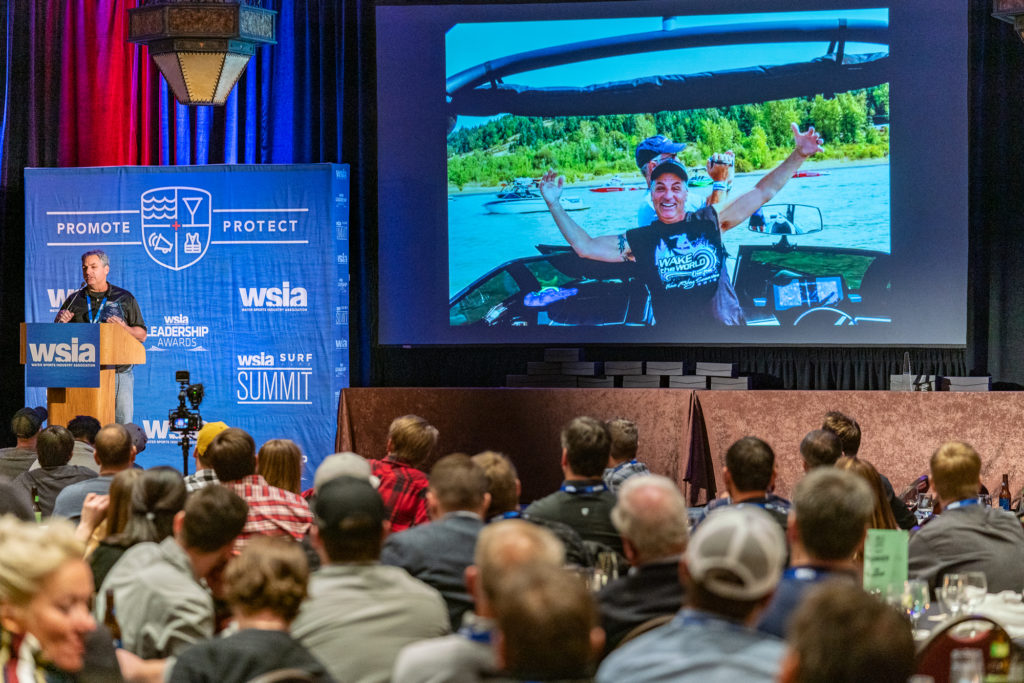 The Lifetime Achievement Award is the highest honor and recognizes an individual whose career has been dedicated to the progression and promotion of towed water sports.

President of the World Wake Association, Shannon Starling, was last year’s recipient, but was unable to attend the ceremony in 2018. This year, however, he was in attendance and was called to stage to give a late acceptance speech. “I believe a person can measure their achievements by all the faces that they remember and by all the people that have helped pick them up. Those are the people that I want to thank. I’m thankful that today, 30 years later, I’m still talking to these people. I still call them partners, I call them mentors, and I call them friends.”

The 2019 Lifetime Achievement Award was presented by Kevin Michael and Larry Meddock, who both spoke highly of this year’s recipient. “This man commands respect of every room he goes into. He has great intellect, great advice, and great wisdom.”

This year’s Lifetime Achievement Award went to Thom Dammrich, president of the NMMA. “We are all better, we are all stronger, we are all more successful when we work together. I can assure you that the NMMA will be your partner to address these [current issues] moving forward.” 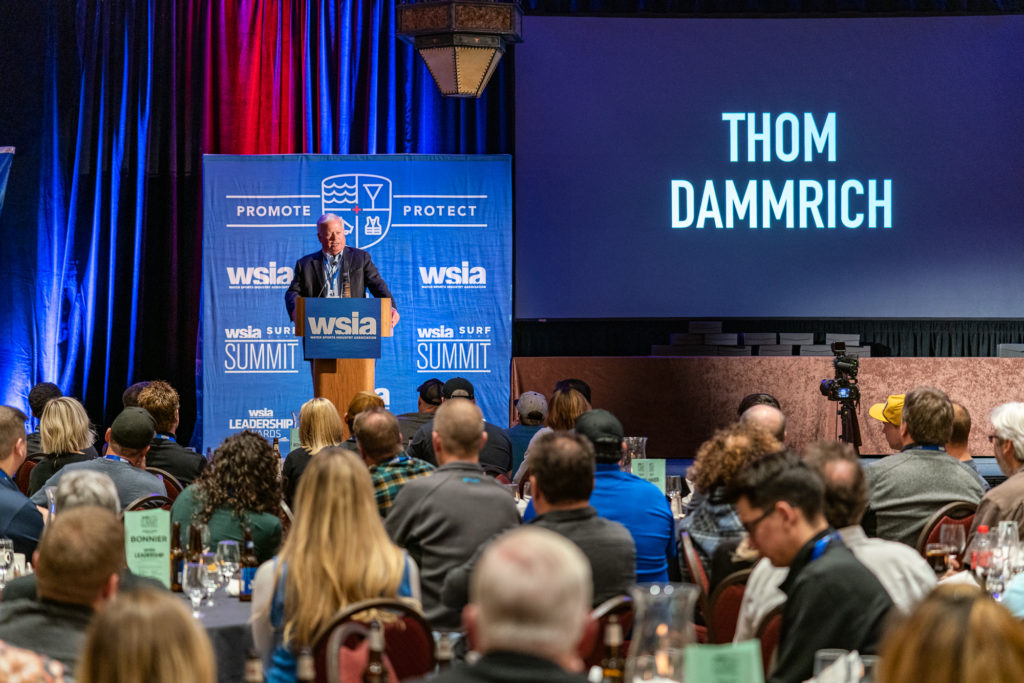 This accolade recognized industry leaders and their products that have push the towed water sports marketplace to new heights over the past year. These honors were presented to manufacturers (boat, hard good, or soft good) who produced a new product having innovative distinction from other products currently manufactured in the towed water sports industry. Congratulations to all deserving recipients.

VIEW ALL PHOTOS FROM 2019 SUMMIT AND LEADERSHIP AWARDS >>