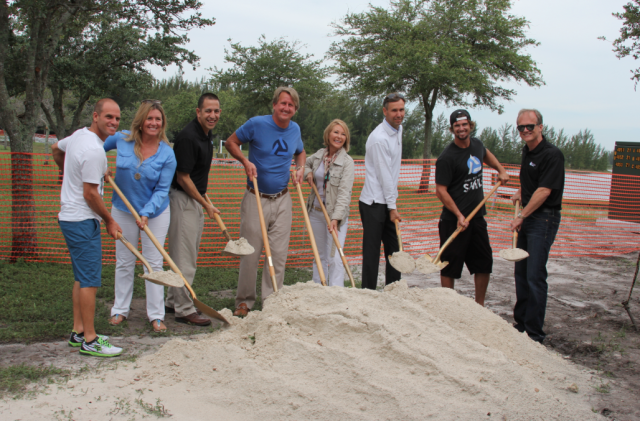 Completion of Miami Watersports Complex is scheduled for October 2014, and it is expected to draw wakeboarding enthusiasts, professional competitors and world-renowned competitions to Miami. The park will be situated on a 90-acre fresh water lake that will be equipped with two full-size cables and one two tower cable (which will be dedicated to Aktion Park’s renowned “Get Up Guarantee” program). Currently the park offers boat lessons behind the award-winning Super Air Nautique G23.

“The Aktion Parks team is thrilled to move forward in partnership with Miami-Dade County Parks on the Miami Watersports Complex, and the ground-breaking ceremony is the first milestone of many to come. We are truly excited to have the opportunity to introduce watersports to the diverse population living in and visiting South Florida,” stated Correct Craft President/CEO Bill Yeargin. “MWC is the second of many new cable parks Aktion will be announcing in the years ahead; we are excited about the future!” Yeargin added.

Aktion Parks, a subsidiary of Correct Craft, delivers customers an active, watersports lifestyle that is safe, healthy, family friendly, and environmentally conscious. Aktion Parks owns and operates Miami Watersports Complex and Orlando Watersports Complex, one of the first cable wakeboard parks in the U.S. and one of the most well-known parks in the world. To learn more about Aktion Parks visit www.aktionparks.com or follow us on Facebook at www.facebook.com/aktionparks.

About the Miami-Dade County Parks, Recreation and Open Spaces Department
Nationally accredited, a three-time winner of the NRPA National Gold Medal Award, winner of the 2013 Florida Governor’s Sustained Excellence Award and the 2009 Florida Governor’s Sterling Award for excellence in management and operations, Miami-Dade County Parks is the third largest county park system in the United States, consisting of 260 parks and 12,825 acres of land. It is one of the most unique park and recreation systems in the world. Made up of more than just playgrounds and athletic fields, it also comprises out-of-school, sports-development, and summer-camp programs; programs for seniors and people with disabilities; educational nature centers and nature preserves; environmental restoration efforts; arts and culture programs and events; the renowned Zoo Miami and the Deering Estate at Cutler; the Crandon Tennis Center, home of the Sony Open; golf courses; beaches; marinas; campgrounds; pools; and more. For information about Miami-Dade County Parks call 3-1-1, or visit www.miamidade.gov/parks/. It is supported by The Parks Foundation of Miami-Dade.