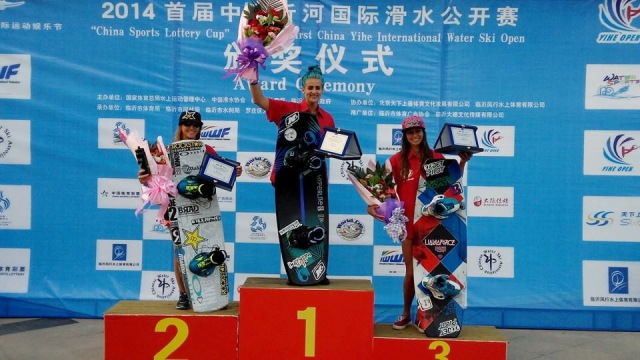 Injuries had kept Merritt sidelined for much of the 2014 pro wakeboarding season, but she received her doctors’ clearance to compete again shortly before the World Cup in China. With very little practice and time on the water, Merritt missed the cut in her semi-final heat. In the last-chance qualifying round, however, she managed to secure a spot in the finals. Riding in the worst seed position, she went off the dock and threw down an incredible run in extremely rough conditions, posting a score of 73.22. While other riders in the women’s division rode well, they couldn’t match the intensity of Merritt’s performance. Amber Wing (AUS) took the silver medal and Bec Gange (AUS) took bronze.

“I am so stoked about the way things turned out,” said Merritt. “I’ve been feeling good ever since I got to China, but it’s been a long road. This year was bittersweet for me. I have been recovering from injuries, but to be able to ride against the best women in the world was amazing. All of the women have stepped up their game, so falling was not an option. On the dock in finals, I knew I needed to ride my best. Once all the women had ridden and I saw the final scores, I was so excited that I had won. Winning in China is such a great way to end the season.“

Merritt grew up in Lantana, Florida, and began competing when she was 11. She lives and trains in Orlando, and is studying business in college. She is sponsored by Nautique Boats, Hyperlite, OrigAudio, Rollei Actioncam, Proof Eyewear MonaVie, Peripheral, Wakami, and Breathe Boardwear. For more information about Merritt, visit: www.raimimerritt.com. Fans can also connect with her at Facebook.com/MerrittRaimi, Twitter.com/MerrittRaimi, and Instagram @MerrittRaimi.