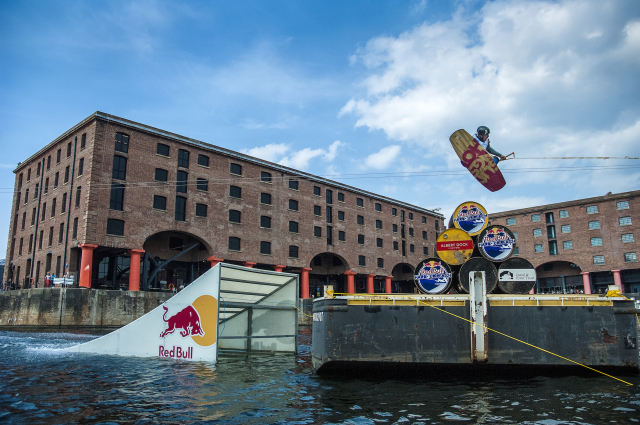 Liverpool is set for a rude awakening this summer as one of the most talked about wakeboarding events, Red Bull Harbour Reach, descends on the city for the second time.

Taking place at Albert Dock on Saturday 30th August 2014, the free to attend event will see 20 of the world’s top wakeboarders compete and entertain spectators in one of the region’s most iconic locations.

Last year saw more than 8,000 people turn up to enjoy the sunshine, and this year is set to be bigger than ever as wakeboarders reach new heights on the Mersey water.

The athletes will test their skills on a purpose-built wake course that is designed to push their agility and technical abilities to the max, with wakeboarding legend Parks Bonifay on hand to judge them on their performance.

It is also the first time that a UK competition has had access to Liquid Leisure’s innovative Unit Pool Gap, a unique feature that will bring a range of tricks, jumps and falls to the competition.

Parks Bonifay commented: “Red Bull Harbour Reach is one of the standout events in the wakeboarding calendar, and this year it’s going to be bigger than ever!

“The guys are going to be challenged like never before and will have to really raise their game if they want to master the Pool Gap.”

Wakeboarding is one of the world’s fastest growing water sports and new wake parks are frequently popping up across the UK, with Liverpool’s Industry 1 recognised as one of the country’s flagship locations.

Derived from surfing and waterskiing, using Sesistecs System 2.0 Cable System, the wakeboarders are towed along at speeds of up to 30mph and are able to jump upwards of 15m in distance.

For more information check out: www.redbull.com