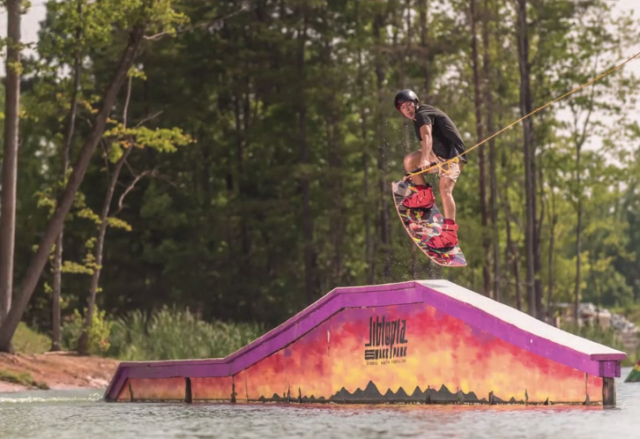 It’s the start of September which means all the big brands in the watersports industry travel to Florida to showcase their new collections to the masses. Jobe traveled to Orlando to do exactly this and built their Wake Park booth from the ground up to make sure their products get the attention they need.

As Jobe realizes not everybody is able to make it to Surf Expo they don’t want to let you sit at home waiting for someone to post a low resolution photo on their Facebook wall. Instead of releasing their 2015 products in small parts like so many other companies do they made the decision to blast you with the full collection at once. Yes, you hear it right. We have the exclusive honor to introduce to you: Jobe Wake Park – The 2015 Collection.

First up is the all new Wake Park video, featuring almost the entire Jobe International Wakeboarding team shredding both TNG Cablepark in France and Jibtopia Wake Park in the United States. Watch high profile riders like the Cohen brothers, Austin Hair and Jon Dickey absolutely destroy the cables in a way you wouldn’t expect from your average wakeboarding video. We get a closer look behind the scenes of what happens at a catalogue shoot for a high end wakeboard brand. Very fun and innovative to see is how Jobe blends video with photography by linking the wakeboard edit with their physical 2015 product catalogue. You have to see it to understand what we’re talking about. Speaking of the 2015 product catalogue. We have that too!

The Jobe Wake Park 2015 Catalogue needs no explanation. A catalogue filled with 2015 wakeboards, bindings and soft goods delivered in a way no other brand has done before. Innovation seems to be the key word Jobe had in mind while working on their newest collection because this sure does look “next level”! The catalogue is designed to look like an online website, featuring elements like a navigation, search bar and winking at the use of social media on their Media Madness page. The guide is filled with straight up killer photography by both USA-based photographer Chris Garrison and Netherlands-based photographer Ydwer van der Heide. This guide is the prime example of how to use design and photography to take your brand to the next level.

So take your time and enjoy watching both the Jobe Wake Park movie and the 2015 Jobe Wake Park product catalogue as one of the first. Happy September!