Win a Centurion Boat and Ford Truck from BoardCo.com and Maverik 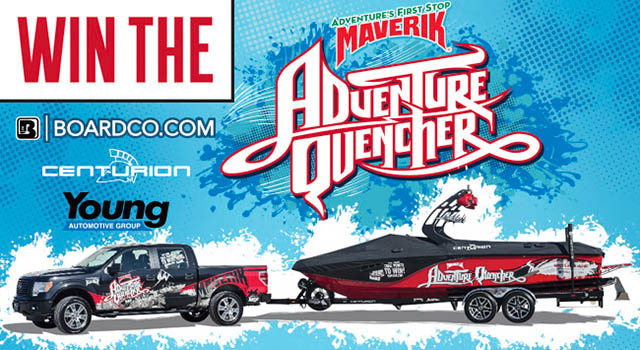 Maverik, Adventures First Stop, has partnered with BoardCo.com, Centurion Boats and Young Automotive Group to offer the king of all giveaways – The AdventureQuencher Sweepstakes, the largest sweepstakes giveaway in the history of watersports.

The AdventureQuencher sweepstakes includes not only a brand new fully loaded 2014 Centurion FX44, but also a 2014 Ford F150 4×4 Supercrew to tow it! Just sign up at Maverik.com to be qualified to enter.

There are a number of ways to win:
1. Spend Trail Points at Maverik.com
2. Purchase Any Size or Refill Maverik Dispensed Fountain Drink, Hot Beverage or Chiller.
3. Mail in a 3×5 Card Entry

10 Qualified entries will be randomly selected for a final drawing at a live event.
1 Grand prize will be awarded along with 9 second prizes.

Win a Centurion Boat and Ford Truck from BoardCo.com and Maverik