Would you barefoot in this? Harf and Ruck did... well, tried to, at least...All Photography: Cortese

If we had known that 15 minutes late would actually end up being 2 hours early we would have stayed in bed and caught a few extra ZZZ’s, but come to think of it, Feet on Fire is probably twice as good of an experience with an extreme hangover and lack of sleep. It puts you in that mind-frame where you just don’t give a s**t, you know? Who cares that the dock is sinking and there are spiders crawling up your shorts? Who cares that there is a goat eating your burrito next to the 6-foot tall 1,000-pound Buddha sculpture painted with black and white spots to resemble a cow? Who cares if there’s one foot of wind chop as you attempt to step off of a slalom ski at 40 miles per hour for your first time ever? These are the questions that simply never came up at Feet on Fire 6… until now. I guess that’s what two kegs of beer at 9:30 in the morning will do to a crowd looking for a good time.

As usual, everyone who is anyone in the industry made an appearance at some point during the day, and even Michelle Soven (yes, the mother of the famous Soven trio) entered into the event. What’s even more impressive is the fact that she took out the famous Thomas Weinacker, “Krazy Kelman, ” and in round 3 battled head-to-head with Zane. Eventually Zane took the W against Michelle, but it was in no way an easy battle for either of the participants. The two literally had a “too close to call” 1st ride in the 3rd round, so the crowd called for a re-ride in which Zane was finally able to clearly advance. Congratulations to Michele for eaning herself a 5th place title at the event. Michelle wasn’t the only female to hit the waters during the event either, Alexa Score also made a valiant attempt to step off in round two, but unfortunately she was swallowed by the rough water. Regardless, it was great to see the ladies join in on the action in 2010 and we look forward to even more female participants in 2011.

Other highlights of the day included the newly crowned Dean Smith singing the Australian national anthem in the opening ceremonies, and then following it up with two failed attempts to even make it up to speed while trying to start barefooting off of a wakeskate from the sitting position. Dean claims that he has attended every Feet on Fire event, which basically means that he has had a total of 2,190 days to learn to step off of a waterski, but apparently he needs more time…? Haha. Kidding Dean, The World Champ does what the World Champ wants! Remember that…

In the end there were no surprises as the final came down to Chip and Zane. I really have no idea who Chip is or where he comes from, but I do know that he is feared tremendously at the Feet on Fire events. Zane had his work cut out for him, but in the end came out on top with his second Feet on Fire title. Watching all of the competitors foot in what will easily go down as the worst conditions ever for Feet on Fire was impressive, but watching Zane do it with ease forced the rest of us shake our heads and get back in line for beer. Look for a video on the site soon, which you are sure to enjoy because the crashes this year were epic.

Dan-O putting the running order together. 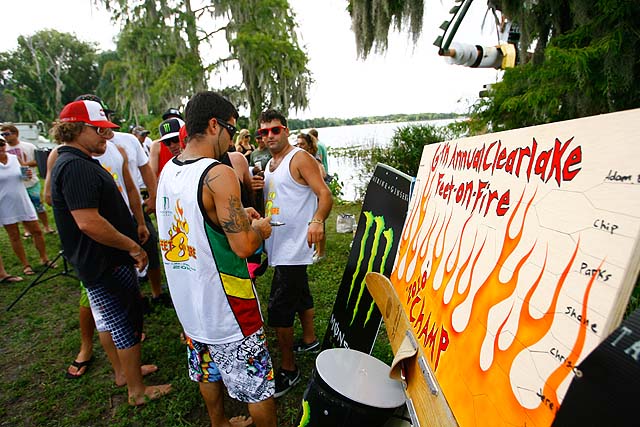 Big thanks go out to Monster Energy Drink, Chipotle Restaurants, Mastercraft Boats, Fox, and of coarse Dan-O, Kelman and Watkins for making this event a success once again!