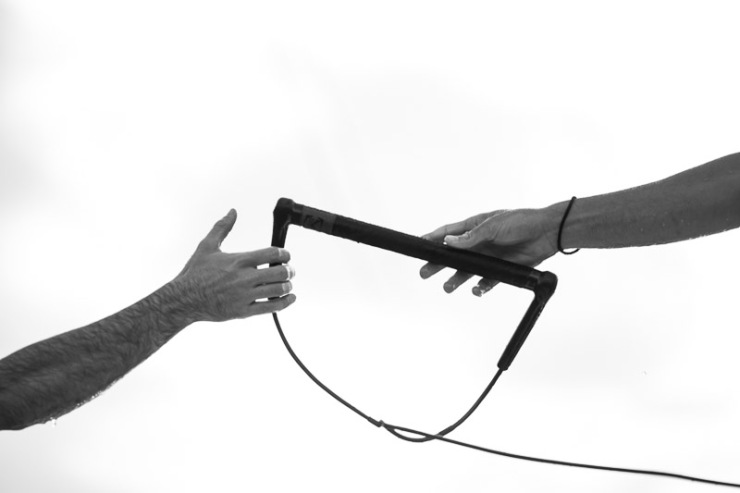 Focal Point – The Power of Us

The Power of Us

Note: This is the Focal Point from the Oct/Nov ’14 issue of Alliance Wake.

Wakeskating is much more than just riding with friends… Reed Hansen and Matt Manzari at Battle Falls   Photo: Cortese

No, this isn’t a love letter to wakeboarding and wakeskating.

Wait, scratch that. Yes it is. But not to the sport – that is, the physical act of riding sideways across water. No, this is a love letter to you – the riders, fans, industry insiders, enthusiasts, and weekend warriors who make wakeboarding and wakeskating so special.

I spent the better part of a week trying to organize the battered range of thoughts and emotions that overcame so many of us back in early July and put them to paper. But how do you mentally manage the devastatingly unexpected? A heavy heart is a hard one to explain in a just few paragraphs – even with the highest of hopes and the unadulterated support of so many. However, without fail, every time I typed, deleted, and re-typed again, one point continued to linger – sticking around like that one ray of sunshine through the thunderclouds: the thought that our community is both passionate and full of compassion, diverse but tight-knit, strong but unbelievably caring. Our community is remarkable, and we’re lucky to be part of it.

To just simply say July was a hard month for wakeboarding and wakeskating would be a gross understatement. It was so much more than that. Within a week’s time we had two fallen brothers who suffered horrific injuries and as I write this we don’t know if they’ll ever ride again. Coming off of an incredible performance at the Red Bull Rising High event in Austria – having landed a double tantrum to blind – Brad Smeele was hitting the big air setup at Lake Ronix when he landed awkwardly and crushed his C4 vertebrae. Days earlier, Matt Manzari was trimming tree branches at his church from a high-reach when he was electrocuted by power lines and severely burned over both arms, his chest, and neck. Miraculously both Brad and Matt survived – either injury could easily have been fatal – but they have very long, arduous roads ahead of them. One tragic accident for sports as small as ours is hard enough to handle – two seemed impossible.

Almost instantly support started pouring in from all over the world – showcasing just how tight the bond can be when riding across the water is the common thread uniting a diverse group. Riders stepped up and organized everything from donation websites to fundraiser auctions to prayer groups. Fans from all walks of life and corners of the Earth showed their support by sending messages of encouragement via Facebook, Instagram, and much, much more. Within a matter of days both Brad and Matt had significant amounts of money donated toward their recoveries, but more importantly they had the invaluable benefit of positive thoughts. Yes, financial aid will go a long way toward offsetting unbelievably large medical bills, but nothing combats seemingly hopeless circumstances like a worldwide outpouring of hope. That is what will get them through the darkest of days and toughest of times ahead, and that is what so many of you have provided in such spectacular abundance.

While my heart has been heavy since Brad and Matt were injured, I am forever hopeful for each of them because of not only who they are as individuals – strong, determined, and lovers of life, but also because of who and what they are surrounded by. We as wakeboarders/wakeskaters/wakesurfers love to ride, but more importantly we love each other because we ride. This sense of community truly is remarkable and the outpouring of affection for both riders is a testament to that. I wish that neither of these tragedies had ever taken place, but that’s not the way life works. The task now is to look forward, embrace the future, and continue being a community of support and reprieve for Brad and Matt. Knowing both guys, if these accidents had happened to any of their fellow riders, they would be doing the same thing as we are for them. I am beyond proud of the response to Brad and Matt’s accidents, and to be able to call myself part of that community is humbling. So thank you, each of you, for making our small sports so special. It is comforting to know that when the going gets tough, the tough get going, and you all never seem to shy away from being tough. The fortitude and collective kind-heartedness displayed over the weeks since Brad and Matt’s accidents are what I kept thinking about while trying to write this article. I know they are what Brad and Matt and their families are going to lean on in the days, weeks, months, and years ahead.

I’ve been asked a few times about the photo I got of Matt Manzari and Reed Hansen passing the handle to each other that was used for this article. Here’s the back story.

I took this photo of Reed and Matt riding together at Battle Falls in April 2013. For some reason it never ran in any issue of the mag. Over a year later I found myself struggling to write my Editor’s Letter after the tragic accidents suffered by Matt and Brad. It took me well over a week to write the column that is in the Oct/Nov issue of Alliance Wake, but as soon as I was done I knew which photo was going to be used. It was as if it had been waiting for the right time and place – and it fit perfectly, almost poetically, even with the heavy circumstances of the time.

Matt and Reed are best friends and they’ve undoubtedly handed a handle back and forth to each other countless times. I’d like to think this picture represents their bond; past, present, and future. Reed’s support of Matt (and the industry’s, and even strangers’ from around the world) has been unbelievable and inspiring. I’m hopeful that one day in the future I can take another photo like this one. And do the same for Brad, too. Thanks wakeboarding and wakeskating for being awesome.

I am also happy to report that both Brad and Matt are doing well. Brad was able to go back home to New Zealand to continue his therapy and recovery. His positive attitude and outlook inspire everybody around him and his updates via social media are seemingly more encouraging each time as he works toward his goal of walking agin. Matt and his wife Bobbye-Jean recently welcomed their son Justice to the world on January 6. Miraculously Matt was out of the hospital months before doctors predicted as nearly all of his skin graft procedures took. The road to recovery for Matt still consists of days of unbearable pain and rehabilitation, but he is happy to be home and excited about being a father. He even had eye surgery recently to repair cataracts caused by the electrocution and can now see better than before.

Both Brad and Matt’s stories are incredible, and even more incredible when you factor in the love, support, and positive-vibes coming in from around the world for each of them following their accidents. Please continue to send them those well-wishes and donations, they do more than you can possibly imagine.