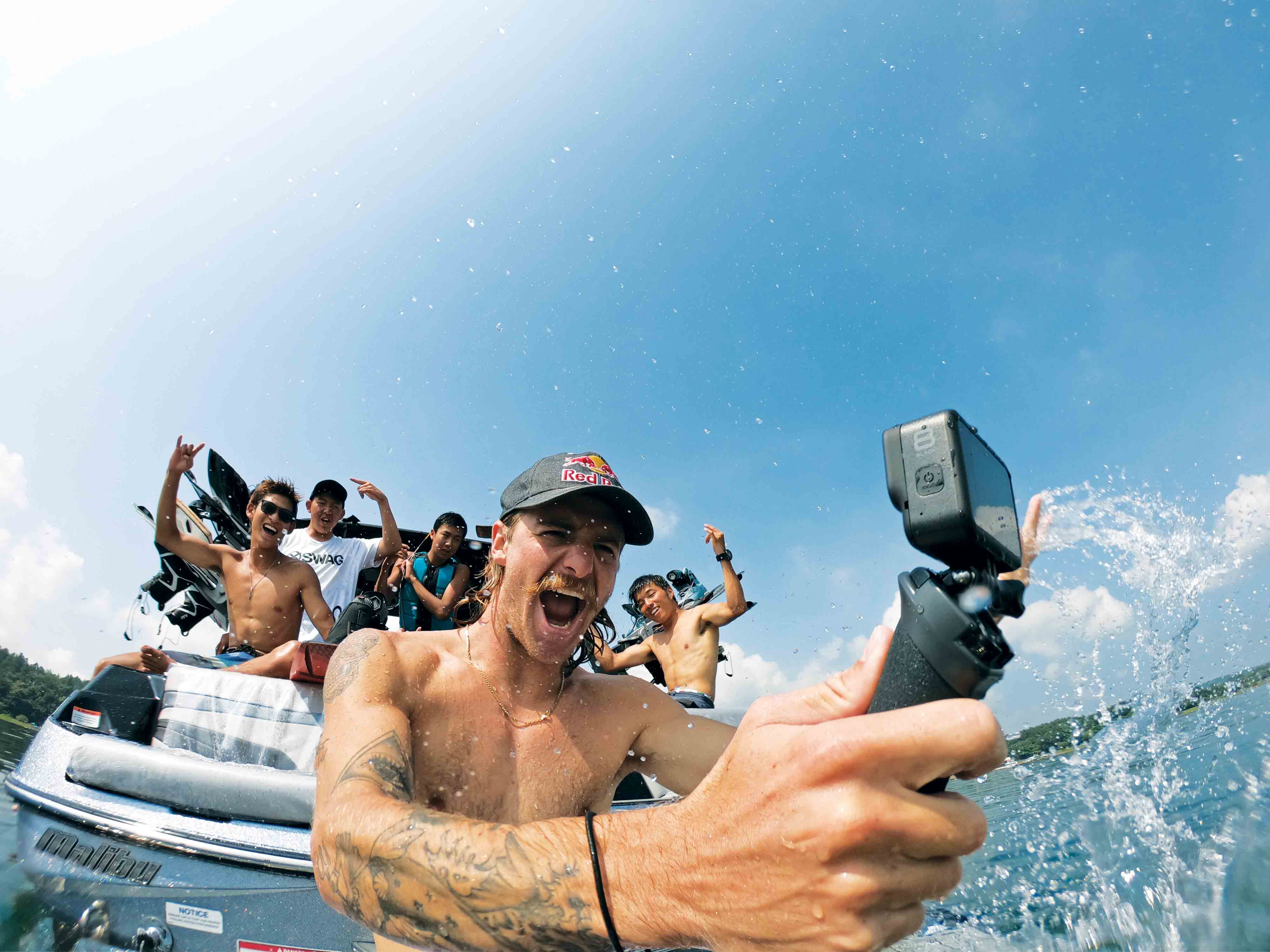 Massi stoking out the locals

Japan is one of the most visually unique countries on the planet. It’s bustling, high-tech cities sit in stark relief to the pastoral, agricultural lands that surround them. This contrast presents an incredibly dynamic pallet of popular culture and time-honored origins. From architecture, animation, cars, action sports, entertainment and fashion, no other group on the planet blends history, technology and expression quite like the Japanese. 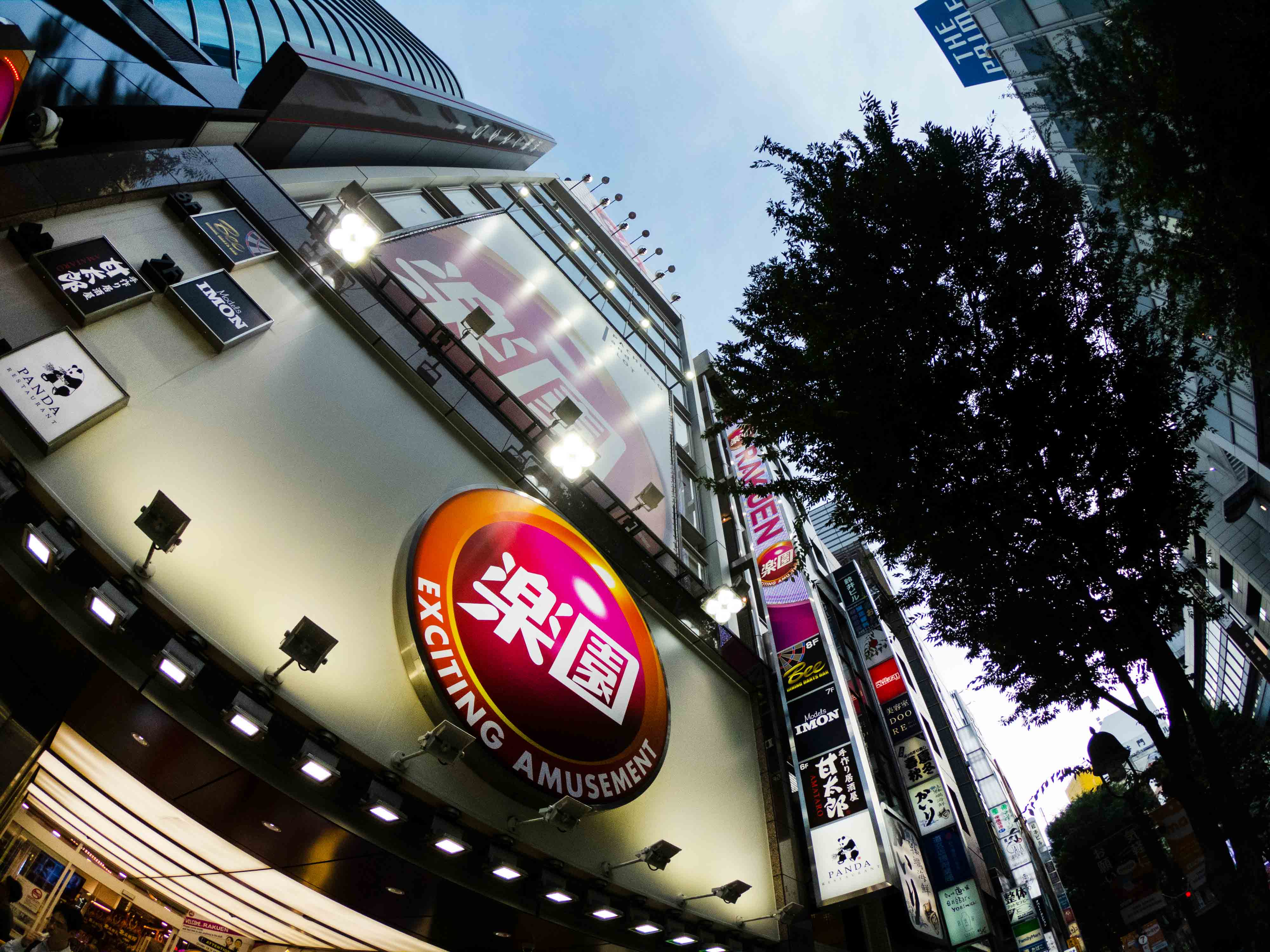 Fortunately for us, the sport of wakeboarding has had a dedicated core following in Japan for the past two and a half decades. In the beginning, wake athletes traveling to the Land of the Rising Sun experienced a fanfare reception similar to visiting rockstars. The sport was new, exciting and something the Japanese locals, while passionate about, had little access to. Fast forward to today and the Japanese wake scene has grown, but still carries the same passion and stoke witnessed in the mid 90’s. From waterways weaving through downtown Tokyo to the county lakes nestled in the shadow of  Mount Fuji, the Japanese riding scene is unique and has access to all of the latest wake technology our industry can provide. Like most things in Japan, their interpretation of the sport is super unique, creative and full of an expression unlike anywhere else in the world.

Compelled by the attraction that is all-things Japanese; it’s riding scene and incredible food and culture, we journeyed there with good friends Brian Grubb, Massi Piffaretti and Bryant Thomas from Malibu Boats to fully embrace and experience life on the water in Japan today. As Japan is perpetually on the front-line of consumer electronics, it was fitting that we captured the entire adventure on the newly launched GoPro HERO8 Black, one of the most powerful capturing devices available today.

Japan has always been one of my favorite places in the world and to be a part of this GoPro + Malibu + Alliance trip made the experience that much better!

The trip started in Tokyo where we got to ride in the bay and through the internal canals downtown. Pretty crazy place to ride. The conditions were tricky since the current was fast and surrounded by sea walls but we still got some epic shots and incredible memories with the crew! 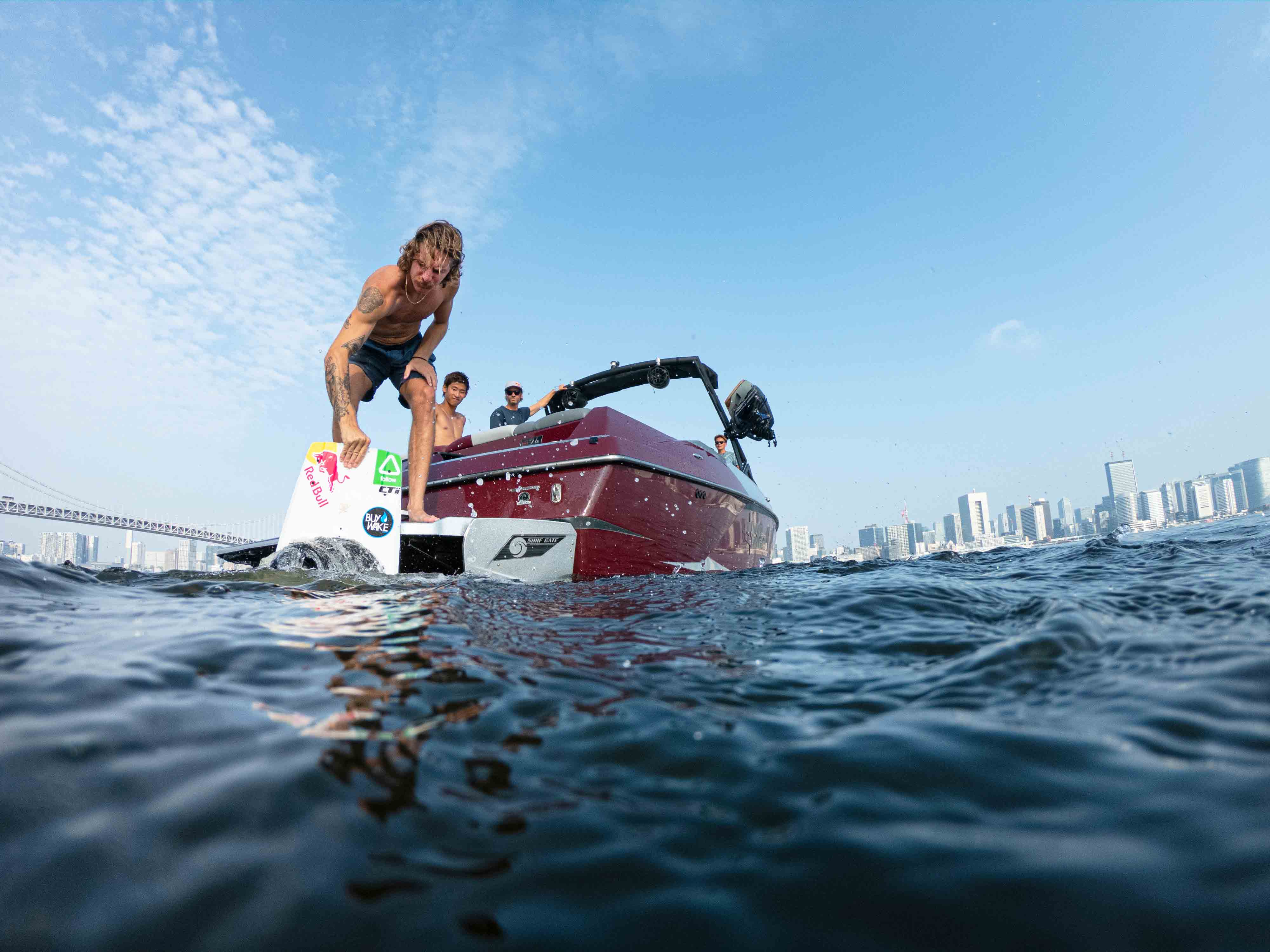 Massi getting ready to send

I think one of the best riding spots was in a canal right by the Tokyo bridge. We actually got some calm water and were able to smash some double ups. I was pretty stoked to be able to hit some good ones in this crazy place.

What was challenging was waking up every morning around 2:30 am so we could be on the water by 4:30 am. I got a bit sick after the first few days but then I discovered my love for ramen noodles and that fixed me up! 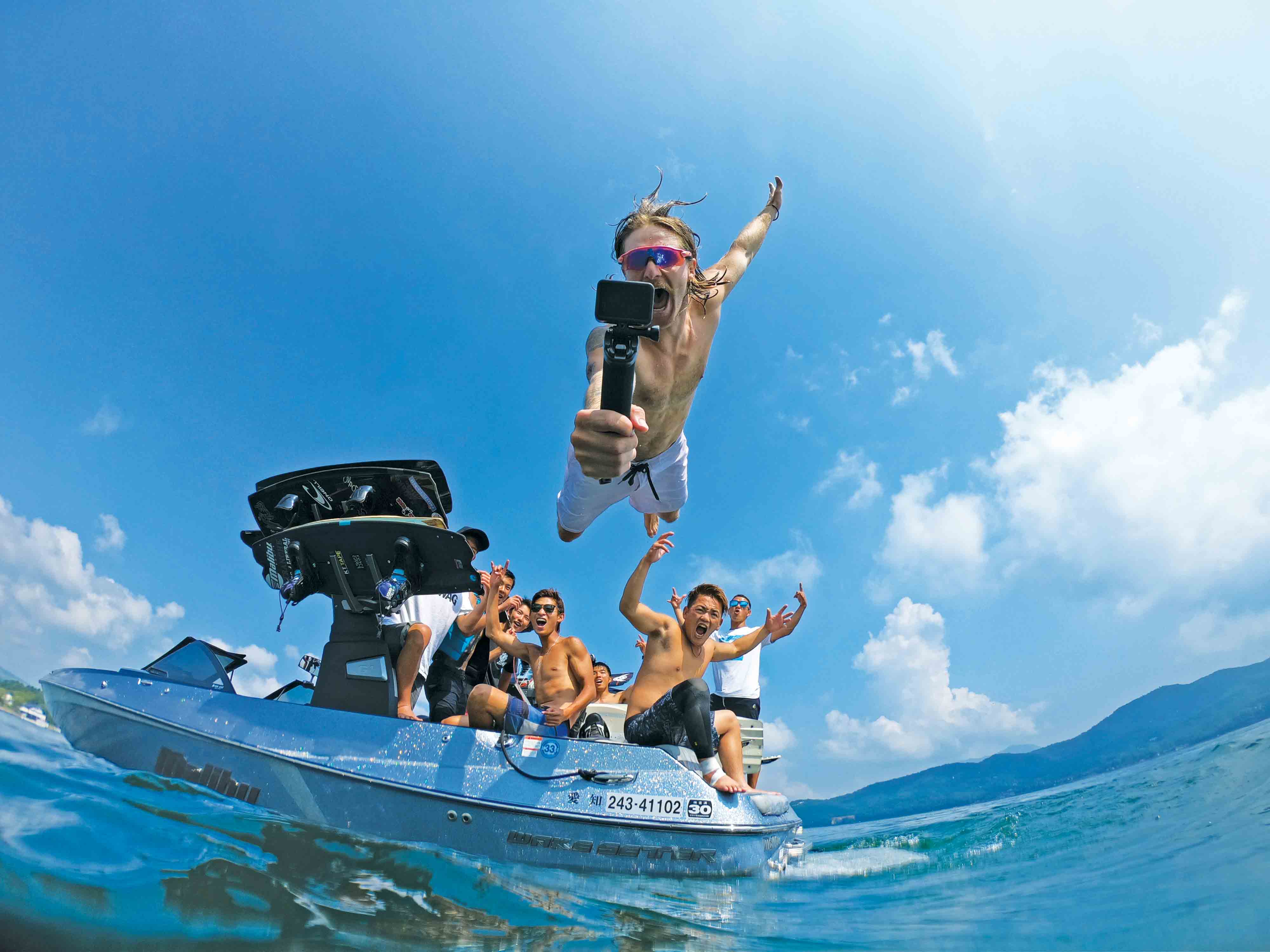 I have heard of Mt. Fuji for a very long time and had never seen it in person, so when I got the word that we were heading that way, I was frothing. The car ride was nuts. The boys fit me over the top of the board bags so I was like 3 inches from the ceiling. It wasn’t so bad, except for that time we almost smashed the guard rail on a left turn.

We showed up at Lake Yamanaka in the late afternoon and it was nice but a bit foggy so we decided to check out some onsen (Japanese springs where people shower). I didn’t get in because of some new tattoos, which was a bummer, but that night we experienced an amazing Japanese firework festival that was completely insane. We had some beers and some food with the locals and enjoyed the whole show! 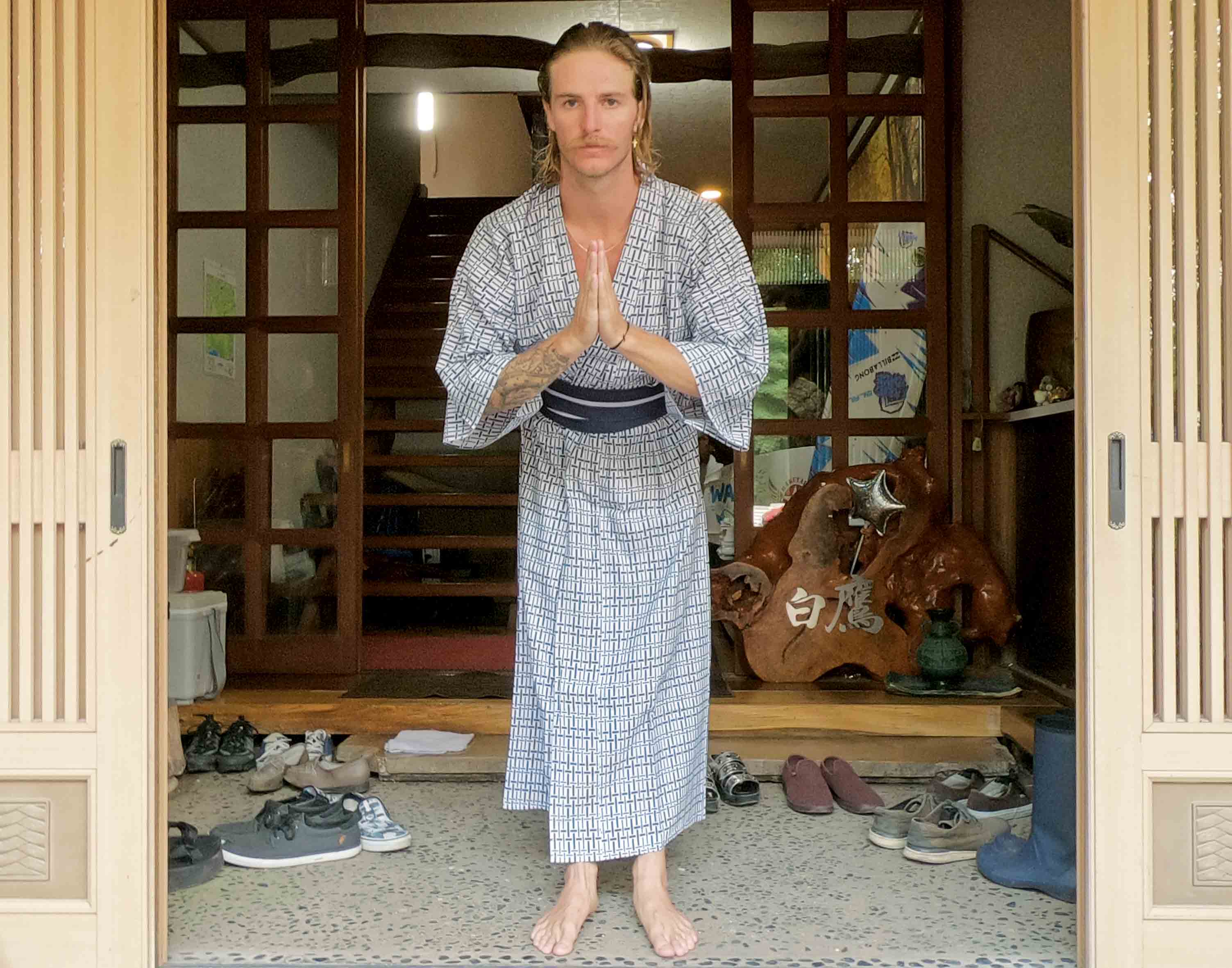 Really getting into the culture…

When we woke up in the morning, the weather was epic! We had a Malibu 22MXZ and an Axis A24 at our disposal and, on top of that, the lake was absolute butter. I think that was one of the best days of my life!

We ended up getting some insane clips with the whole crew that day. That day was the highlight of the trip for sure. All around one of the best trips I’ve ever been on, and to be shooting with my homie Cole Vanthof absolutely made this trip one to remember forever. Thanks to GoPro, Alliance and Malibu for the opportunity and looking forward for the next trip with this crew. 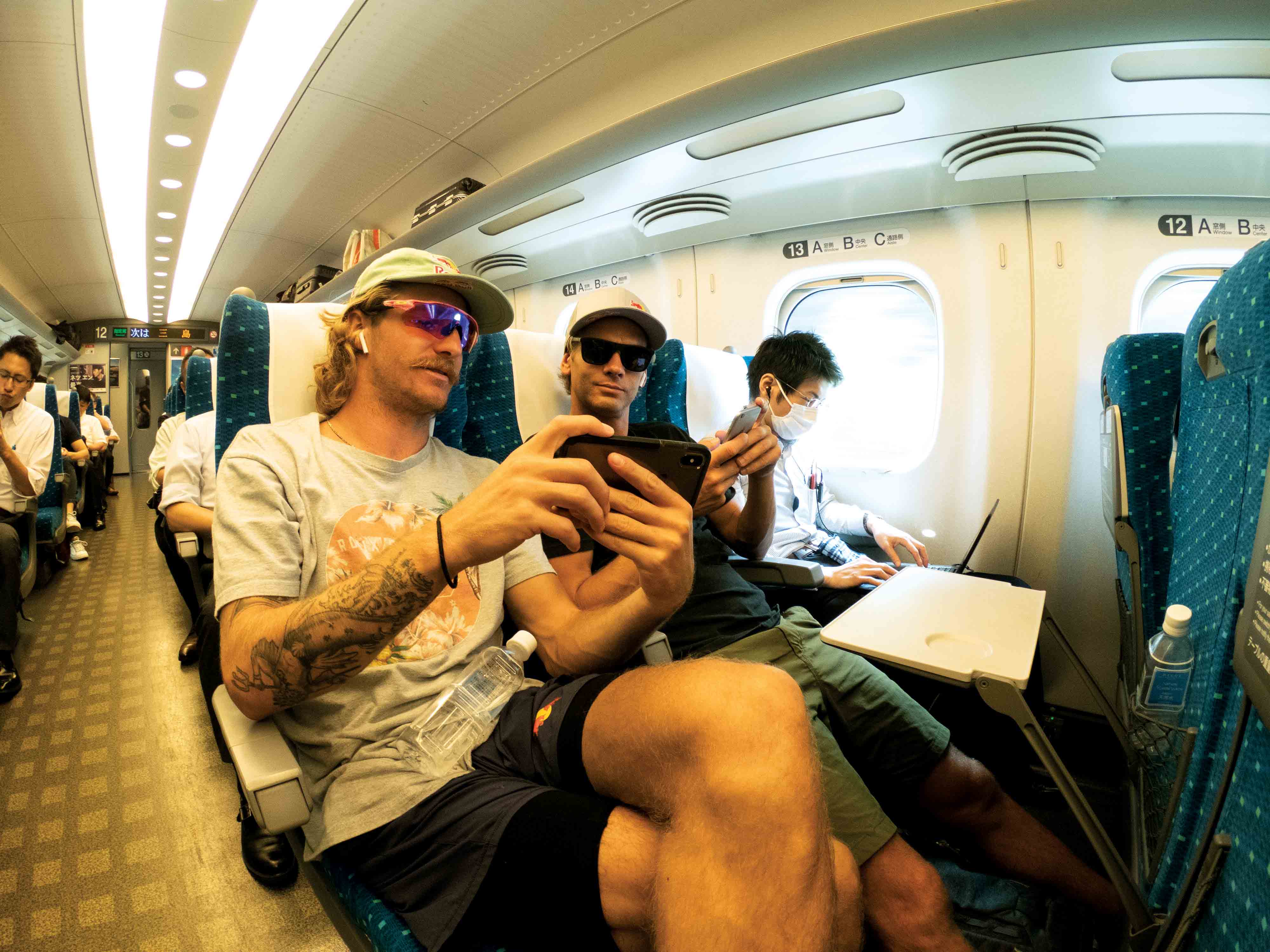 Massi and Grubb not blending in 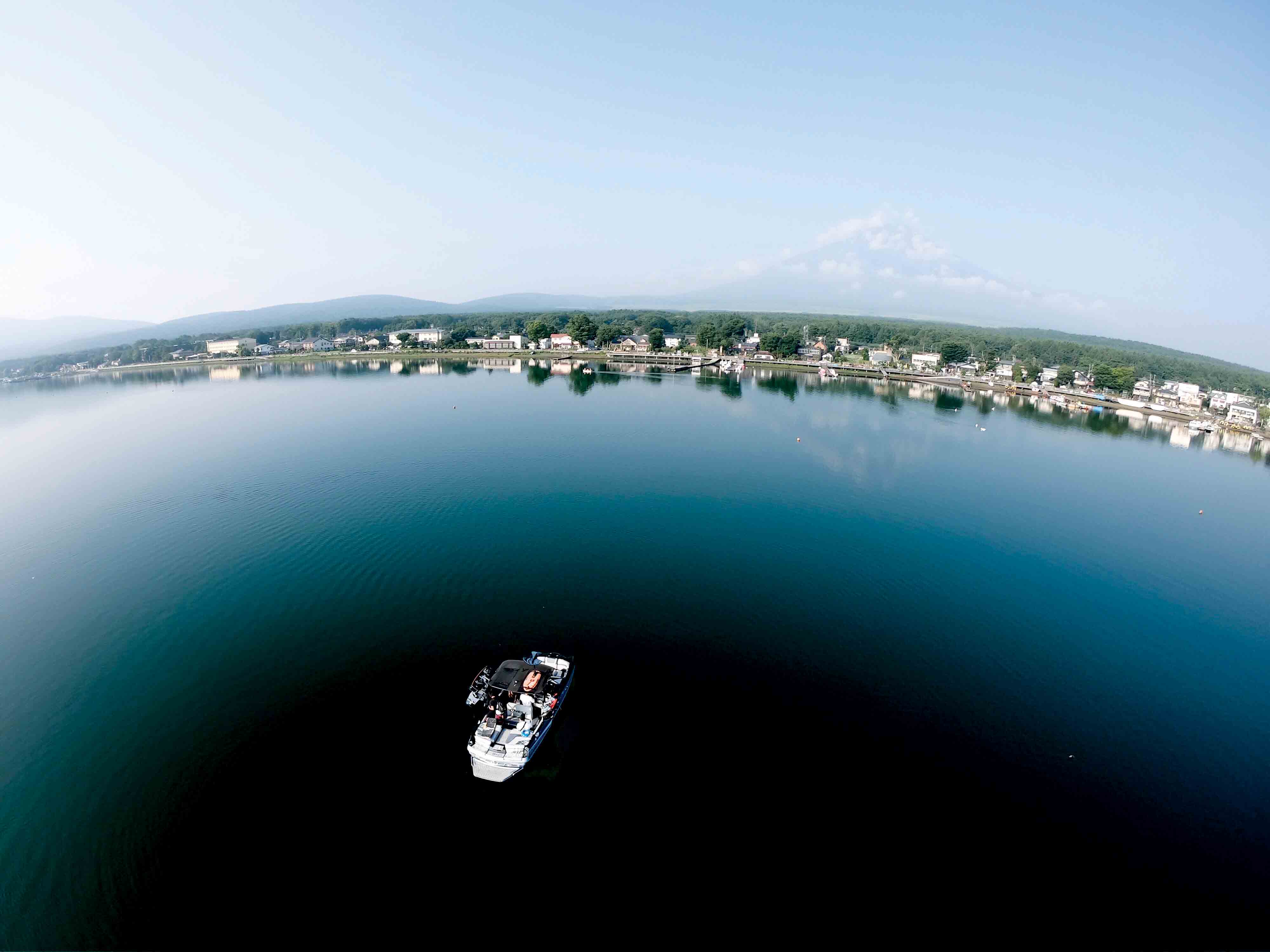 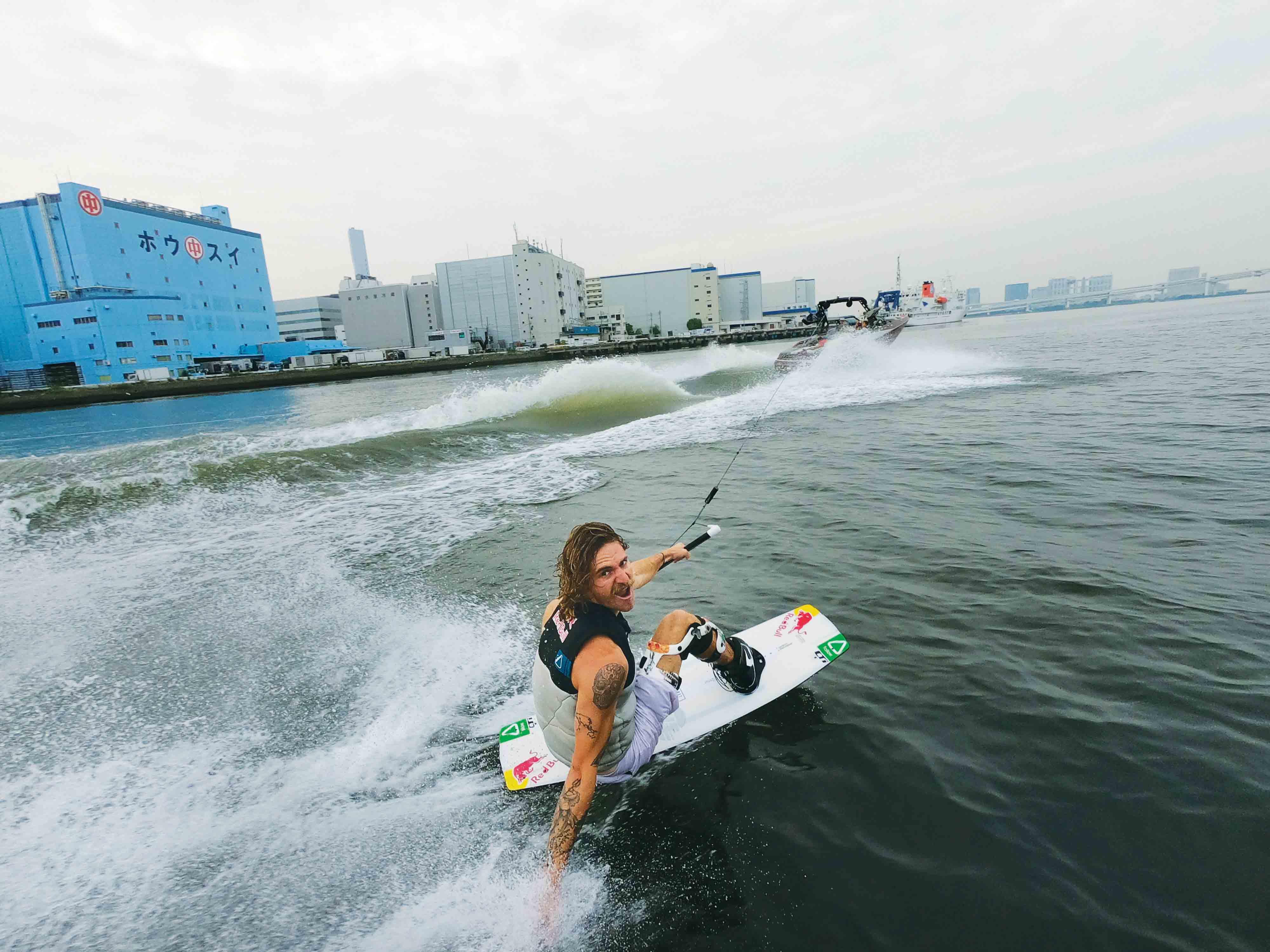 It doesn’t get much better than traveling to a foreign country with your friends and exploring new places to ride. That’s what our trip to Japan was all about and we captured all the action through the lens of the new GoPro HERO8 Black. It wasn’t my first trip to Japan, but it was by far the best. Japan is such a culturally rich place, as well as a naturally beautiful country. Tokyo is a huge city and it was surprising to find so many good spots to ride right in the heart of the city. In contrast, Lake Yamanaka was a quiet lake at the base of Mt. Fuji. We scored perfect conditions and I’ll never forget riding at sunrise behind the Malibu in the shadow of the famous volcano. 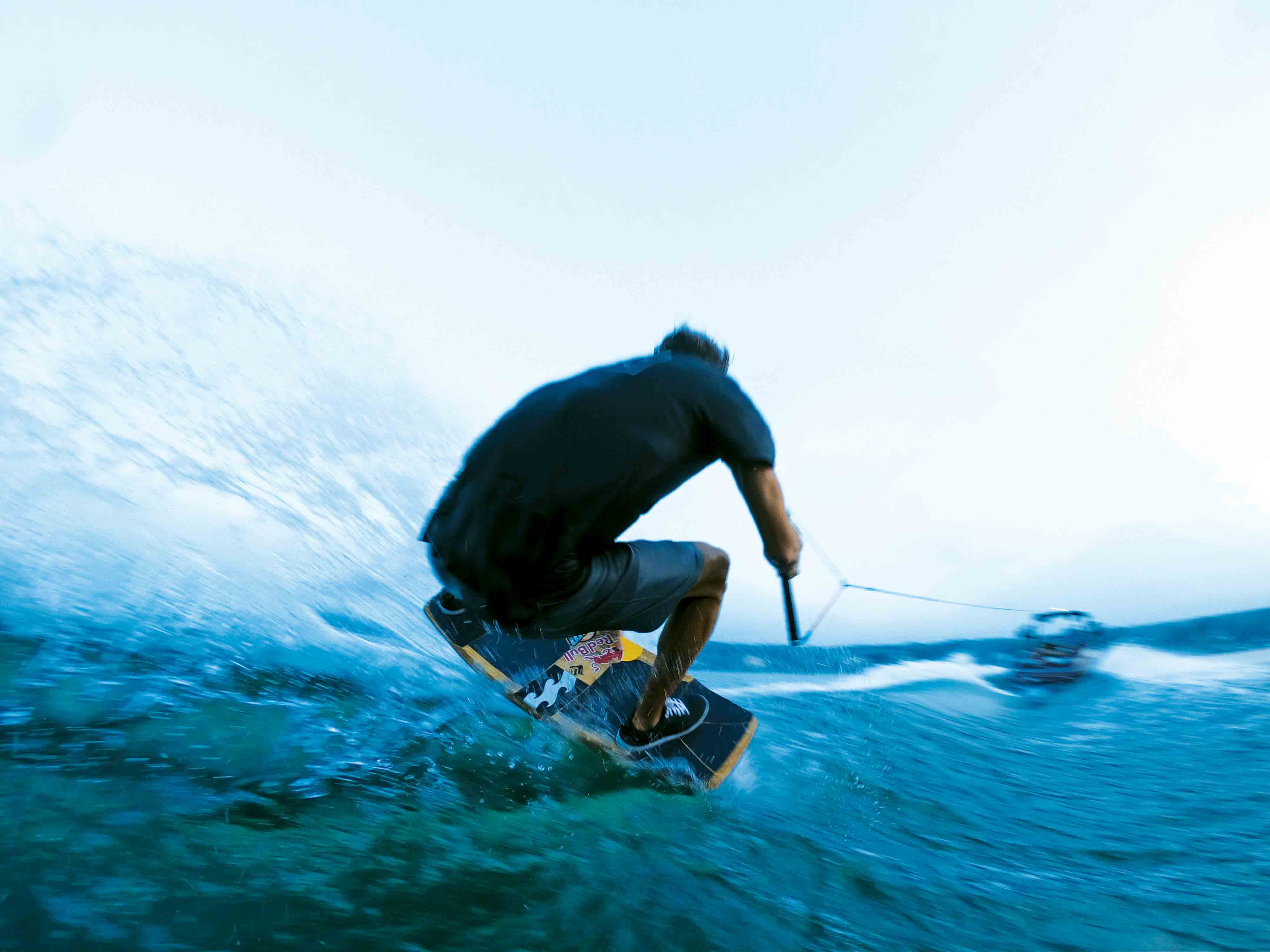 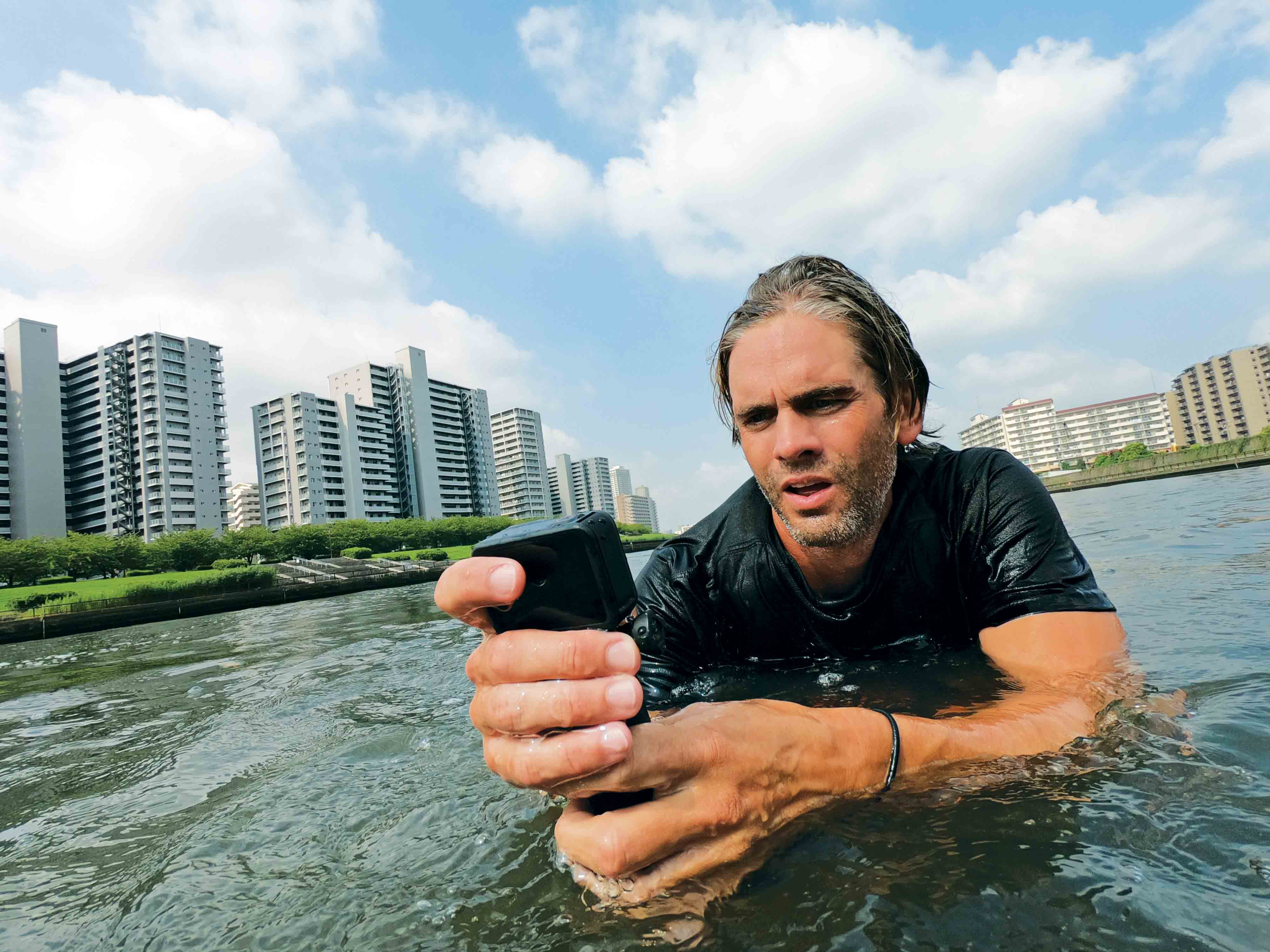 “I think it was recording?” 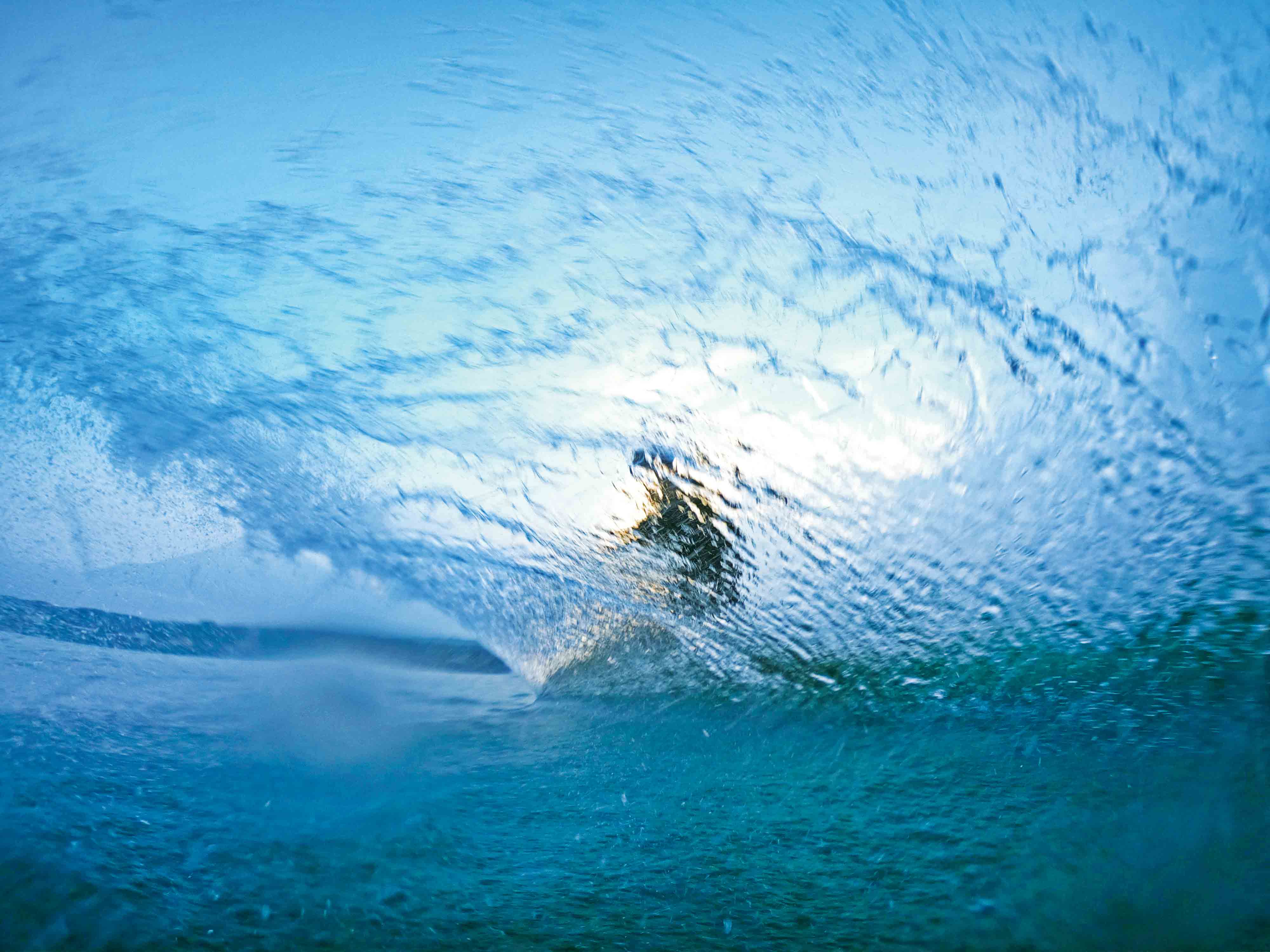 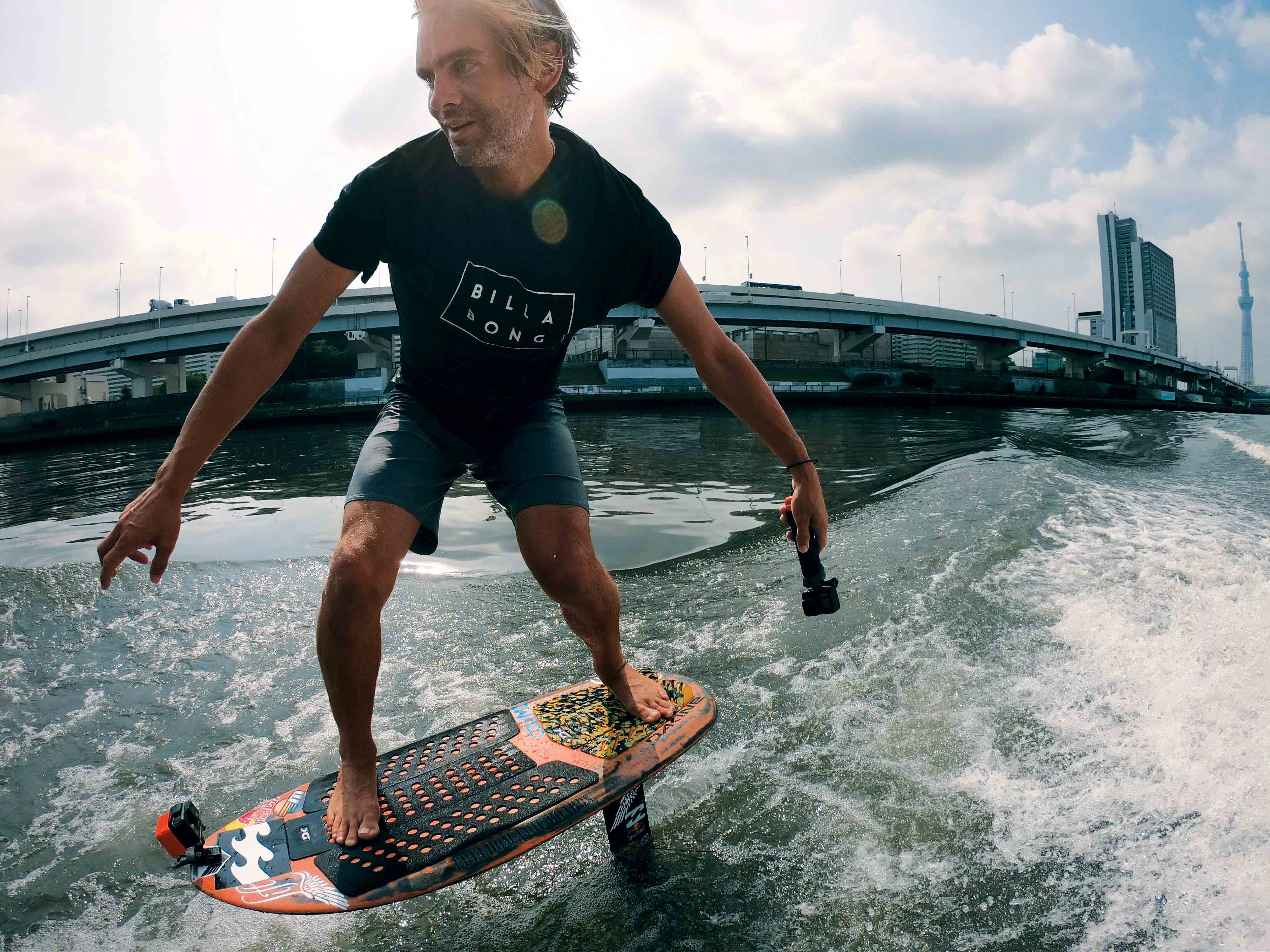 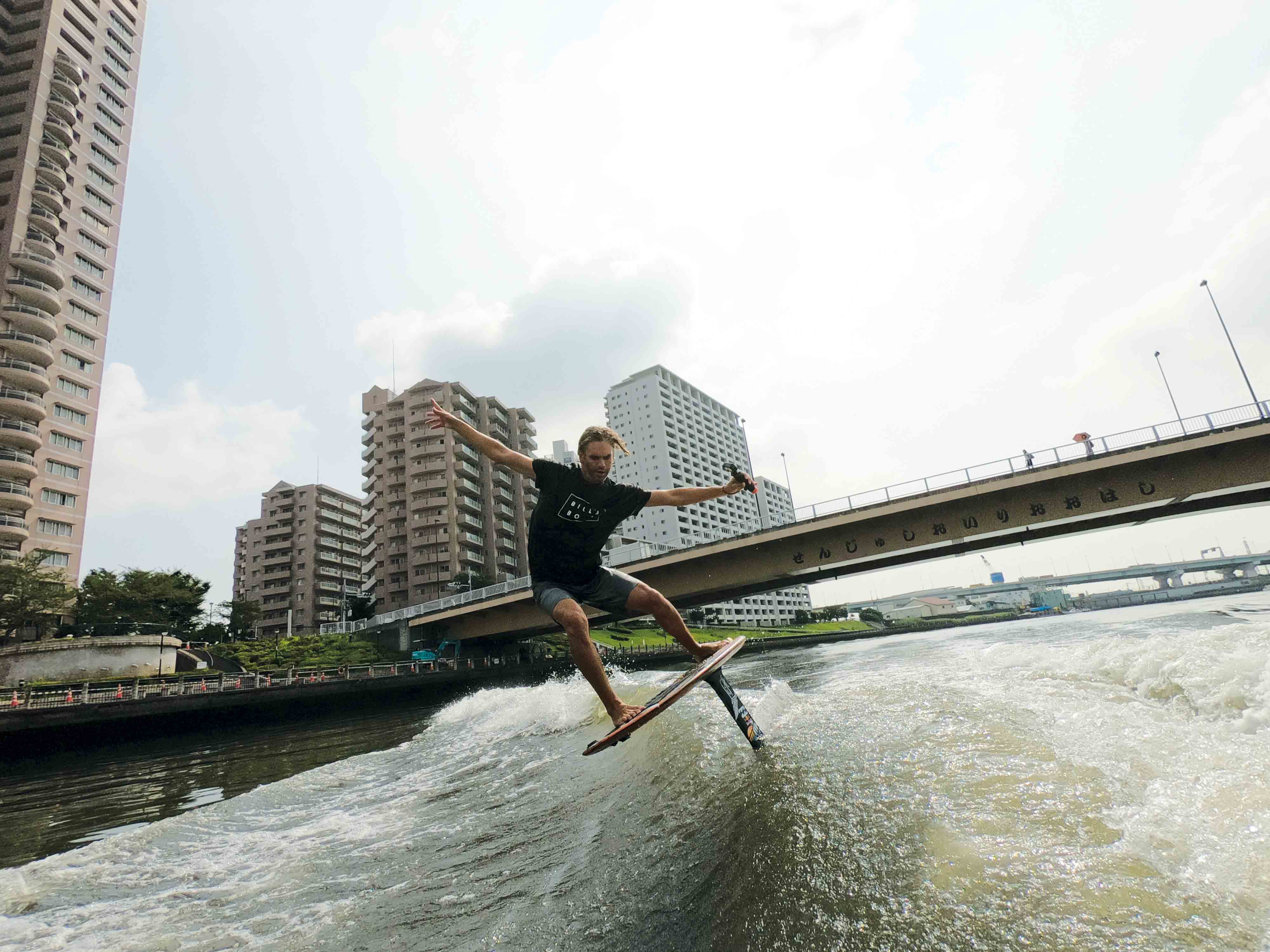 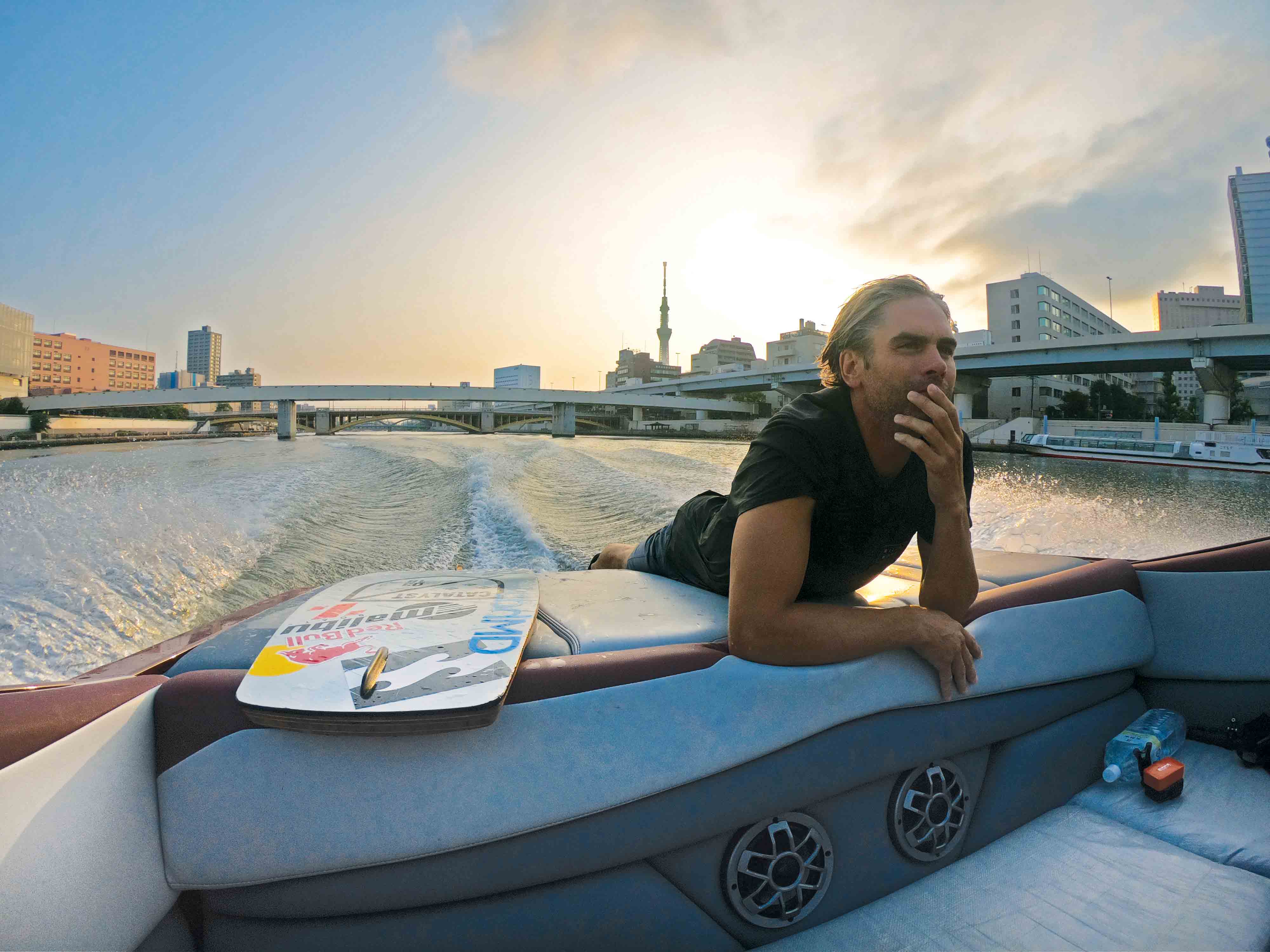 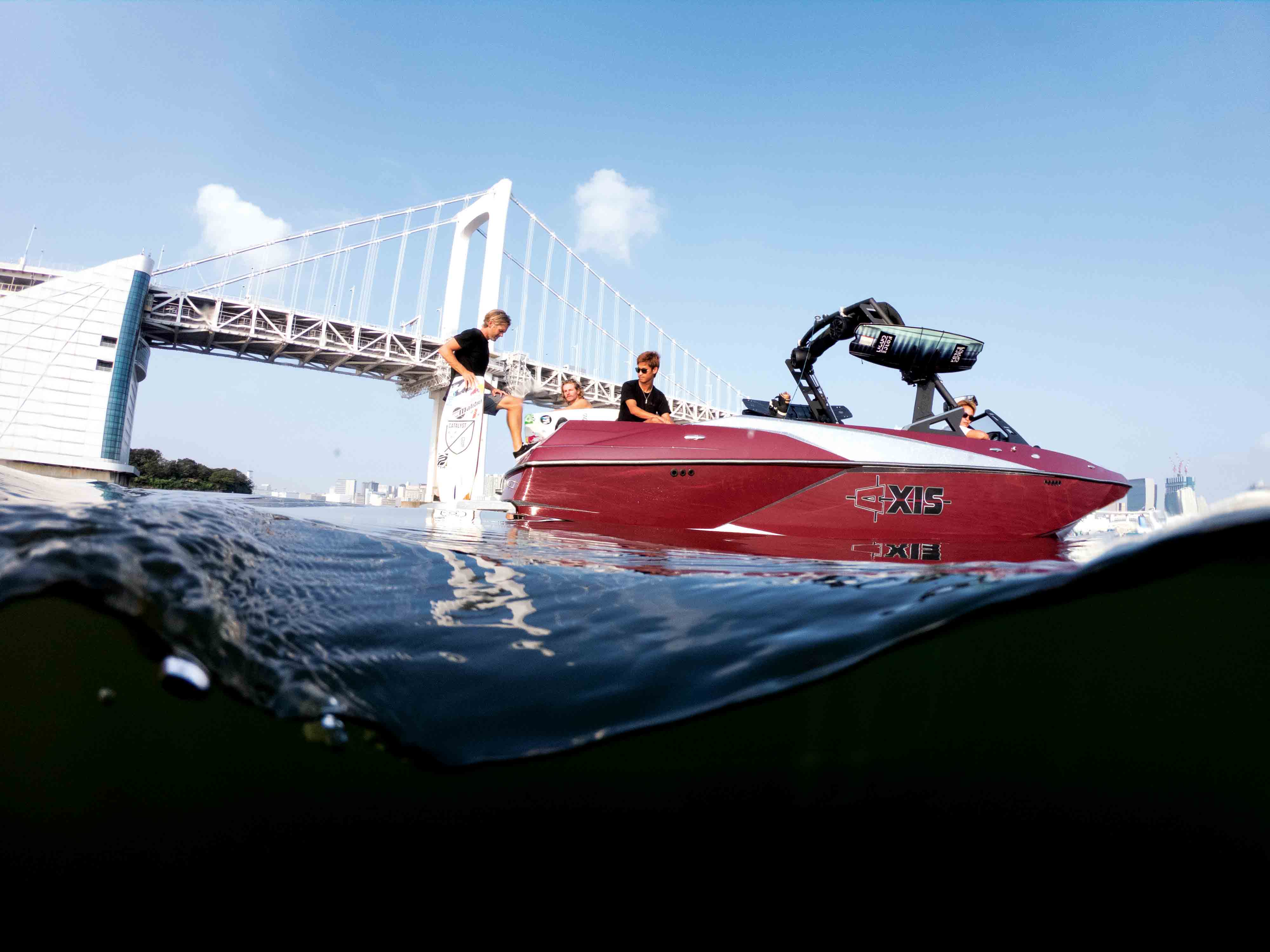 Some over-under with Axis

As a collective group, American (and Canadian for that matter) wakeboarders don’t realize how easy they have it. Waterways are pretty accessible in most areas, gas is relatively inexpensive and we enjoy big, open areas that our equally-as-large tow vehicles can move our boats around without impediment. Not so in Japan. Everything is difficult and harder than it has to be, that’s Japan. It is a country that upholds the rule of law to the nth degree, and maybe a few steps beyond that. However, lying underneath millenia of tradition and social structure that lead the daily consciousness, there is a diehard group of Japanese riders that buck some of that tradition to a small degree. They have found a way to make wakeboarding and wakesurfing a major part of their life. While this is something many of us strive for here in the States, it’s just that much more difficult to do in Japan. This is where Toshiki Yasui and Tada Abe enter the picture. Abe-san, our Malibu and Axis dealer in Japan, is nothing if not a gentleman and a lover of watersports. He has made it his life’s work to promote riding behind a boat in Japan. Toshiki aka Tojo Daddy (by the time you’re reading this, he’ll have just become a new daddy, congrats Toshiki and Sayaka!) is the go big or go home style of wakeboarder the previous generation of riders knew so well. Toshiki has been riding and representing a few brands in Japan over the years but has always beat the Malibu and Axis drum. Standing out like a gaijin (foreigner), he drives big American SUVs with big tires around Japan, pulling his A24 around the island to spread the stoke. Both Tada and Toshiki were instrumental in making this whole thing happen for us. Moving boats around from Kobe to Tokyo and Yamanaka, setting us up in the local rider ryokan (bed and breakfast), 3 am pickups to go ride the rivers of Tokyo, to dealing with Massi’s incessant “yeeeeaaahhhhhhh’s” at 5 am, they and the rest of the Japanese contingent of riders really made the trip incredibly special. Doumo arigatou gozaimasu! 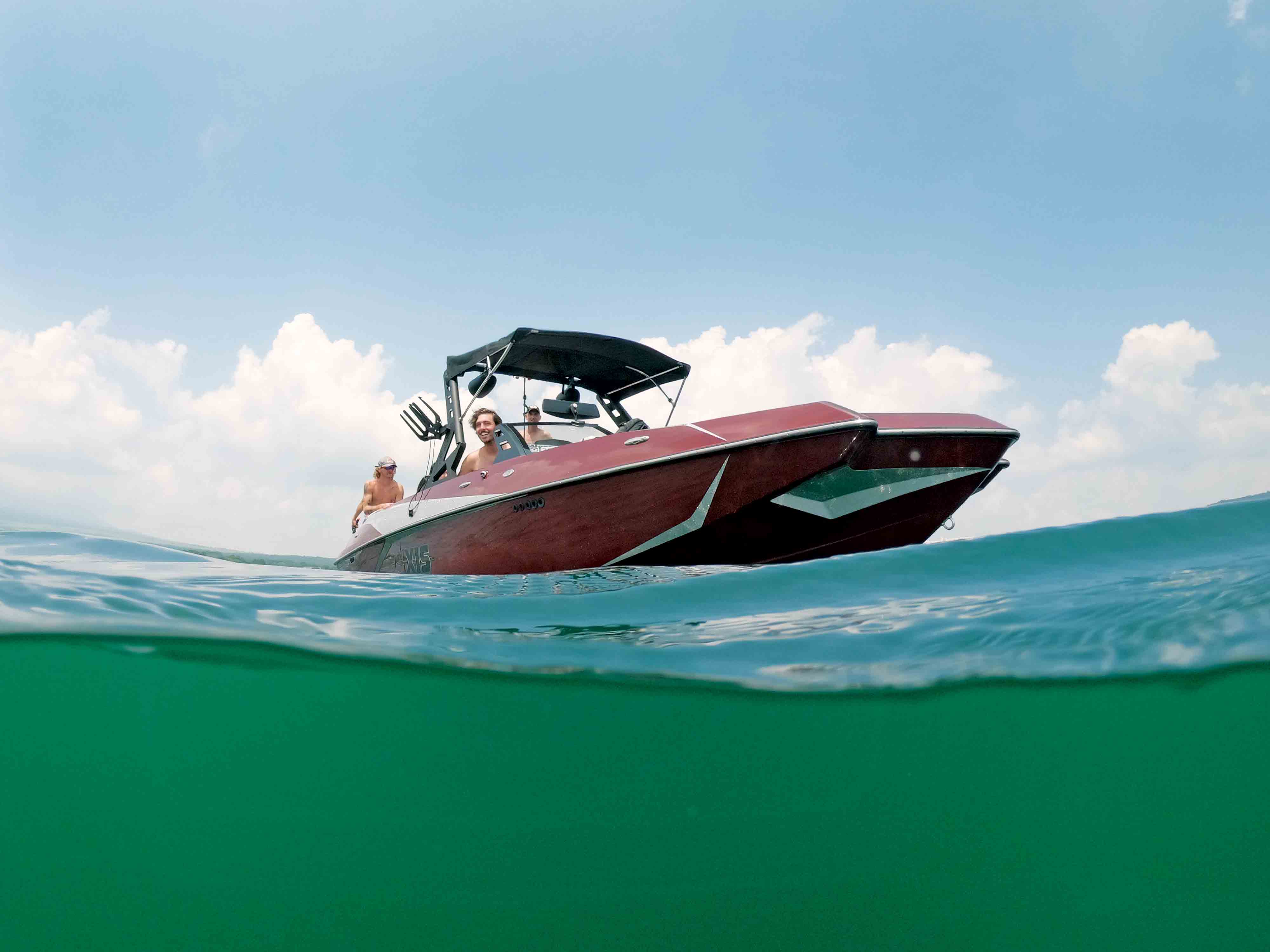 As for the rest of us gaijin, I think we can probably count ourselves as a small handful of people (if not the only) to get to ride in the places we did.  Massi getting the shots he did in the middle of a glassy Tokyo Bay under the shadow of Rainbow Bridge, Grubb foiling through the waterways of downtown Tokyo, arriving to a lakeside festival at the base of Fuji-san – these are experiences that we’ll remember forever. Also, let’s not forget driving two hours back into Tokyo to only find out we had a spider the size of my hand in our tiny van. Then having to drive for another hour in Tokyo traffic knowing this hell beast was in the van with us made for a storybook ending to our trip. Yabai! 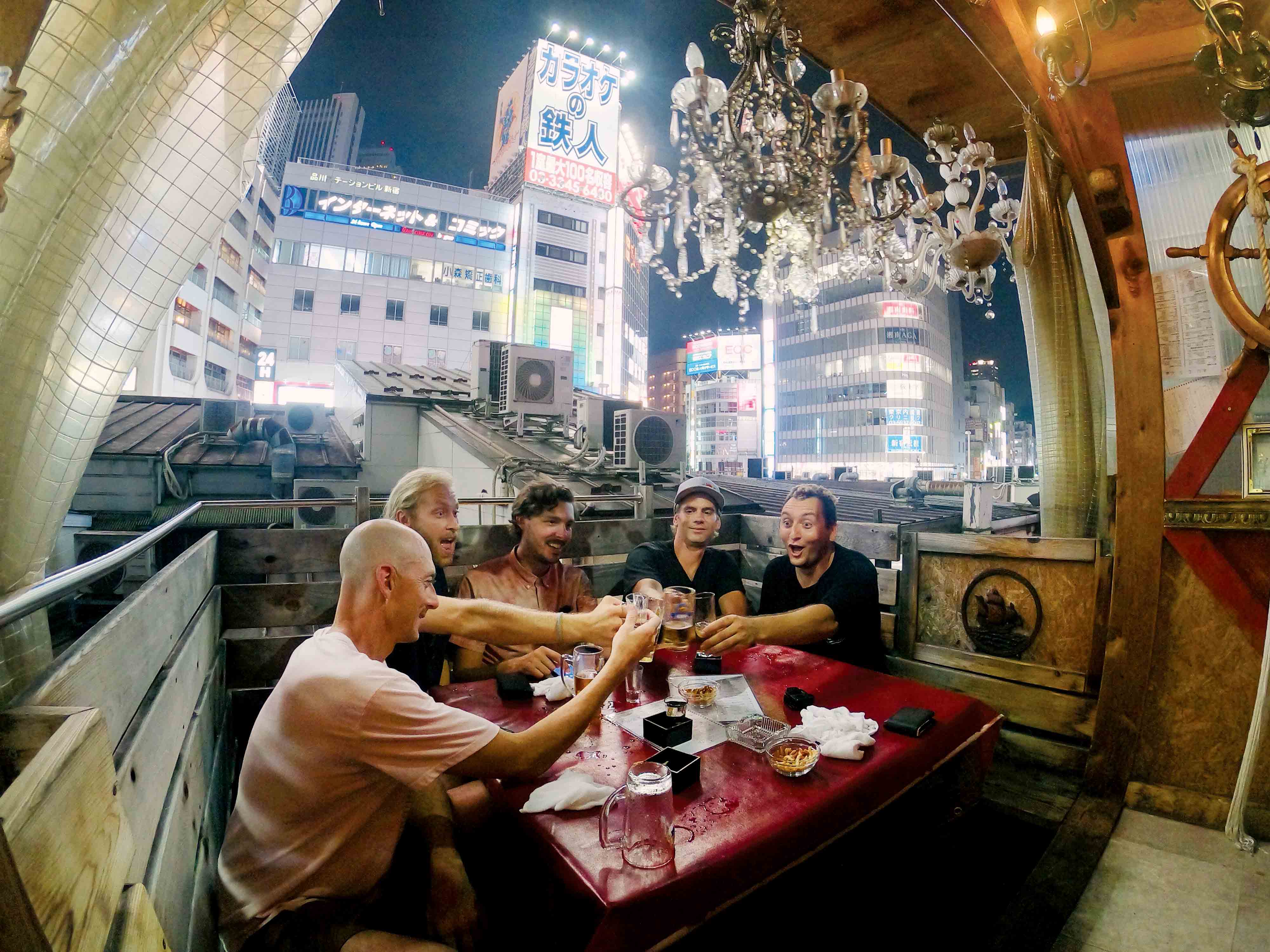 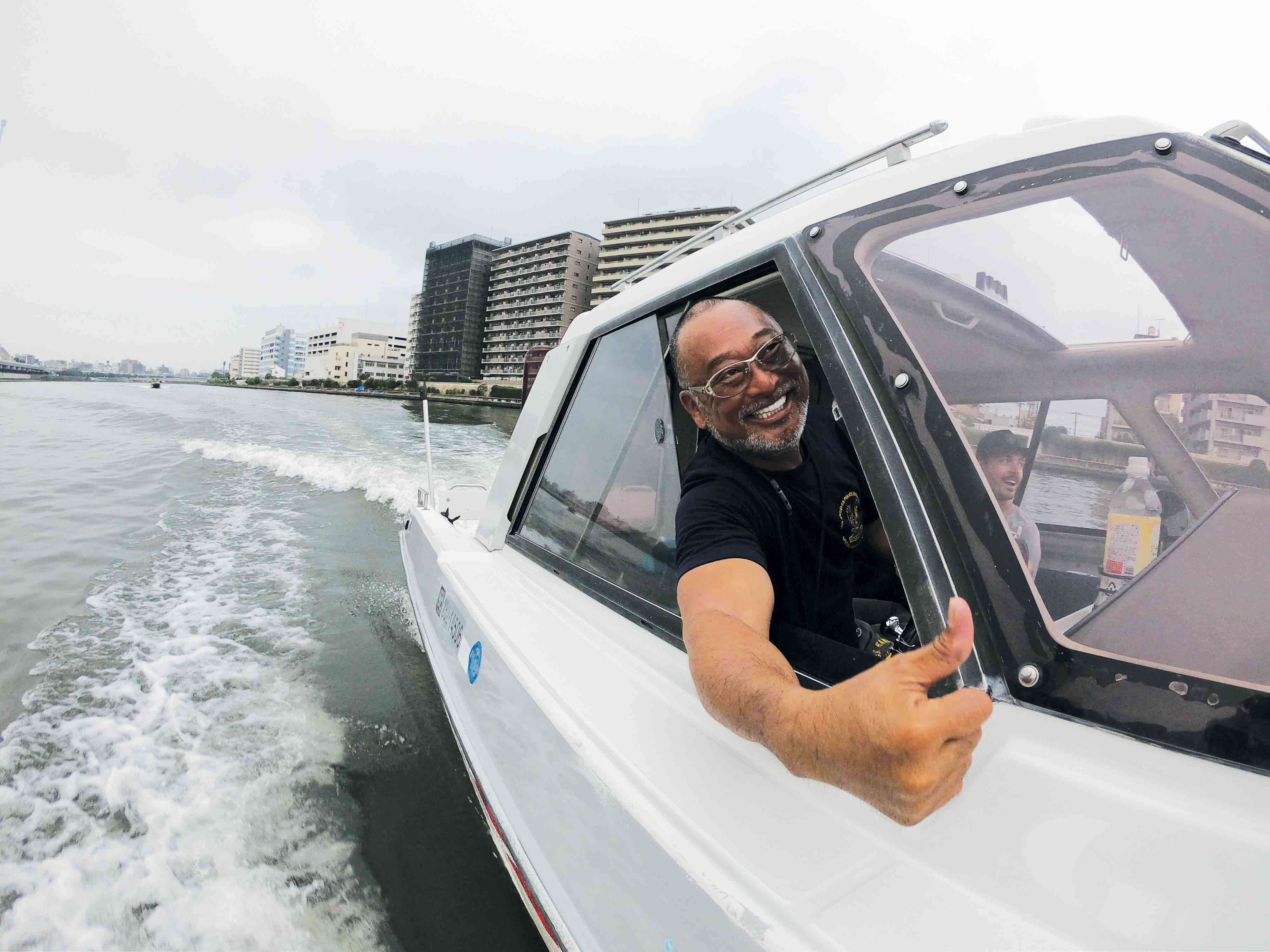 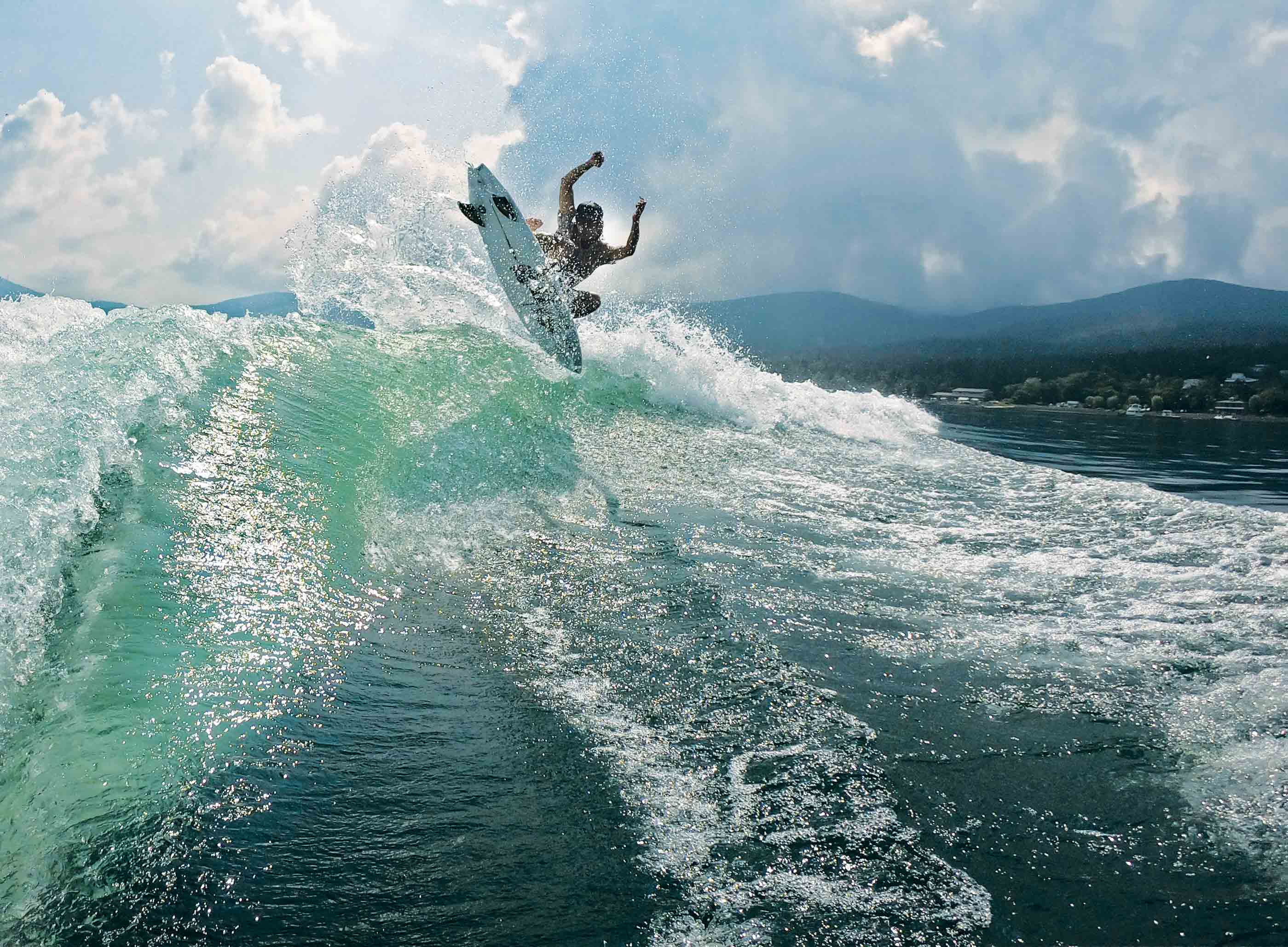 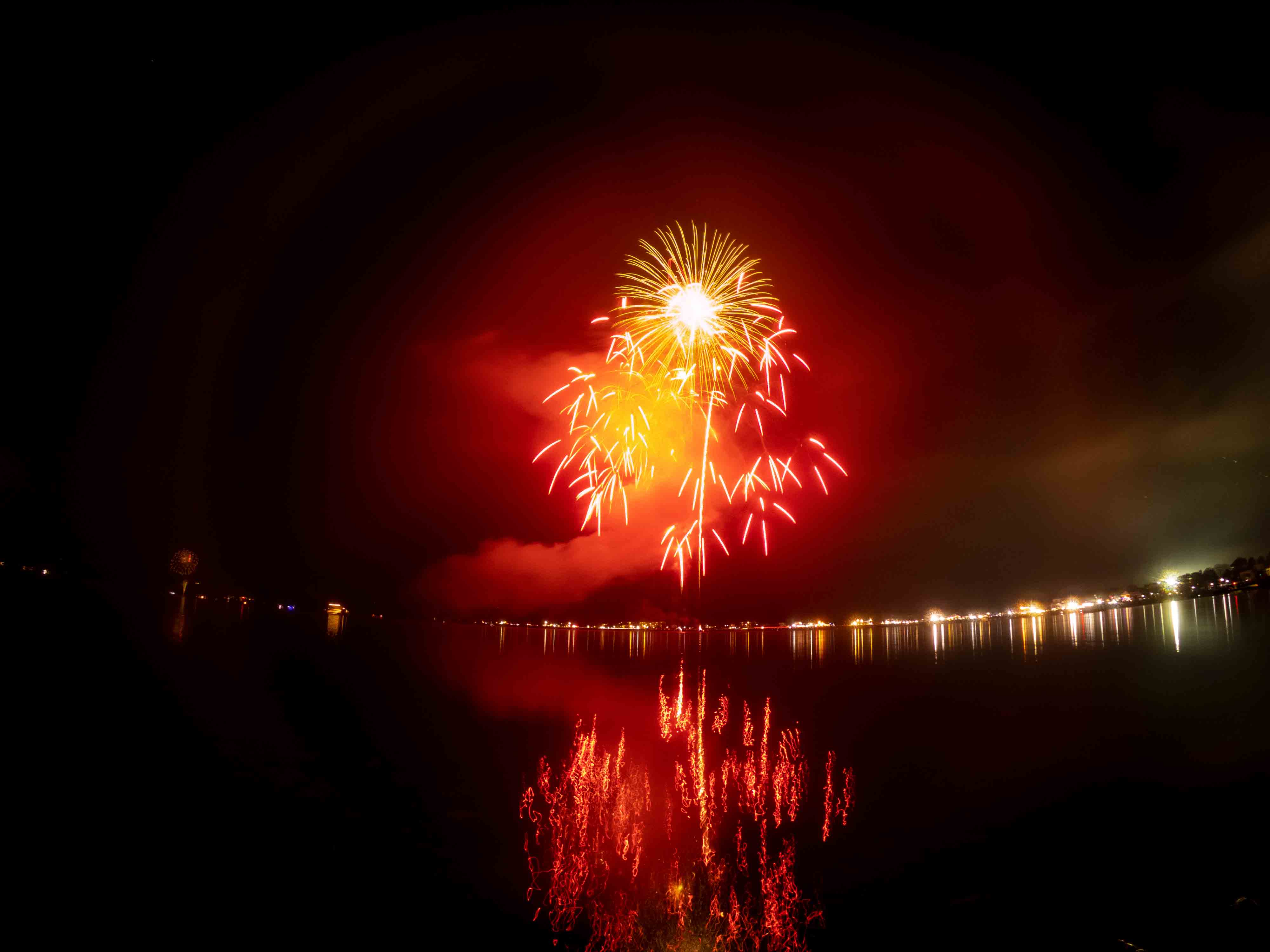