The Past week and a half in O-Town has been Poppin’ to say the least. I’ve been doing my best to get around the town and see what everyone has been up to and here is what I found…I sort of feel like a sl%t for wakeboarding but it’s all for the sake of keeping you  up to date on the newest hotness in the sunshine state. No no no, definitely wear the red bikini.

Watson’s – On my quest to Watson’s place I found myself in the midst of a video shoot with Australian filmmaker Josh Robinson. Josh is in town for the next month and a half living at Watson’s pad with Chris O’Shea and shooting on a daily basis for his follow up film to “Canvas” which was just released a couple of months ago. Joining us for the day was Collin Harrington who was amped to be home for a while and focusing on riding. Chris O hit some huge wrapped backside spins off the double up as well as a wrapped heel 7 straight to toe 9 off the wake. I’m guessing Watson’s MASSIVE wake had a little something to do with it because we were riding as if we’d been taking wakeboard steroids that day. Clear Lake – My next venture was a quick set with Ruck that ended up turning into an Australian wakeboard day with riders like Scotty Broom, Mitch Langfield, Sam Thompson, Dean Smith and a few other’s who’s name I could not understand because I don’t speak Australian. Haha! Just kidding. It all started when Ruck and I made our way over to Collin Harrington’s dock and noticed that the boat was gone, so Erik volunteered to “taxi” me out to the riding boat and sign me up for a riding time. It felt like we were at a country club signing up for a tee-time simply because there were about 8 guys all waiting to ride. Needless to say this “quick” set with Ruck turned into a photo shoot for the Australian wakeboard magazine. Shot-out to Sam Thompson who has some serious style behind the boat. Amber Wing. Boot out or bust out

Murray’s – The final leg of my Orlando wakeboarding tour took me to Shaun Murray’s Property to wakeboard with Keith Lyman who is temporarily keeping his boat on lake Narcoossee next door to Shaun’s pad. While I didn’t actually get to ride with Shaun himself I did get to sla him a high five as well as his daughter Haley. Joining us on the boat for the riding session were Aussie ladies Amber Wing and Haley Smith. We had great talk’s about the facebook and it’s effect on relationships and also got to see Amber’s minute long handstand. Don’t tell the girls but I managed to aqua-dook in the lake as the boat came around to pick me up without anyone noticing. You know what they say…practice makes perfect. Haha! Gross but totally awesome at the same time right!? 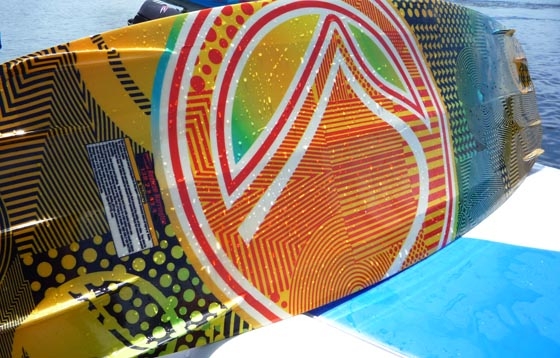