Inside Project X with Massi Piffaretti and Russell Spencer Massi Piffaretti and Russell Spencer during one of the final days of shooting at Lake Ronix. Photo: Hargrave

Project X was something Massi Piffaretti and Russell Spencer quietly worked on all season amid crazy travel schedules. You may have seen a few Instagram leaks over the past year but no footage of what exactly it was ever came out. During Surf Expo this year, the Alliance booth was buzzing with what was Project X. On Friday, during Premiers and Beers, in front of a packed booth Massi and Russell finally showed everyone what they had been up to. Everyone from the industry stopped and watched the funny speaking Italian kid prove just how creative he is. It’s been a month since anyone has seen it so I caught up with Massi and Russell before it officially drops Monday.

Bradlee: How did the project come about?

Russell: I met Massi (Piff Piff) at last years Less Than 5 Contest. The kid is freaking comedy, an absolute riot. After hanging with him at the contest and watching him ride, I asked him if he wanted to start a video project and he was all about it. Project X actually didn’t become something until months after I met Massi. Towards the end of last year, he signed with Malibu Boats and got Alliance Rookie Of The Year so I shot both those videos with him. He went home for the holidays and when he returned, we started Project X.
Massi: Well! i got introduced to Russell (young pretty nutzz) at the Alliance Less Then 5 contest last year, through Garrett Cortese. Alliance wanted me to film with him and work on making some video edits. Unfortunately I went back home to Italy shortly after so I wasn’t able to make anything happen. I saw Russell on all my friends snapchats and he looked like a funny dude so when I got back to the US I made sure we reconnected. We decided that we wanted to work on a project that was legit instead of a few web edits. So, we filmed throughout the year and that is how Project X was born.

B: How long did you guys film for?

R: We shot 17 sets over a 8 month period. It was tough with our schedules because he was traveling to all the contests and I was on some trips shooting for LF’N AWESOME and other contests. We took 1 day trip to St. John’s with Bradlee, Dowdy, and Robby. We shot everything else in Orlando due to our schedules.
M: We started filming in January but only using a gopro since Russell didn’t have his new camera so we had to get creative. 4 months later he finally got his camera in April which sucked because all of my contests started that month. My schedule became hectic and so did his. We had to film on the few off days we had together for the next few months. It was a struggle but well worth it in the end.

B: Was it cool watching the riding/filming progress throughout that 9 months?

R: It was crazy to watch his style and tricks progress so much in one year. There was this one morning earlier in the year when we were at Massi and Gunner’s hanging out. Massi was in the kitchen going through these motions of new tricks he wanted to try. He was just in the kitchen moving around like he was riding behind the boat and yelling out “And then I want to get this, and then I want to try this, and I want to get this tuck knee.” It was like he was in a trance, but I knew he had a solid vision of where he wanted to take his riding.
M: Working with Russell for 8 months was awesome. We started learning how to work together and every set things started to click. Russell is a rad filmer and it was cool to see our personalities mesh working on this project together. Russel is talented for sure.

B: What was the idea behind the video?

R: The video concept was simple, film him riding and doing his thing. He really wanted people to see how much fun he has while riding as well as focusing on style and creativity. For me, I just wanted to get all his tricks on a shot list and work with him on angles. Massi was involved with the edit process the entire time. We changed the timeline up numerous times, added tricks to the shot list, re shot different angles, he was incredibly helpful with insight. He saw every different chapter export and I wanted him to be more psyched on the final version than anyone else. Massi did all the hard work, I just pressed buttons.
M: To stoke people out. Honestly, we said that we just wanted to make it a legit hammer video. I only did tricks I love doing. It was all about having fun and showing that through the edit!

B: What was it like premiering it at surf expo in front of so many people?

R: It was both stressful and amazing. Out of all the action sports I’ve shot, this was the first year long edit I’ve ever done, so I was nervous that people wouldn’t be digging it. Having all of the industry there and to show them this project we’ve been working on the side for 9 months was awesome. All the boys were there supporting which was cool. We both just wanted everyone to be psyched on what they were watching. All the premiers this year were rad so I’m stoked for it to be among so many great riders and talented filmers.
M: It was stressful, every night I had nightmares that people weren’t going to like it. This was a project I put my heart into. I was nervous but at the same time excited to show all my boys!

Inside Project X with Massi Piffaretti and Russell Spencer 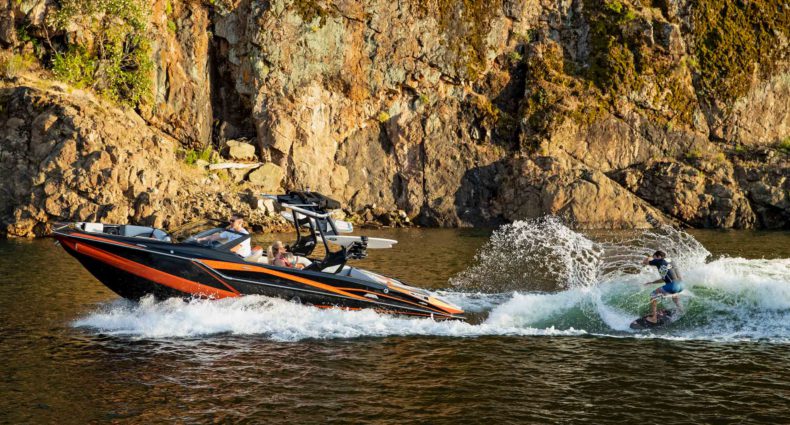