Getting Punted
by Derek Cook 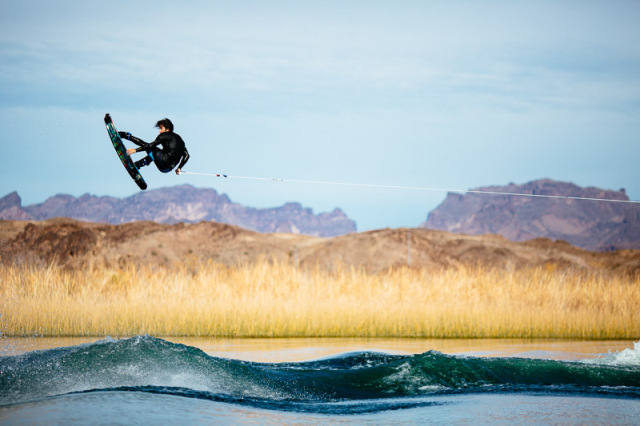 The author touching some sky in Parker, AZ   Photo: Cortese

Going big is always impressive and will always be a huge part of our sport. Whether it’s off the wake, kicker, down a winch gap, or a double up. Big is big, and it’s self explanatory when witnessed. Nothing has a wow factor quite like amplitude. Byerly and Gator were first seen launching off double ups in Spray back in the early days of the sport. At that time in wakeboarding history it was a total break through and everybody started signaling for left or right turns and trying to time the perfect takeoff. Double ups allowed riders to get enough hang time to take their tricks to new heights – pun intended. That additional time in the air gave riders the idea that way more was possible than what was currently being done. While tiny to look back at, those first double ups revolutionized the sport.

What is really cool about the double up is how unique it is to the sport of wakeboarding. Nowhere else is there the teamwork and artistry of a driver setting up a perfect section and a rider timing the collision of two forces in order to launch into the sky. As a rider, there is an extra cool feeling to taking tricks you know off the wake and landing them off a double up. It’s almost like learning a trick all over again. Plus, slowing down the rotations and holding grabs longer due to the simple fact that you have more time to do so is awesome. Double ups aren’t just fun for riders though. There is also a sense of pride and accomplishment for the driver. It’s so much fun to drive a good one for your buddy and have him stick the trick. Trust me, if you haven’t driven a double up for your friends before, start doing it now. 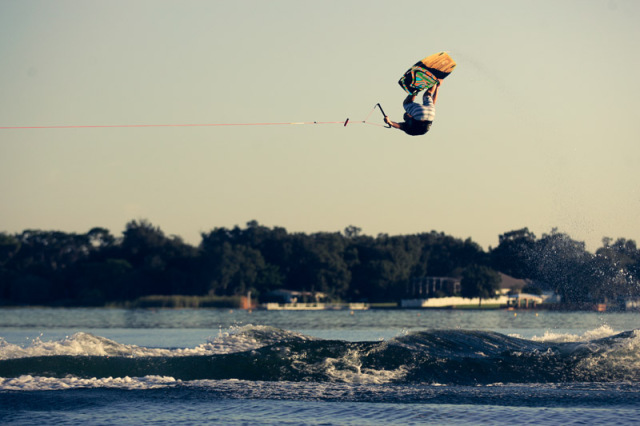 Bob Soven has been known to charge at some double ups from time to time…   Photo: Cortese

When I was getting into wakeboarding at the turn of the century, the pros I first saw weren’t just into double ups, they were advocates. I remember watching Rich Facciano roll right out of the gate into figure-eight double ups (left dub followed by a right dub) on the narrow sloughs on the Delta and not even hit a wake-to-wake jump. This was my first impression and it left a want and desire to always pursue double ups in my own riding.

Not to point fingers, but it seems to me that the double up is in a bit of a drought. In all the web videos and pictures of the next generation of riders these days it is rare to see double ups, and that has me concerned. I’ve heard guys say that their wake is so big now that it’s like hitting a double up every time – which is hard to argue because it’s pretty accurate. The arc on the hang time you get now behind new boat wakes is probably pretty close to what the early double ups felt like. The possibilities of what really can be done by this group of up and coming riders is unknown. But it still begs the question, if these new tricks are possible off the wake, then what’s possible off the double ups of these huge boats? And of course, why not go twice as high and keep pushing the wow factor that is inherently in wakeboarding’s DNA?

More than just a provider of progressive moves, double ups are a sort of art form. There is excitement in the boat when driving them and watching a rider charge into a big one. There is an art to driving them and hitting them just right. And the screams and cheers from the boat when a rider connects are unlike anything else in wakeboarding. I believe wakeboarding needs double ups now more than ever, and that the possibilities for progression are endless. With the size of the wake only continuing to get bigger as the sport evolves, the potential for what’s possible will continue to grow. More grabs, flips, and spins will be added (or subtracted), more air will be had, and more jaw-dropping yells will come from the boat. Just seeing what’s possible off the wake today, it’s scary to think about where our sport can go with the continued use of double ups. Go big or go home, right? 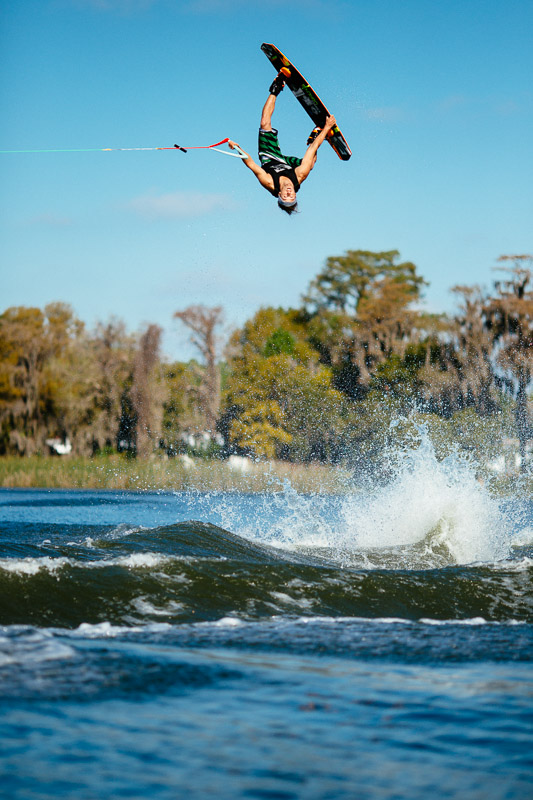 Jeff Langley, once again making a strong argument for the case of big air. We the jury find not hitting double ups guilty as charged!   Photo: Cortese