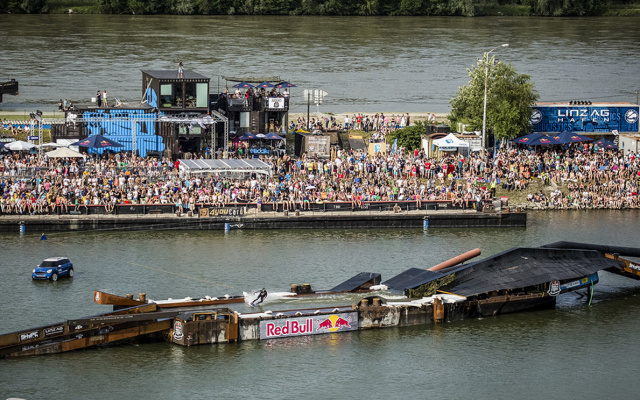 For the third consecutive time the international wakeboard elite comes together at the commercial port in Linz in June to battle it out in one of the most extraordinary events in wakeboarding. The Red Bull Wake of Steel has long since evolved into a real classic on the international wakeboarding calendar. On 14 June 2014 the city of steel will once again turn into a true wakeboarding hotspot, bringing together 16 of the best riders of the world. Local hero Dominik Hernler will try to defend his title against the best of the best.

The Red Bull Wake of Steel has long since turned into a real classic – for Austria as well as the worldwide wakeboarding scene. It is the event’s extraordinary obstacle – an old cargo ship – which makes the Red Bull Wake of steel unique. Year after year craftsmen of all sorts help maintain the old freighter to make it even more spectacular and versatile for spectators and riders alike. On 14 June the heat will be on again at the commercial port Linz turning it into a true hotspot for 16 of the best wakeboarders of the world – all of whom have been hand-picked to take part in this exclusive contest.

Leading this years pack is local hero and last year’s winner Dominik Hernler. In front of his home crowd he will do everything to defend his title. In preparation for this year’s event the young Carinthian has been training hard and spent most of his time in Orlando (USA). With its diverse wake parks and its highly competitive riders Orlando has provided Hernler with ideal training conditions.

But Hernler is not the only rider who will arrive in Linz fully prepared and ready to do damage. Daniel Grant from Thailand is no longer considered a child prodigy, but has evolved into one of the best riders ever on the cable. In 2013 Grant has taken home titles in all three disciplines of the WWA World Series. But Grant and Hernler are certainly not the only contenders taking part in the Red Bull Wake of Steel. Australian James Windsor will most likely also make an impact.

From an Austrian angle 16-year old Timo Kapl will be amongst the most interesting riders to watch. Hailing from Bad Leonfelden in Upper Austria Kapl has been among last year’s replacement riders for the event but did not start. In 2014 he will make his long awaited debut at the Red Bull Wake of Steel. With his technically refined tricks and great physical talent the 16-year-old might well prove his ground among the world’s wakeboarding elite.

Another highlight has benn provided by wakeboarding legend Parks Bonifay (USA) when he committed himself yet again as a judge for the event in Linz. Bonifay, who gave his judging debut last year, was highly impressed by the quality of the set-up as well as the riders, and has happily announced, that he will be back for the 2014 edition of the Red Bull Wake of Steel.

But the star of this year’s edition will once again be the obstacle itself. A cargo ship filled with water, prepared and groomed to meet the needs of the world’s best wakeboarders, the 65 metre freighter is an incomparable playground. Inside the freighter is a 150 square metre pool, a 28 metre long ramp, two kickers, a 20 metre pipe and 15 metres of iron poles for the riders to play around with. The highest jump takes the riders 4.5 metres above water level. A more levelled but longer climb at the front of the freighter makes for some extra action from the get-go. The mobile two-mast lift system gives the riders a vast range of options for countless tricks.

The Red Bull Wake of Steel will mark the highlight of the “LINZ AG Bubble Days”, which have turned Linz into a true hotspot for lifestyle and creativity – thanks to the consortium’s great commitment. Apart from a range of different shows various artists and bands will enthuse the crowd. A special highlight awaits Friday when the FM4 Urban Beach gets going alongside the Red Bull Wake of Steel Stage, which will be rocked by DJ Phekt, Chris P Cuts, Martin Jondo and Salzburg’s Indie-Rockband Streaming Sattelites. Saturday will be all about the Red Bull Wake of Steel. The programme starts at 2:00 pm with the qualification rounds. After the final the event will be capped off by live performances from Hinterland, FIVA MC and R.A. The Rugged Man, just to name a few.