The Liquid Playground’s Double Down Exhibit 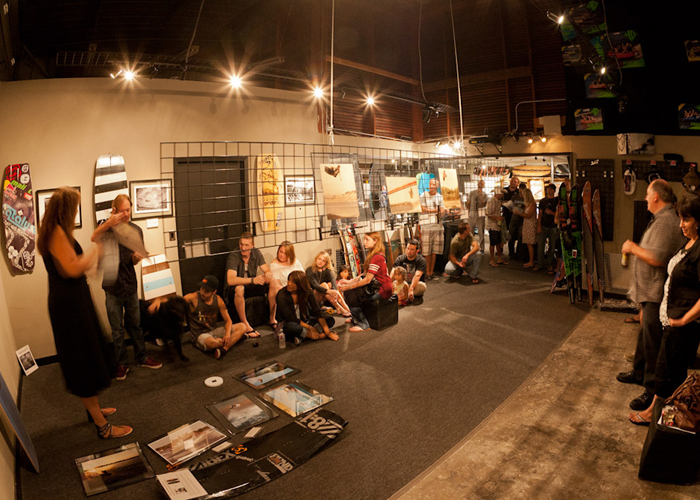 In his quest to bring awareness to the ‘artsy’ side of wake Austin Watts, owner of The Liquid Playground in San Jose, CA, brings together wake, charity and good will to the community. On July  15th, 2011 The Liquid Playground opened their doors to customers, riders, and art lovers alike to enjoy the second art gallery event “Double Down” which featured  top photographers who shot breath taking, massive Double-Up shots of today’s top pro riders. Photographers included Garrett Cortese, Joey Meddock,  Riley Bangerter and Matt Malloy. Matt Malloy came through big for the event by framing awe-inspiring canvas prints of the Byerly team in action – a big hit for the wakeskate crowd. Spencer Smith graced The LP with his attendance – flying in from Florida to be part of the event and showing some of the most epic photographs to date. Local photographers also in attendance were Arun Frances and Scott Alexander who chatted with the attendees about their shots and time on the water.

As attendees meandered through the 800 square foot exhibit space created to share owner Austin Watt’s love of the sport, they were munching on cookies made by Austin’s mom and drinking their classy adult beverages. Most couldn’t help but pause at a photo shot by Joey Meddock of Parks Bonifay hitting a massive double-up, riding the 2011 Ronix Ibex; especially since the bright orange and black one-of-a-kind wakeboard was on display right below the shot. To support the cause close to The LP’s heart the fundraiser of the evening supported the Bryan Stow Foundation.

Whether or not you are a San Francisco Giants fan, you have likely heard about the tragic incident involving paramedic Bryan Stow following a SF Giants VS LA Dodgers game. Bryan, who remains still in critical condition from the trauma after suffering a severe skull fracture following the season opener on March 31st, is a friend to many of The Liquid Playgrounds customers and a diehard Giants Fan just like owner Austin Watts. After a conversation with a good friend of Bryan’s, Austin placed a call to Ronix who graciously donated the Ibex to be displayed as the main raffle prize of the evening to honor the foundation. In addition to the board, Spencer Smith, who was feeling the love in the room couldn’t help but support this awesome community he was becoming a part of so he donated each of his prints on display to the raffle allowing a majority of the attendees to go home with not only a good buzz but also a warm place in their heart for donating, and some killer images in their hands.

After all the tallying for the evening was done, The Liquid Playground collected over $600 for the foundation confirming that The LP’s customers’ are the best in the west. Keep an ear out for the next Liquid Playground Art Gallery exhibit featuring Garrett Cortese, Editor-at-large of Alliance Wakeboard Magazine, which is scheduled to take place on August 25th.

Austin looks forward to sharing his love for wake, community and charity with all those who share his passion. Please visit www.theliquidplayground.com for more information and keep an eye on the LP’s Facebook page for more event details: www.facebook.com/theliquidplayground.  Love Life.

The Liquid Playground’s Double Down Exhibit