Editor’s Note: This article appeared in the June issue of Alliance. It is written by Justin Caskey, who is an avid wakeboarder with an incredible story. After seeing his documentary style video we asked him to write an article for the magazine about his ordeal and his view of the sport now. Read on and check out the video, it is more than worth your time. 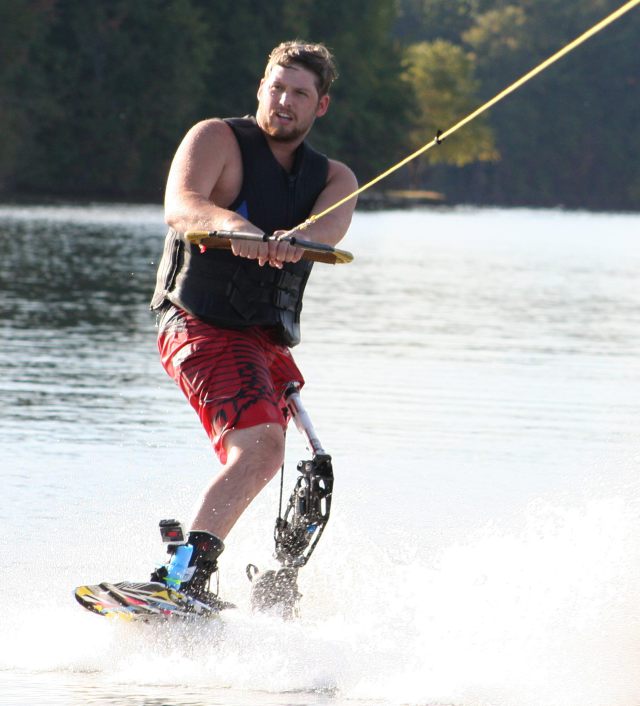 I’d like to start this off by asking you a question. What if you were told you would never be able to wakeboard again? Seems crazy, right? Well, that was my story when I was 14; when I battled cancer and subsequently had to have my leg amputated. So when I was asked why does wakeboarding matter to me it was difficult to answer because in a lot of ways, wakeboarding played a large role in getting me through the fight. I couldn’t imagine not wakeboarding again, so it became my motivation to get better and stay positive – even after I lost my leg. So to answer that question right now, I think wakeboarding means motivation and inspiration.

Ever since my neighbor first introduced me to wakeboarding at Lake Anna, VA when I was 7 years old I have never stopped trying to test my limits with it. I have also always been a bit of a show off, so I meshed well with wakeboarding and always having people watching in the boat. I was officially hooked after I landed my first tantrum when I was 12. The next summer I had just gotten my first Liquid Force board and bindings and I couldn’t wait to break them in, but fate had a different plan. Right after I turned 14 I was playing a pickup football game with friends and when I was tackled my left femur broke in half. For the first time in a long time, wakeboarding was not the first thing on my mind.

Doctors soon found out the reason for my broken femur: a bone tumor. The doctors told me and my family that it was cancerous, and needed to be taken care of. I had to undergo chemotherapy and several surgeries to replace my hip, femur, and knee with titanium implants. There were complications during surgery, and a long 13-week hospital recovery where family and friends hung enlarged wakeboarding and lake pictures on the hospital walls to give me a positive focus. Over two years went by and I just wasn’t recovering all the way with my implants. It was in October of my senior year I was told that I had a recurring tumor in my left hip. The only course of treatment was to amputate my leg at the hip and go through more chemotherapy.

I took the news hard at first. I guess that’s to be expected though right after you hear you’re about to lose your entire left leg. The whole time that I was trying to recover from the first surgeries I was always looking forward to getting back on my wakeboard. I had kept the untouched Liquid Force setup that my parents had given me in my room to inspire me. I wouldn’t let anyone else use it because I still wanted to be the first one to take it on its “virgin ride.”  The new diagnosis made it seem like that was never going to happen though. I asked about prosthetics, but my doctors and physical therapists told me that prosthetics just hadn’t been made to accommodate amputations as high up as mine for water sports. Even still, I never let anybody ride my board.

The silver lining was that the amputation surgery went really well. I was actually more positive about my outlook after the surgery than I was before. I think that it is definitely in large part due to my friends and family. I spent a lot of time over that first summer at the lake, even though I couldn’t ride. When I did go out on the boat it was to either go tubing or teach friends how to wakeboard. But I couldn’t take it for very long, I had to figure out a way to ride that new board that was still waiting for me. I decided since there was no device that I could use to wakeboard for my situation, I would just have to make my own. My friends and family were there for me again, and after several prototypes we finally came up with something that was sturdy yet light enough for me to ride with. It was essentially a cane for wakeboarding. It worked really well for getting me back out on the water, and I could even go wake-to-wake with it. As usual though, I wanted to push the limits as far as possible. After some research, and some very important fundraising through my sponsor company Nectar Sunglasses, we were able to get enough money together to buy a prosthetic sports knee that my friend Chris Harris and I had found online. We took it to my prosthetic guru Joe Sullivan of Powell Prosthetics, and with his help we put together the first wakeboarding prosthetic for hemipelvectomy patients (hip-high amputation).

So after breaking my femur at age 14 and discovering I had cancer on two different occasions, it has only taken me ten years to get to where I am today – back on my wakeboard and loving it. The main thing that I have learned from this experience is that goals are different than plans. No matter how much our plans change along the way our goals can still be accomplished if we have the determination. My goal was never to be the best wakeboarder ever – it was to never quit trying to be better than I was the day before. No matter what. I strive for that goal every day, and I’m happy to say breaking in an old new wakeboard never felt better.