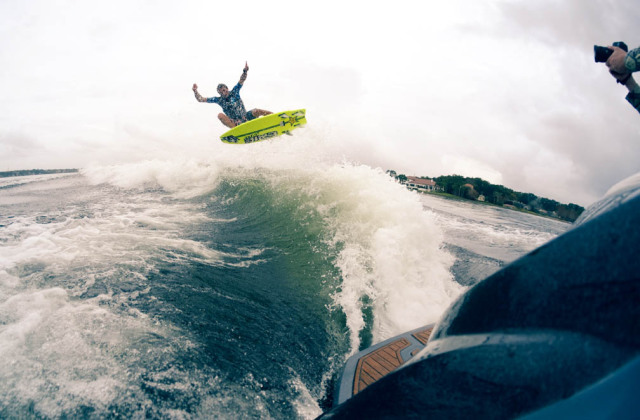 O’Neill has been synonymous with water sports since its inception, but as with a lot of the brands involved in boating and surfing, the two didn’t always mesh. Wakesurfing has changed that. In a big way. Thanks to the development and progression of boats and the wakes they produce, surfers and wakeboarders, wakeskaters, and wakesurfers can all get together for some quality hangout time. On a lake, without any ocean or swell in site. Lucky for us O’Neill happens to sponsor two legends in their own sports who both call central Florida home: Scott Byerly and Cory Lopez.

This January the O’Neill wake team gathered in Orlando to work on 2015 catalog and marketing materials. Some of this meant a couple days wakesurfing at Byerly’s place with Cory. The weather wasn’t ideal, but the vibes were awesome. Everybody had fun messing around and trying different things – including doing tow-ats into the G21’s wakesurf wake. Tow-ats are something surfers commonly do with PWCs in the ocean when the swell isn’t very big. The extra speed allows them to do more, different things.

The coolest part about having everybody hang out was just the diversity of the crew that was being brought together in one boat at the same time. On one hand you had the host and wakeboarding and wakeskating godfather and legend of Scott Byerly, while on the other hand you had one of the most renowned surfers of his era known for both is aerial maneuvers and insane tube-riding skills. In the mix you had Collin Harrington, a waterman in every sense of the word who also happens to charge on a surfboard; Aaron Reed and George Daniels, two of the best wakeskaters in the world; and a couple of the guys from the marketing department of O’Neill based out of Santa Cruz, CA. All of them have different connections to and views of surfing and boating as both competitive sports and lifestyles, but they were all brought together in one boat to enjoy a couple days of work/fun.

The week of shooting and hanging out was capped off in a way only possible in Florida; with a visit to a couple of the natural springs in the Ocala National Forest. Florida’s springs are crystal clear and stay at a constant 72-degrees year round. We visited a couple using Scott’s boat and had a blast swimming around in water that was warmer than the air and chasing giant tilapia, mullet, and whatever else was in site.