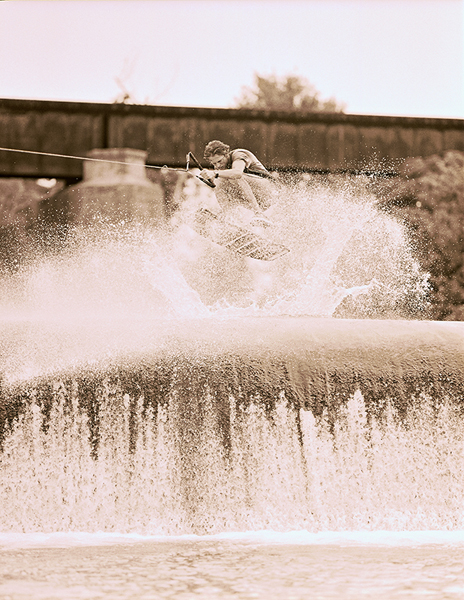 The rumors of Grant Roberts first started circulating thanks to Nor-Cal-based photographer  Rodrigo Donoso. “There’s this kid I shoot with, he rides like George,” Rod would tell people.  While anyone will admit, those are some big shoes to fill, when Grant showed up at the Toe Jam a couple years back, it was quickly apparent, this kid’s got it. Grant is a solid rider who pops big and clean in true Nor Cal style, and can hold his own behind just about anything. It hasn’t taken him long to make a mark on the wakeskate world, and now as a member of the Obscura team, he is ready to truly break out. And yes Grant, that’s what she said.

AWS: How did you get into wakeskating?

Grant: I started wakeskating when I realized I was a horrible wakeboarder, haha. Nah I got a skate before a family trip to shasta and started riding that and never went back to the straps.

Grant: Umm, it’s getting there. It used to have a pretty cool wake scene, then some of the wrong people started trying to run things out there. But the wakeskate scene has blown up in the last few years. At the first Norcal Convergence wakeskate event there was like ten people now were up to 60 or 70 I think.

AWS: Is it hard to live in Cali and be a pro wakeskater?

Grant: It’s not bad. I got one of my best friends, Rodrigo, who is also an amazing photographer living out there so that helps out a lot. I also got some good buds who are always down to film and build rails whenever. They’re awesome.

AWS: You tried out Orlando last summer, why did you end up moving back?

Grant: Orlando was cool and I think at some point I’ll do the move again for a few months or so, but I just felt like there was nothing to do out there if you weren’t wakeskating. I ate an insane amount of food when I lived there though that’s for sure. California is just to perfect when it’s warm.

Grant: Riding for Obscura is like a dream come true. Having guys like Danny Hampson and Aaron Reed behind you telling you to stick a trick is pretty motivating. They have been taking really good care of me too, it’s been awesome.

AWS: What’s the best advice Aaron Reed has given you?

Grant: Be a sponge Grant. Soak up everything you can learn. He’s gonna be so stoked I remembered that.

AWS: What is your most challenging responsibility as a member of the Obscura team?

Grant: I can’t say its too challenging. Helping Aaron in the kitchen and holding my appetite at winch spots can be pretty difficult though.

AWS: I read on the blogs you got to go to Australia. How did that come about?

Grant: That was actually really random. I woke up one morning with an email saying trip to Australia for a wakeskater sent to the whole team and pretty much first one to respond goes. Danny was hurt and was nice enough to let me go even though he responded back first. Then next thing I know I’m on a flight to Australia the next week. So insane I couldn’t believe it was happening ’til I was on the plane.

AWS: What was Australia like? Heard you may have met the love of your life, any truth?

Grant: Australia was awesome. Those dudes out there are so rad. Always down to go ride and do whatever, pretty much. They took me to go see kangaroos and some aussie food. Riding out there was awesome, they had a sick cable park, Sunshine Cable Sports, that was stocked full of rails. They also had a couple cool rivers I got taken out to ride. And yeah love of my life for sure, haha. She was way cooler than I was so I was pretty stoked we hung out a bit out there.

AWS: Any plans to go back?

Grant: I’m actually planning on going back for a couple months end of October. Hang out with Kallas down there and do some cable riding. And the love of my life of course.

AWS: Anywhere else you’d like to go but haven’t been yet?

Grant: I would really like to go to New Zealand or the Phillipines. I just remember watching those events Red Bull put on down in NZ and the scenery looked so badass down there.

AWS: How was your trip to the Daily Habit? Did they know what wakeskating was?

Grant: Haha, yeah they knew what it was and they were stoked on it. The surfers were all about it too, so it was cool seeing them respect it. But it went good, I had been awake for like 32 hours so I was just super out of it and didn’t seem to awkward for once.

AWS: I often hear you compared to George Daniels. Is that hard to live up to?

Grant: I’ve heard that a couple times, but George is George. He did so much for the sport and is still pushing it, so I can’t put myself in the same category as him. I looked up to him a lot coming up.

AWS: You definitely seem to like big spins? Why is that, a throw back to Danny Hampson?

Grant: The bigspin is Danny’s. Like he said, that trick is going on his tombstone and he can do them whatever way he wants. I just do them cause I will fall on other stuff haha.

AWs: What’s one thing about being a pro wakeskater you don’t think people realize? Care to crush any dreams?

Grant: It doesn’t get you girls. Pick up straps for that.

AWS: If you could trade skill sets with any person in the world, who would it be and why?

Grant: Probably Dane Reynolds. He shreds on a surfboard and that’s seriously something I would love to be able to.

AWS: What about in wakeskating? Who do you most look up to?

Grant: I got 4 people I really look up to. I started out by looking up to Danny and Aaron, and then the new guys like Nick Taylor and Andy Pastura I look up to a lot.

AWS: How often do you ride? Is it hard to keep it up?

Grant: That’s what she said hahahaha. In Orlando I was riding a lot but I feel like since i’ve been home it’s been slowing down a lot. Hopefully 4-5 times a week, sometimes more, sometimes less. It definitely gets hard to keep it when it starts cooling off and you’re just trying to get the stoke to get out from the blankets drive an hour and do the whole wetsuit cold thing.

AWS: What do you like to do besides wakeskating?

Grant: I definitely like to surf quite a bit. Not very good at it, but I would like to think one day I might be alright, haha. Eating and sleeping are great as well.

AWS: Tell me one thing about yourself you think no one knows.

Grant: I didn’t start growing chest hair till this year. Pretty stoked on that and I don’t tell many people.

AWS: What do you want to be when you grow up?

Grant: My Mom for sure as well as my Dad. My best friends Ben, Chet, Rodrigo and Nicky T. Aaron and Danny and all the guys at Liquid Force/Obscura. Prefontaine and Moody at O’neill, Straightline and DVS. My brother and sister, and anybody else who has helped me out.