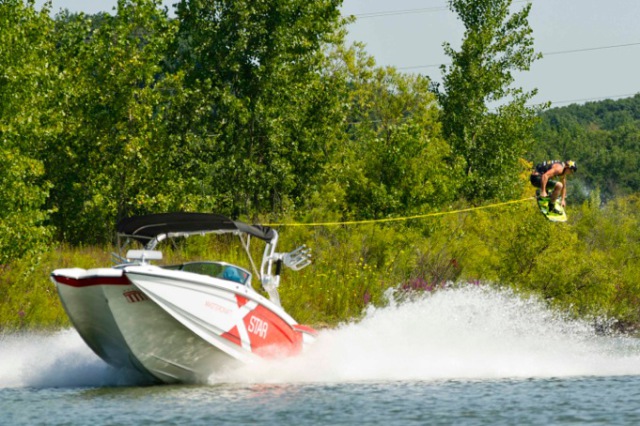 Grand Rapids, Mich. ― Thousands of fans lined the shores of Millennium Park to witness the final stop of the 2014 MasterCraft Pro Wakeboard Tour, presented by Rockstar Energy. Boardshorts, bikinis and excellent wakeboarding conditions were on-point during one of the most astonishing finals to date. The best wakeboarders on the planet went to combat against each other; Harley Clifford (AUS), Phil Soven (USA), Shota Tezuka (JPN) and Massi Piffaretti (ITA) absolutely threw down behind the MasterCraft X-Star. The CONTOUR Big Air Kicker Contest took to the skies as well, with Dean Smith (AUS), Aaron Rathy (CDN), Noah Flegel (USA) and Chad Sharpe (CDN) launching themselves off of the CONTOUR Kicker.

After round one of the finals, the placements stood: 1st-Harley Clifford (AUS), 2nd-Josh Twelker (USA) and 3rd-Phil Soven (USA); however, with Rusty Malinoski (CDN), Shota Tezuka (JPN) and Massi Piffaretti (ITA) hungry for a podium spot, everyone knew it could be anyone’s time to shine. Soven would be first off the dock and he decided to put down two incredible passes that included some of his signature tricks such as switch nose-grabbed crow mobe 540 and nose-grabbed moby dick 540 finished with a wrapped nose-grabbed backside rodeo 540. Tezuka would show the crowd he could hold his own as well, stomping a heelside frontside 900 followed by an almost flawless two passes. In the end, the riders could not match the insanity created by Clifford and would fall just short. Leaving the nose-grabbed mobe 540, tail-grabbed KGB and melon toeside frontside 900 spinning Harley Clifford as your 2014 MasterCraft Pro Wakeboard Tour – Grand Rapids champion and the 2014 MasterCraft Pro Wakeboard Tour Overall Champion!

“I couldn’t be more pumped with my results today!” says Champion Harley Clifford. “It was one of the coolest finals of the year and it was so close between everyone. No one knew which way it would go.”

The CONTOUR Big Air Kicker contest got the day ramped up! With towboat driver #1 Travis Moye hammering the X-Star throttle down, the riders sent it as high and far as humanly possible. Rockstar rider Aaron Rathy (CDN) set the bar with a huge stalefish backside 360. However, fellow Rockstar teammate, Dean Smith (AUS) would not be outdone, ripping into the kicker with certainty he was going to land a backside 720 just as large as Rathy’s 360. After it was said and done, it was Dean Smith to take the win, followed by Aaron Rathy, and Chad Sharpe.

“I was thrilled to be able to hit my backside 7 first go today,” explains CONTOUR Big Air Kicker Champ Dean Smith. “I had fallen on it at the previous King of Wake stop, so it was nice to have it back under my belt.”

Make sure to stay tuned to KingOfWake.com for more awesome highlight media and don’t forget to set your TV sets to NBC Sports on October 12 at 4:30 p.m. EST to catch the whole event.

MasterCraft is the exclusive towboat for the Pro Wakeboard Tour, as it has been since the tour’s wakeboarding events began in 1992. For more information, visit MasterCraft.com.

Rockstar Energy Drink is designed for those who lead active lifestyles ― from athletes to Rockstars. Available in over 20 flavors at convenience and grocery outlets in over 30 countries, Rockstar supports the Rockstar lifestyle across the globe through action sports, motor sports and live music. For more information, visit RockstarEnergy.com.

The King of Wake is the world’s elite pro wakeboarding series, attracting the sport’s top athletes from throughout the globe. Over the course of a season, athletes compete for the ultimate wakeboarding crown in a series points race of eight events throughout the United States to see who rules the wake. The King of Wake is organized by World Sports & Marketing ― the leading wake-events producer since 1988.