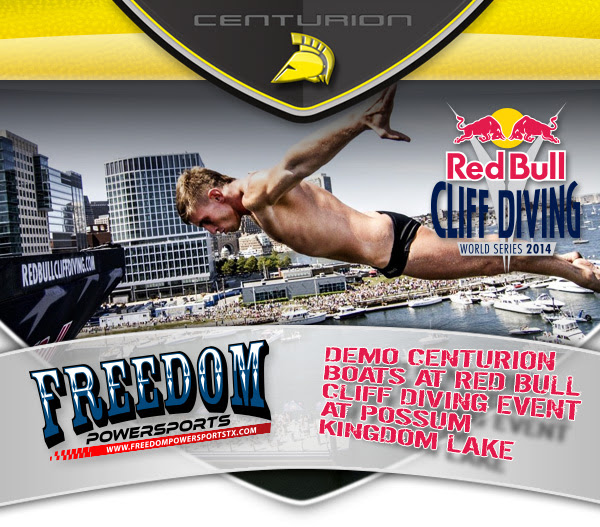 Merced, CA June 4th, 2014; Centurion’s Forth Worth, Texas dealer, Freedom Powersports, will set up a boat display and support the 2014 Red Bull Cliff Diving World Series on June 7 at Possum Kingdom lake in the heart of Texas. Attendees are encouraged to take a free boat demo test ride in one of the new 2014 Centurion Enzo’s.

The Red Bull Cliff Diving Series is seven-city tour that started last week in Havana, Cuba. The series goes through Texas this weekend and will end in Rio de Janiero on October 19, 2014. The Ft. Worth stop is the only U.S. city on the tour. Other cities include Bilboa, Spain and Kragero, Norway among others.

The kick-off competition in Havana, Cuba saw no fewer than five new dives – among them a never-before-seen feat by the brilliant Brit Gary Hunt, a new face on top of the podium who increased in the average degree of difficulty significantly. As the season has only just started and the divers used Stop 1 in order to find their rhythm and comfort after the long off-season, a lot can be expected from those who did not make it onto the first podium.

Centurion VP of marketing, Todd Gaughan said, “We are so excited that Freedom Powersports is branching out from traditional events in an attempt to drive new customers to the sport of boating. Our industry needs more creative out of the box thinking like this and we salute them for making this happen.”

Cliff divers leap aesthetically from almost three times the Olympic height and hit the water at speeds of 85kph, protected only by their concentration, skill and physical control. Since 2009, the Red Bull Cliff Diving World Series has featured the biggest talents, the most promising newcomers, and since 2013 has also provided a platform for women. Seven tough competitions for the men, three challenges for the women – in its sixth season this jaw-dropping sport will hit new as well as proven ground in the Caribbean, the continents of North and South America and Europe between May and October to determine a new champion for both men and women.