The First of the Nautique Wake Open Champions Crowned 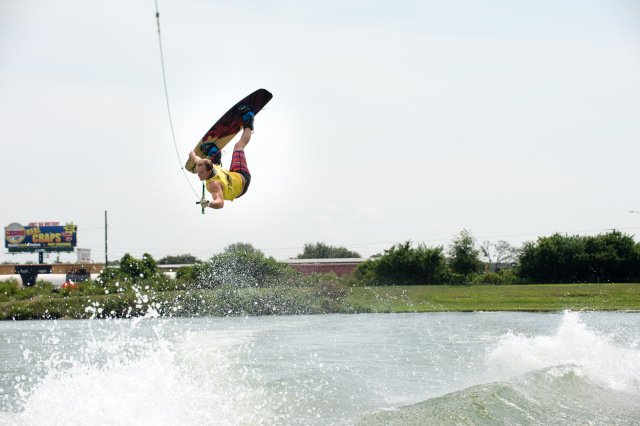 Finals in 14 Divisions go down under perfect conditions at Orlando Watersports Complex!

The prestigious event, running through the weekend, features a large contingent of the best professional men and women wakeboarders and wakeskaters, as well as many of the world’s top amateur riders competing across 24 total divisions.

One of the day’s only perfect scores was awarded early this morning to South Florida’s own Michael Fay in the amateur wakeskate division. “Michael rode so well today that a perfect 100 was the only score we could consider awarding him, he was flawless!” said Rob Corum, the event’s Chief Judge.

During the Boys division, it was an Australian takeover with Elliot Digney and Sam Brown stealing the show. Elliot stood up both passes and snagged first place landing a tantrum to blind and a handle pass KGB. Sam Brown got second landing a whirly bird and a backside 540 at the end of his second pass.

The Junior Girls division was one of the highlights of the day, with the Final round giving Kyla Hendricks her chance to show the crowds exactly what she could do with two passes behind the G21. She killed it, riding super smooth, going big and grabbing a bunch of her tricks and landing several inverts.

Today also marked the first round of the Junior Pro Men’s division, a fan favorite. These up-and-coming rippers took to the water behind the perfect wakes of the Super Air Nautique G23 and put down runs that would compete with any of the pro riders these days.

During the fourth heat of the Junior Pro Men’s, it would be Cory Teunissen as the only other rider to earn a perfect score today aside from Michael Fay. Cory will advance into the next round of his division where he will face a crew of hungry Junior Pros ready to do what it takes to make it into the Finals. Stay tuned all weekend long as the Junior Pro men narrow down the field until their Final round taking place on Sunday!

The weekend will be action packed with live music flooding the speakers around the Orlando Watersports Complex from Davis McGee on Saturday from 12 p.m. – 4 p.m., and the funk, rhythm and soul tunes of Soul Taxi on Sunday, from 12 p.m. – 4 p.m. Beat the heat in the new chill zone. In addition, fans can stay for the one-of-a-kind CONTOUR Big Air Contest on Sunday.

The Nautique Wake Open is stop number seven on the 2014 King of Wake Series and serves as the final stop on the Nautique Wake Series, a four-event professional and amateur wakeboard and wakeskate series. A season ending banquet, honoring the series’ top performers, will be held on Saturday, Aug. 23 at the Downtown Orlando Embassy Suites located at 191 E. Pine St., Orlando, Fl. 32801.

About Nautique Boat Company, Inc.
Celebrating 89 years of excellence in the marine industry, Nautique Boats is known for delivering the highest quality product, innovative technology and exceptional customer service experiences. To get more information on the company or see the complete line of Nautique boats, visit www.nautique.com.

About Rockstar:
Rockstar Energy Drink is designed for those who lead active lifestyles – from Athletes to Rockstars. Available in over 20 flavors at convenience and grocery outlets in over 30 countries, Rockstar supports the Rockstar lifestyle across the globe through Action Sports, Motor Sports, and Live Music. For more information visit: www.RockstarEnergy.com

The First of the Nautique Wake Open Champions Crowned