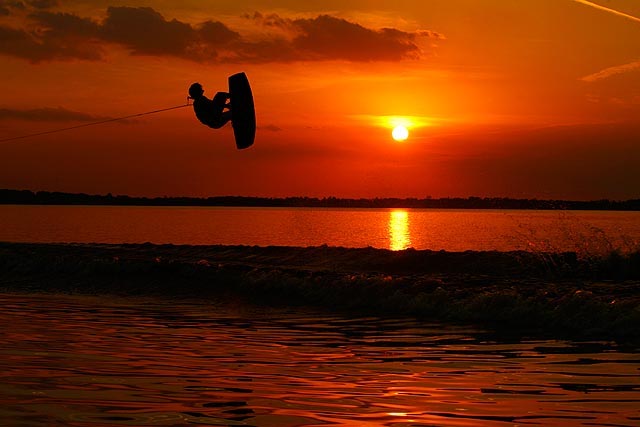 Memory of riding: I remember landing my first invert. It was a tantrum and I was so happy after I landed it I whipped into the dock too fast and rammed the dock resulting in a broken board. That was 1996.

Wakeboard: HO Big Gun. It was a directional board given to me by Shaun Murray. I only rode it for a couple weeks though cause twin tips were already everywhere. My first twin tip was a Neptune.

Sponsor: Hyperlite. Paul O’brien hooked me up after he watched me ride in one of the boys Vans Triple Crown events.

Car: I took my driver’s test in my parents 15 passenger WWC van. First car I bought was a Mitsubishi Montero sport.

Trip to the emergency room: I almost died when I was 1. Some girl at a baby shower gave me some keys to play with and I sprayed her can of mace into my mouth. But the first one I can remember was I cut my foot on broken glass getting into a sweet “hide and seek” hiding spot. Got around 20 stitches.

CD: Nirvana. Smells like teen spirit. My Dad threw it away when he saw the naked baby.

Contest win: I am not sure which city it was in but it was one of the X-Cups that Sean Dishman used to run.

Roommate in Orlando: Aaron Rathy moved into my house I built in Groveland. We had some good times in that house.

Cablepark you ever rode: Ski Rixen in Ft Lauderdale. It was a couple years before rails and kickers were added to cable riding. I just remember getting smoked trying raleys and tweety birds.

Girlfriend: My first real girlfriend was my wife; we dated for a couple months in 8th grade. Then got back together in 10th grade…been together ever since.

Autograph you signed: Hyperlite team poster signing. I was 13 and pretty stoked to be signing with Murray, the Heaney brothers, Andy Laz, and Dean Levelle.

Time you fought Andrew Adkison: The first trip we ever went on as teammates at CWB was to New Zealand. We were out at the lake all day building a rail for the event and no one told us about the intense sun down there. We both got real sunburned but his was way worse then mine. I thought it would be funny to slap him with a long piece of sawgrass and he didn’t think it was very funny. That was the first time I ever saw the devil in Andrew’s eyes haha. He chased me down and body slammed me to the ground. I thought he was going to kill me. Good times!