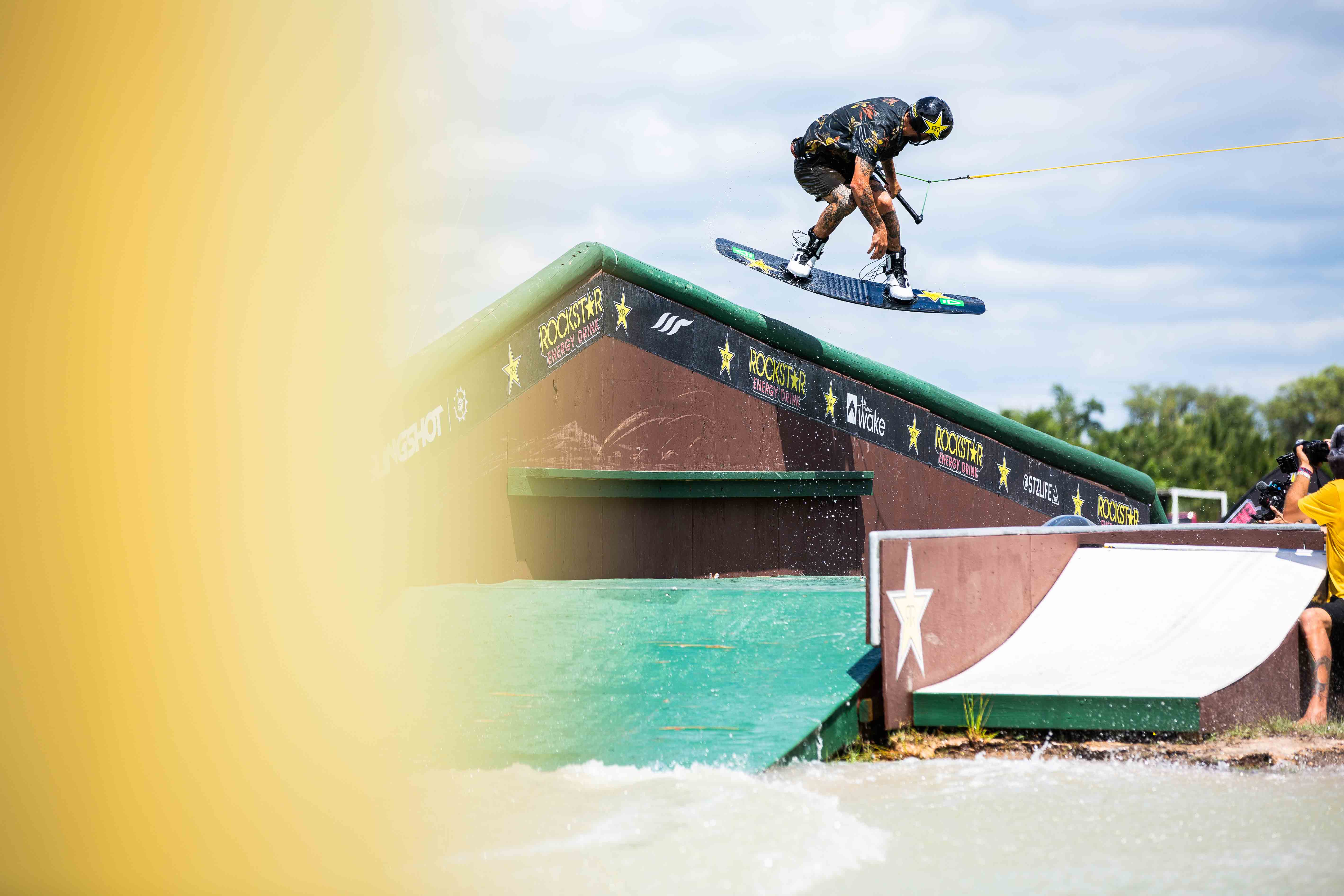 Brenton Priestley stepping up to the cabin rail

Nestled deep in the southern bowels of Georgia, there’s a wake oasis known far and wide as the Valdosta Wake Compound. Now this isn’t any ordinary cable park, mind you. This park is what you would call “unorthodox”. With a heavy emphasis on DIY and a “what you give is what you get” attitude, VWC has become known to riders all over the world, and that’s why they flock to it. On any given day, you could run into a rider from the States, Australia, Estonia (looking at you, Simon Pettai …), Canada, Argentina, and almost everywhere in between. It’s this phenomenon that has paved the way for one of the best cable events to hit the states: the Valdosta Yardsale. Now in its third year, the crew at VWC has done everything they can to one up the setup from years past, and this year was no different.

The System 2.0 setup has become a staple of VWC, known for its ever-changing landscape, thanks in part to all the land gaps that make building new rails much less complicated. Add in a handful of corrugated pipes and you’ve got limitless possibilities. Seriously, take a peek at a Space Mob video and you’ll see how the creativity just flows from there. 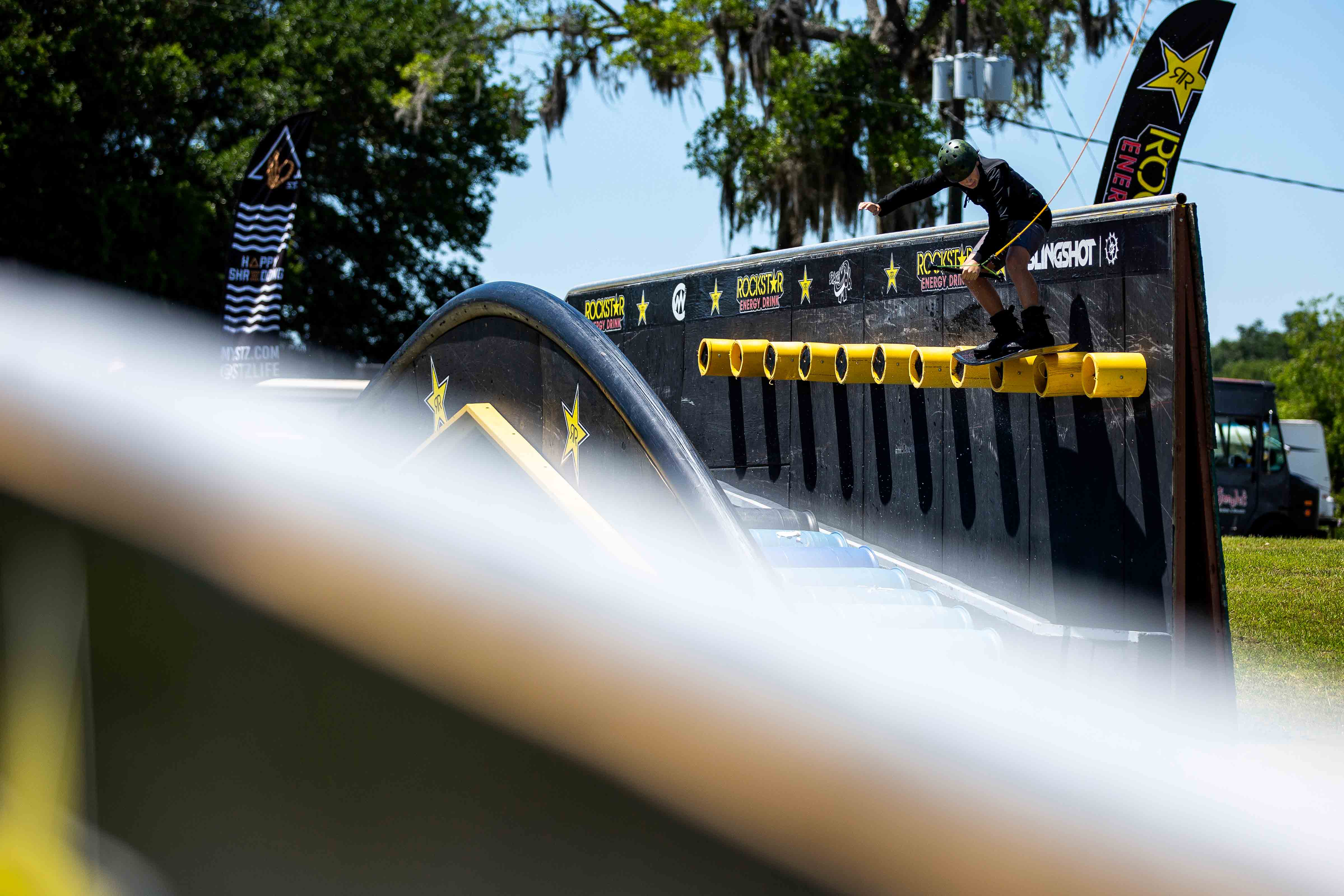 Gavin Stuckey navigating his way through the bumpers

Rolling up to the park a couple days before the event, I was blown away by the crazy facelift that the park had undergone. The 2.0 was almost unrecognizable from the last time I saw it. The “Cabin Rail” (the main rail between the second and third ponds) was still intact but everything else had been torn down and redesigned. I know it took more than a few man hours in the hot Georgia sun to get that work done. My favorite hit, and what a lot of the riders gravitated to, was the knuckle ramp built onto the side of the storage container gap. Seemingly inspired by the “Mini Mega Ramp” at Thai Wake Park, this “bump”, we’ll call it, had an alluring appeal to the riders for its mixture of simplicity and technicality. Looking at it, one would think it’s the easiest rail out there, but after seeing a few riders go at it they began to realize that it was nothing to overlook. Depending on the trick in mind, the rider would have to pop at the perfect time to catch the transition on the way down and if they popped too late then it meant landing on the water (a pretty big drop) which usually had them laying out on their back from the impact. It was host to some of the most entertaining hits of the weekend, because of the precision involved and it’s snowboard-style look. 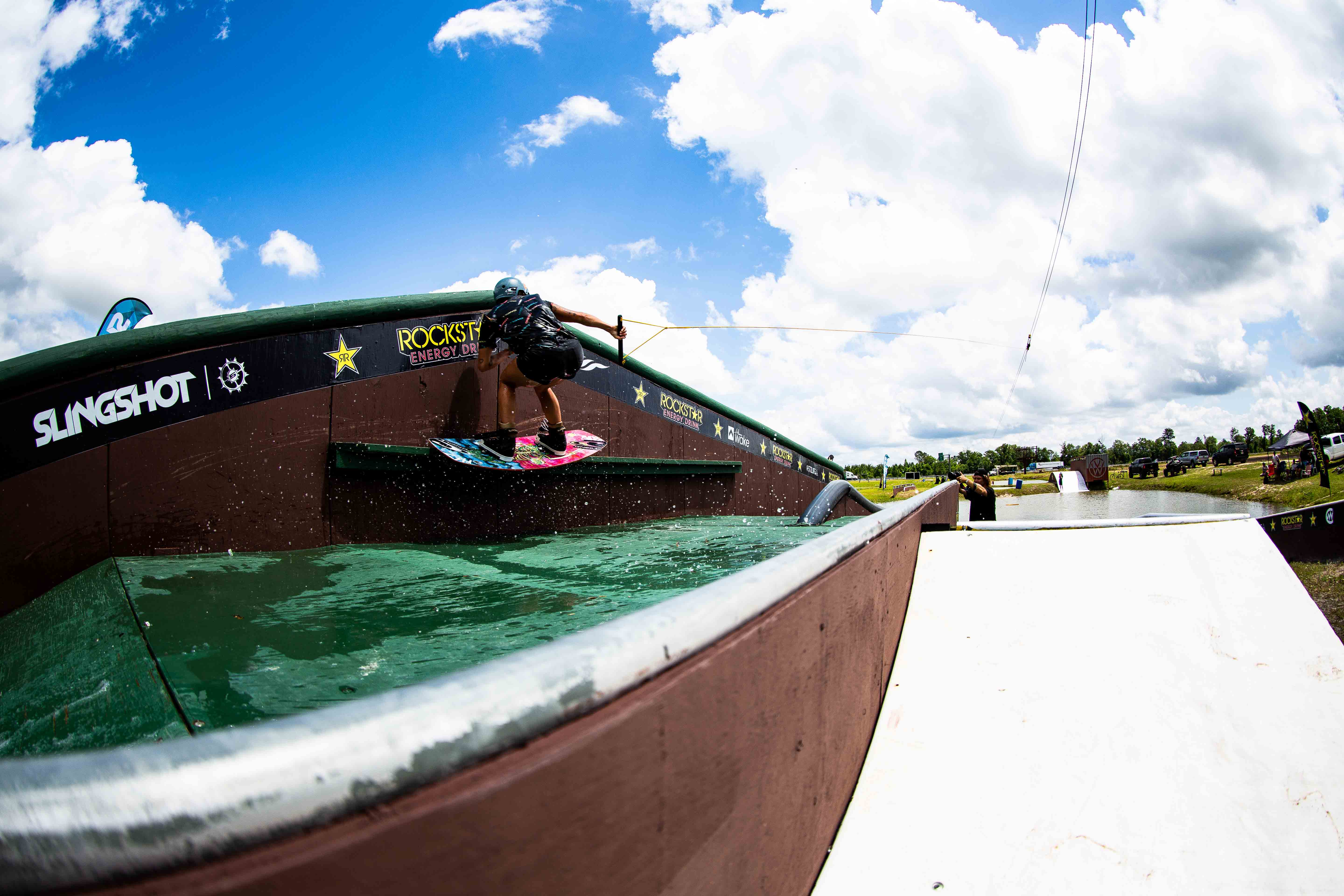 Like years past, the first day of the contest invited riders to try their hand at qualifying to get into the main event. Unlike the main contest, the qualifying was held on the full size cable. Taking four guys and one girl out of the nearly thirty that signed up, the pressure was on to stick their best run in the quest for a Gold Jacket. Each rider was given two full laps to get their best overall run down. The judges were looking more for clean landings and controlled riding rather than who can do the most spinny-flippy thingies. The riders had to convince the judges that they weren’t going to get worked over on the 2.0 setup. When it was all said and done, we had a pretty rare situation on our hands. All four men’s wild card spots had been filled by siblings: the Stuckey brothers (Trent and Gavin) and the Harris twins (Josh and Brandon). It wasn’t just a fluke either, it was very much deserved. Trent and Gavin have been riding for a handful of years now, honing their skills at their local spot in Orlando, OWC, and stepping up in a big way by putting down almost mirror runs to join the Yardsale festivities. They were both on point all weekend long. As for the Harris twins, if you can tell them apart then you’re way ahead of the game. Luckily for me, I’ve been able to spend a good amount of time with these brothers and can now finally tell who is who. Their runs may not have been mirrored like the Stuckey’s but they put it down in true Harris fashion: rewinds, tech/smooth hits, and tons of style. The women didn’t disappoint either. Eager to get that wild card spot, Maryh Rougier from France came out swinging and made a name for herself fairly quickly by qualifying along with the guys. 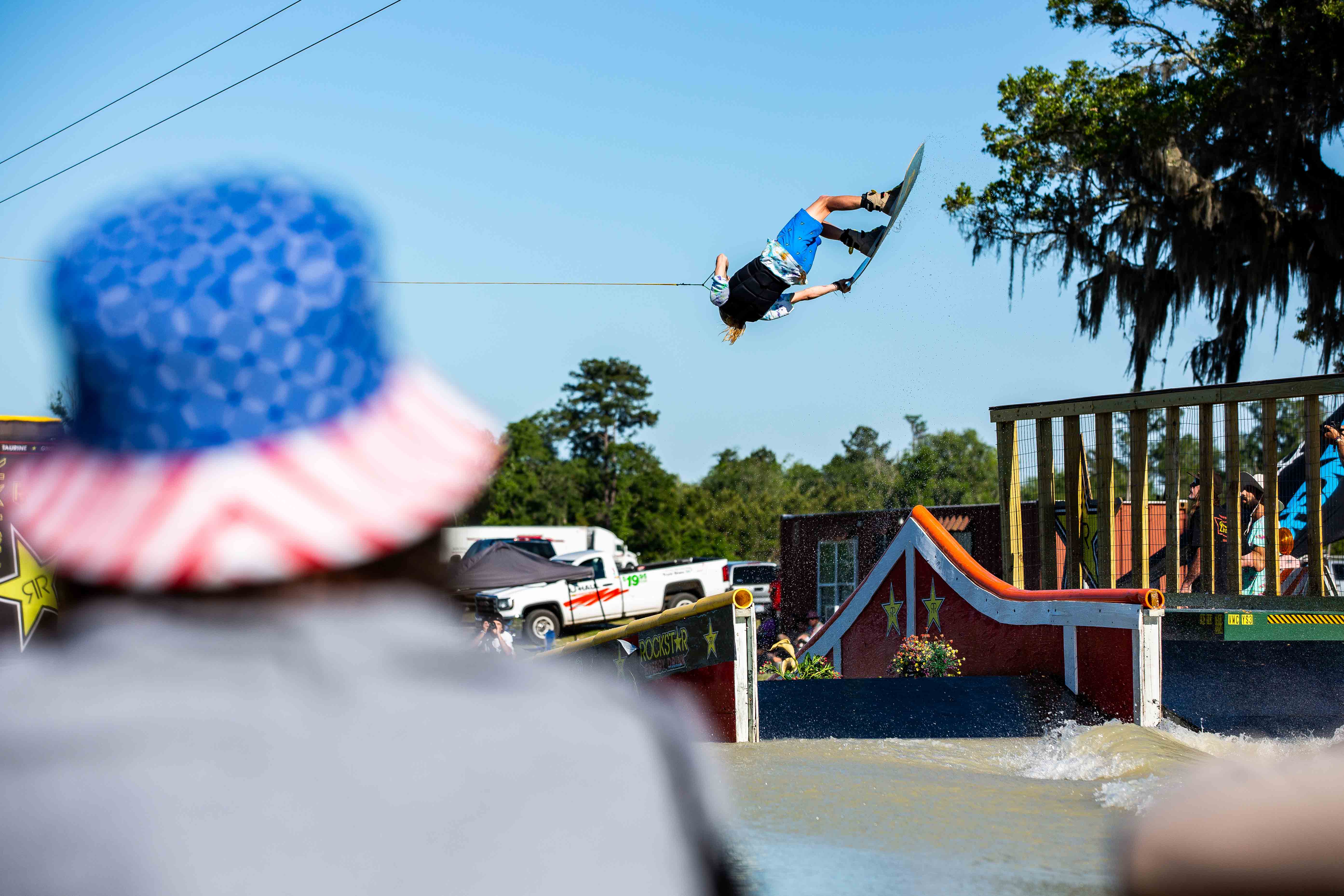 The invited riders list was a “who’s who” of the world’s top rail riders. With plenty of domestic riders as well as international, almost every corner of the globe was represented. France, Austria, England, Canada, Argentina, Australia, Thailand, and more were all out in full force. Kicking off the main contest was the hunt for the Best Trick. In a brand new format, each rider was allotted 15 minutes to session any rail on the course to try and put down the most insane trick they could. Each rider was filmed and, after their session, submitted the trick they liked the most to be judged. At the end of the day, all the tricks were put on a highlight reel and shown to everyone for voting. That’s what makes the Yardsale so special. No head judge, no bias, just riders supporting riders. To even begin to breakdown the amount of hammers dropped during that 12-hour period would be futile, but there were definitely some that stood out. Crosse Bearden’s tweaked out tail roll to blind off the spike rail was huge, Blake Bishop’s frontboard bagel 450 on the top of the chicken wire wall was sick, Dary Znebel’s cabin creeper hit to backside 3 rail to rail was insane, Trever Maur’s front 270 switch frontboard fake out on the cabin rail didn’t make sense, and John Dreiling’s back 270 over the gap between the cabin rail and the metal handrail (probably 20+ feet) was one of the most gnarly things I’ve ever seen. I could go on, but you get the idea. If you haven’t seen the mashup edit yet of all the submitted tricks then do yourself a favor and check it out on alliancewake.com now! It’s pretty amazing how quickly a 15 minute session can go by when you’re laser-focused on one (maybe two) tricks. Most of the riders took a safe route and put down a fairly easy trick, making sure they had something to submit, before moving onto something more difficult. This strategy panned out for some, not so much for others. By the end of everyone’s session, there were more than enough tricks to fill a highlight reel. Clement Nadal from France earned himself top honors with a toe back 180 up into the yellow bumpers coming off the wall to backside 50/50 backside 180 out. Another Frenchie, Maryh Rougier, took best trick for the ladies with a sick cabin creeper rail to rail noseslide backside 270. 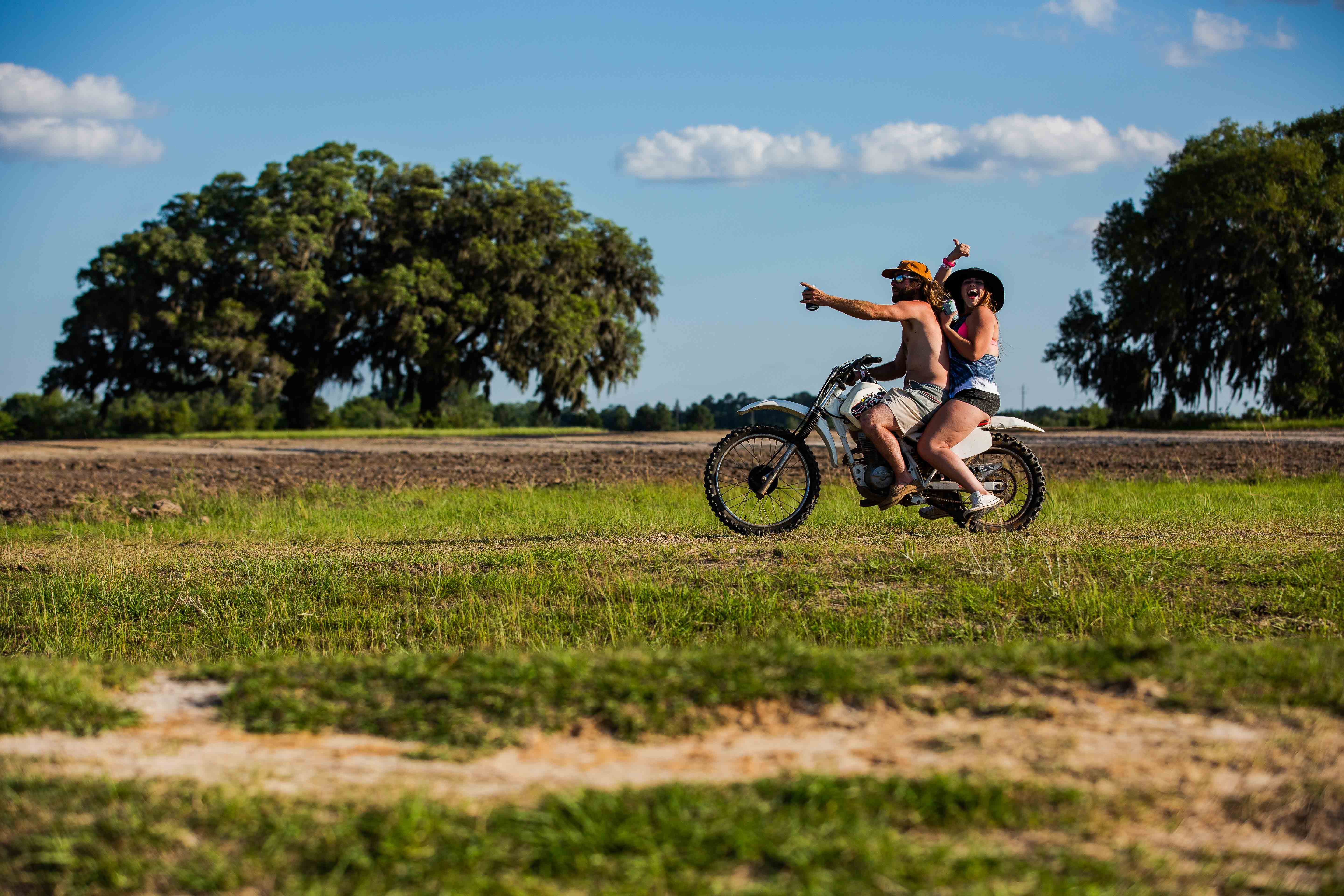 “The camp site is that way! I think…”

As the sun set on a successful day, the true nature of the Yardsale began to creep out. Rockstar fired up the grill and the party was just getting started. The beauty of a contest site that allows camping is that there’s nowhere to go and nothing to worry about so you’re free to just kick back and have a good time. As the moon began to light up the night, all the riders and spectators began to mingle more and more, well into the early morning hours. The RZR’s were ripping around and the community atmosphere was at an all time high. Was there another day to this event? Yes. Did anyone seem to care? No, not really. The adrenaline was still flowing from the day so the chances of making it an early night were pretty slim to none. 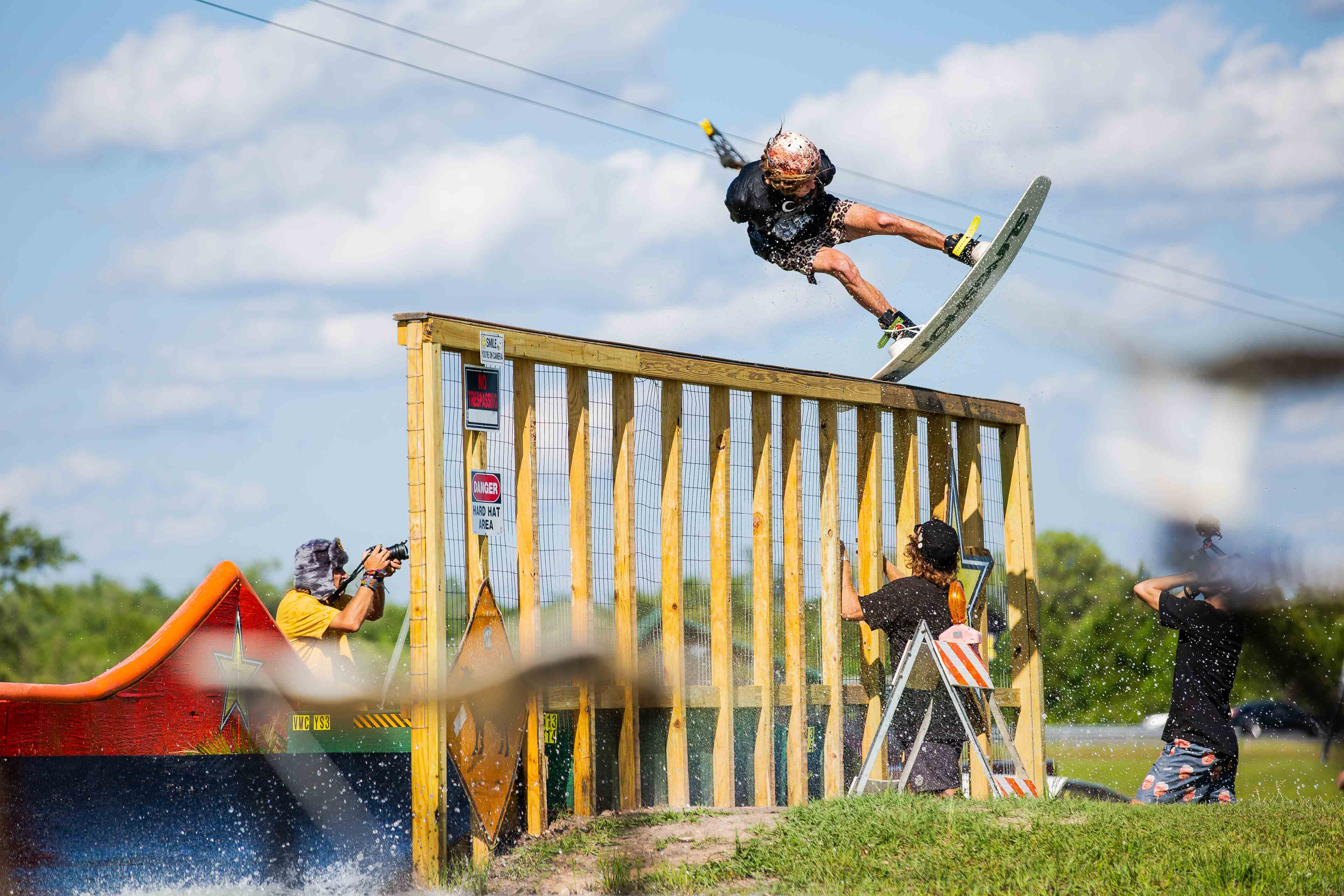 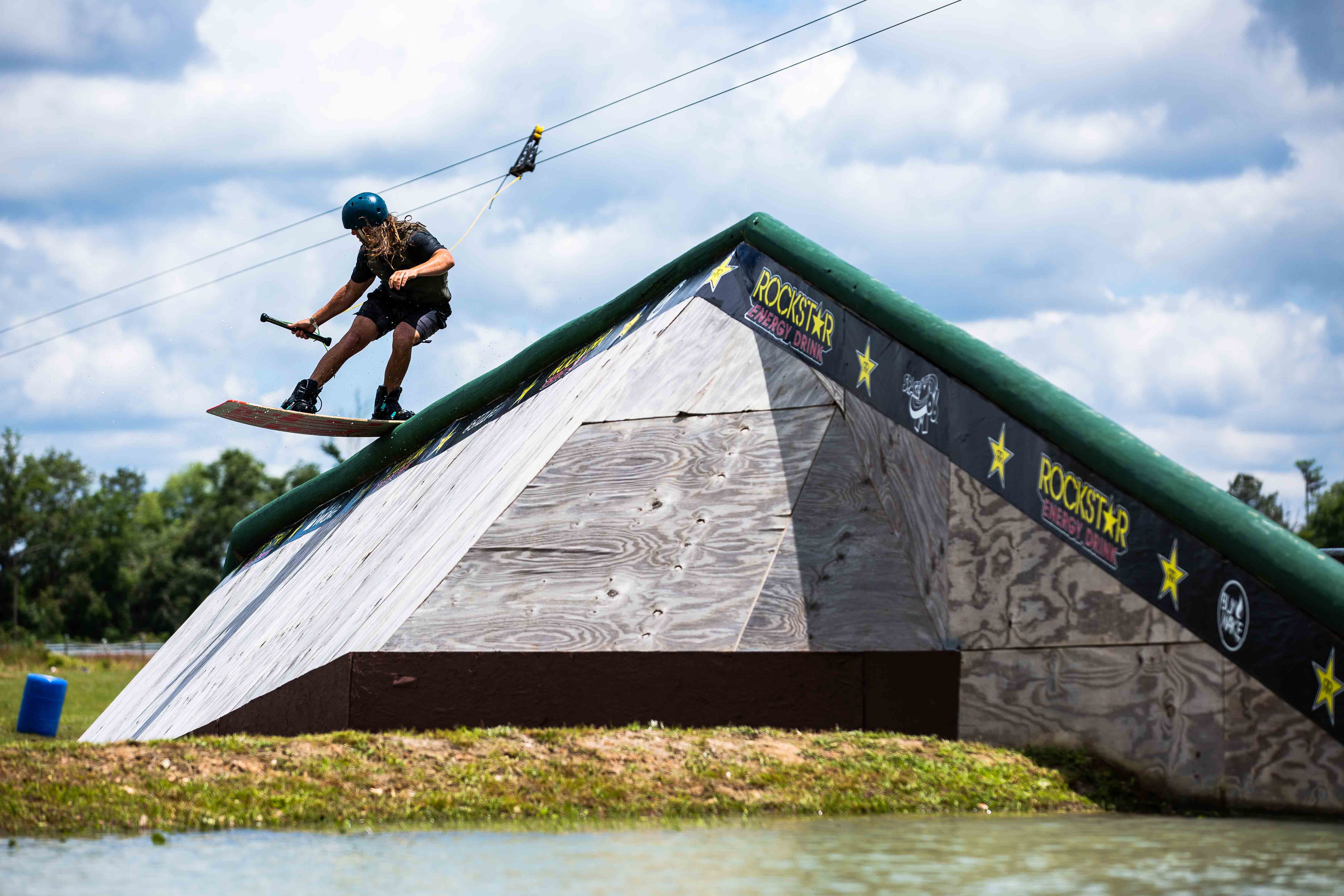 The next day shifted focus from “Best Trick” to “Best Line”. If you don’t know what a “line” is, firstly, go take a timeout and think about what you’ve done … jokes aside, it’s when a rider links up two or more tricks in the same run with no fumbles, bobbles, or falls. To say getting a line down the Yardsale setup is tough is somewhat of an understatement. Short run ups, crazy rails, and a lot of grass in between made for some pretty interesting runs. The judging was done basically the same way as the “Best Trick” portion. However, the riders were broken into heats and shared time on the water rather than getting their own 15-minute block. The top rider of each heat then moved on to the finals where they battled it out with the other top contenders. By the end of it, we had Liam Peacock, Quinn Silvernale, Dary Znebel, Crosse Bearden, Jules Charraud, Blake Bishop, Guenther Oka, and Victor Salmon making up the Elite 8 in the finals. These guys had been throwing down all weekend long so you think they’d be pretty gassed by the time finals rolled around, but this wasn’t the case. Fueled up and ready to go, everybody put down their best hits over the two hour time block. One rider stood out above all the others and, just like his performance last year, Liam Peacock blew plenty of minds this year. Incorporating two of his best trick submissions into his run (really Liam? Seriously, this kid can tantrum off of anything), Liam made mince meat out of the course and took home a Gold Jacket for his troubles.

Once the dust settled and all the riding was through, there was still one more award to give out. After killing it all weekend and getting some of the most creative lines the Compound had ever seen, Georgia’s own Crosse Bearden was dubbed “Best Overall” by all the riders and got to rock his own Gold Jacket. In true Valdosta fashion, the party went on long after the contest was done. The Yardsale is what a contest should be. Low pressure, good times, camping, bonfires, and everything in between. If you missed it, make sure to change that for next year. It’s going to be bigger and better than ever. 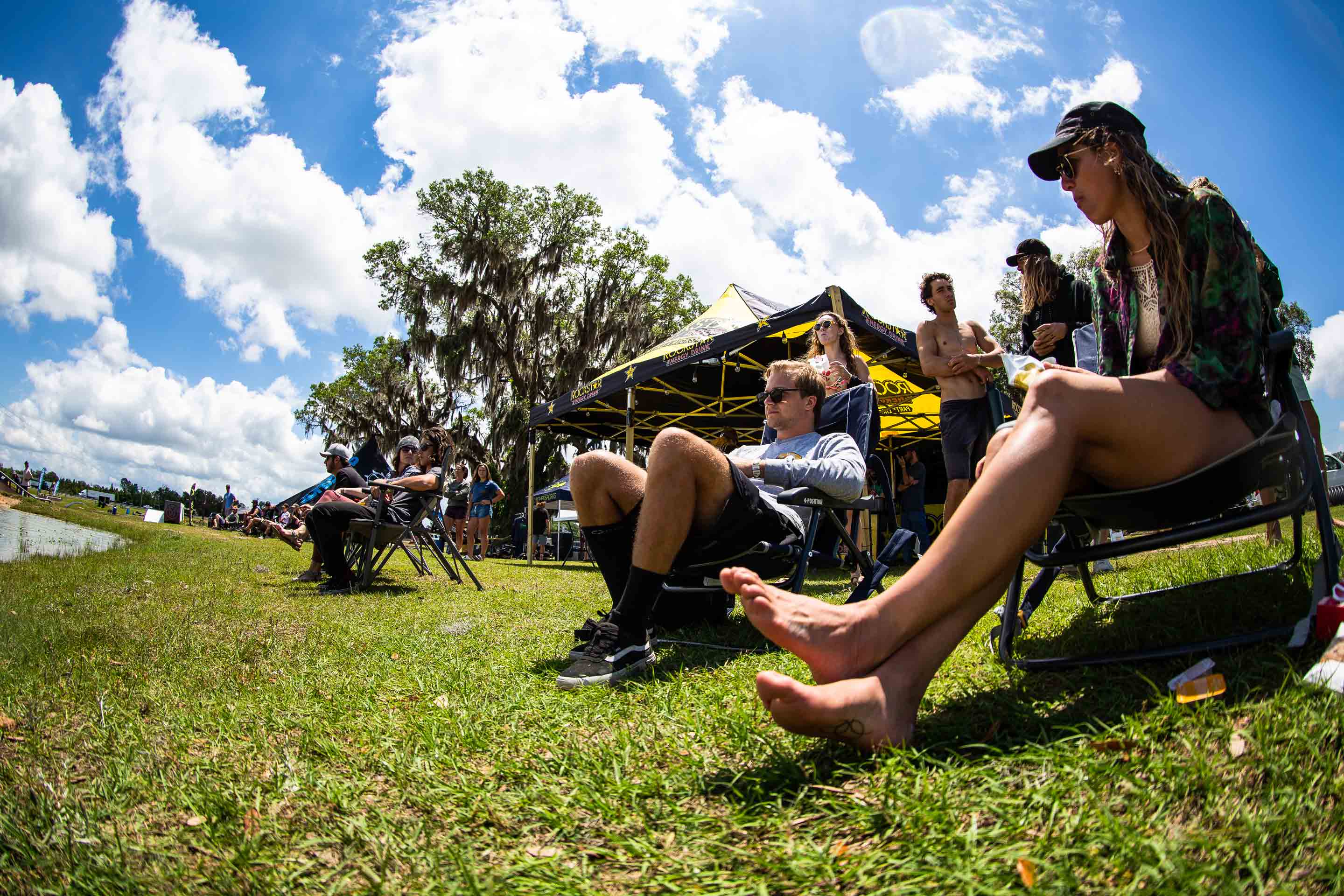 Sun’s out, fun’s out 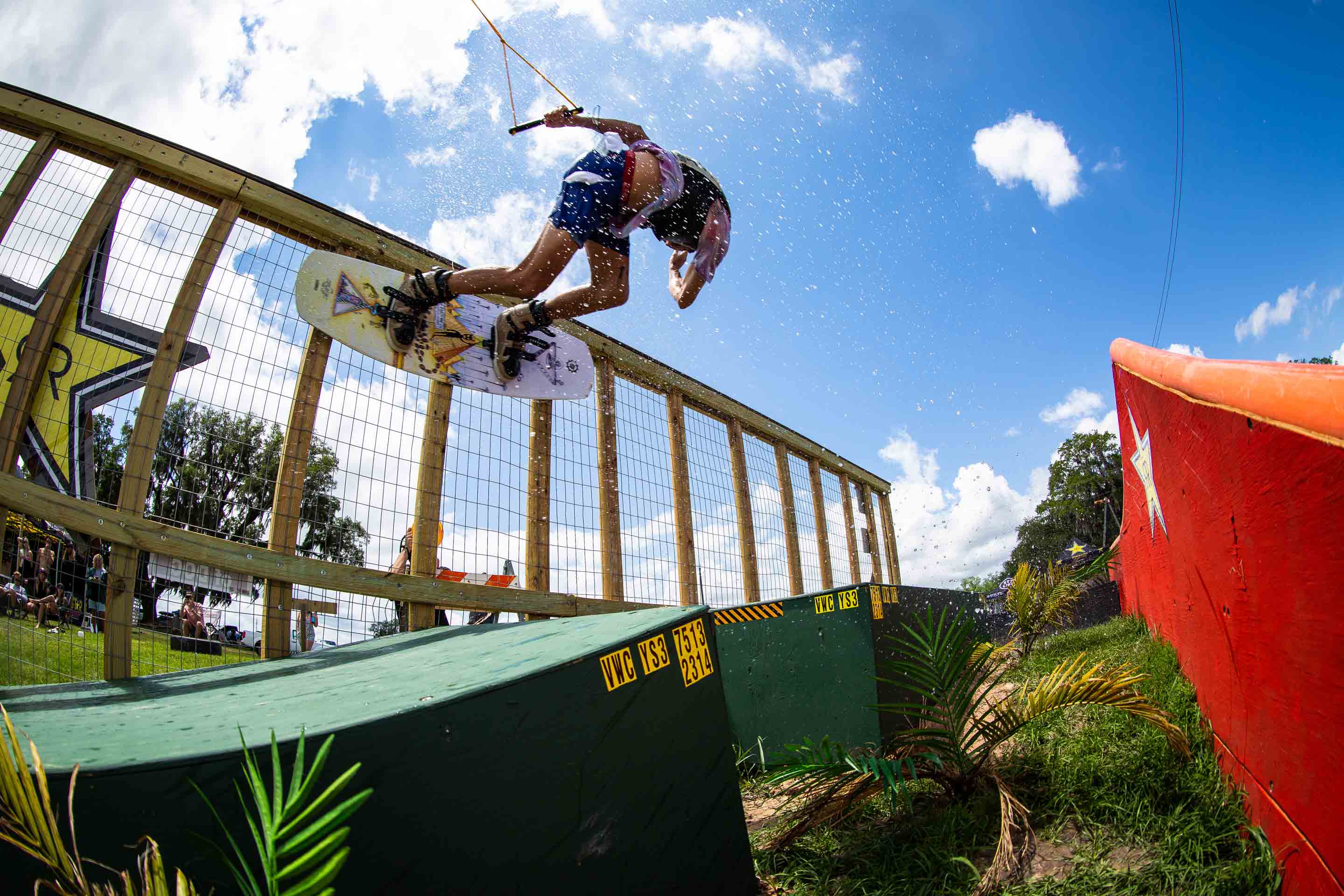 WMJ wrapped up through the chicken wire 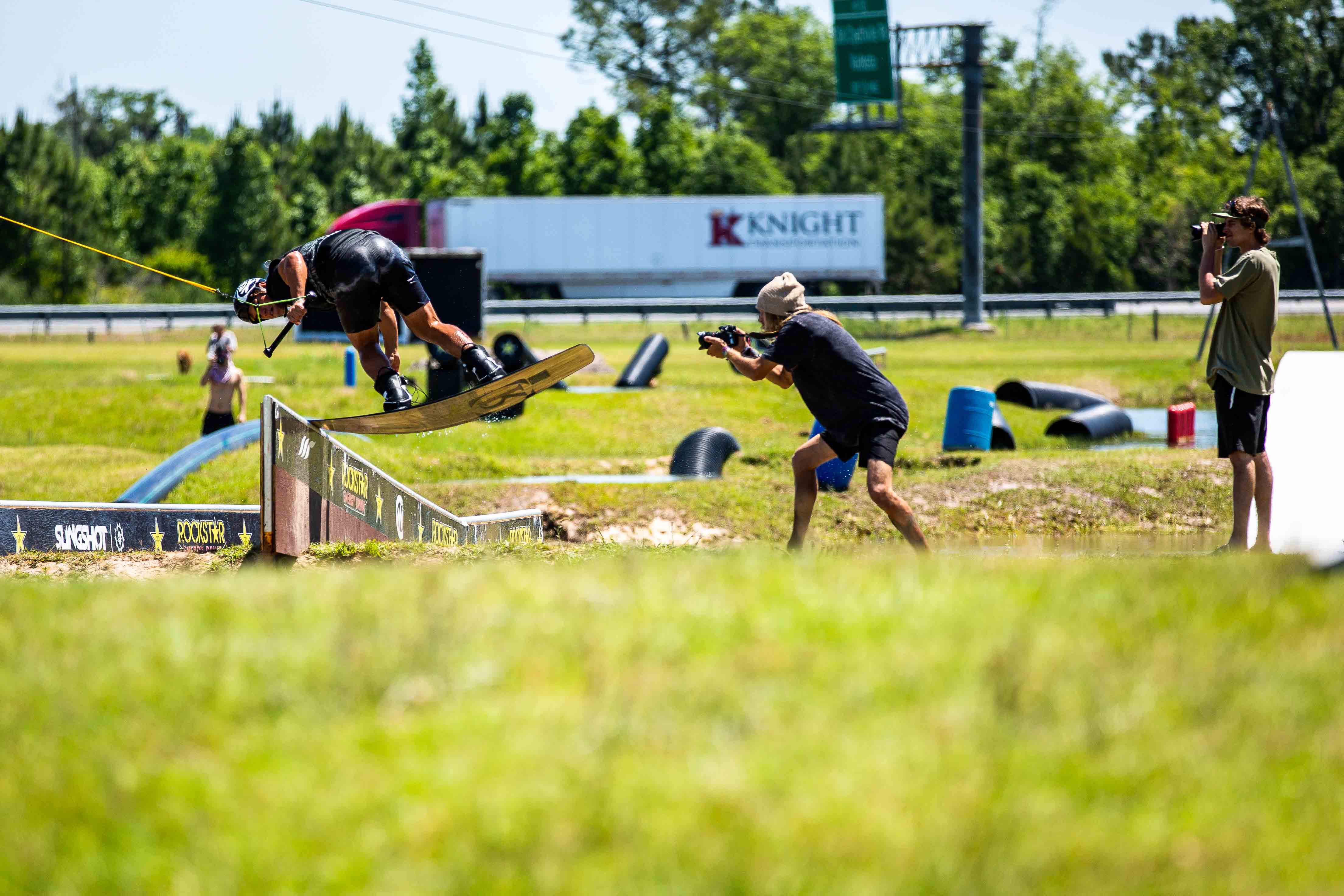 Liam Peacock all the way on his tippy toes 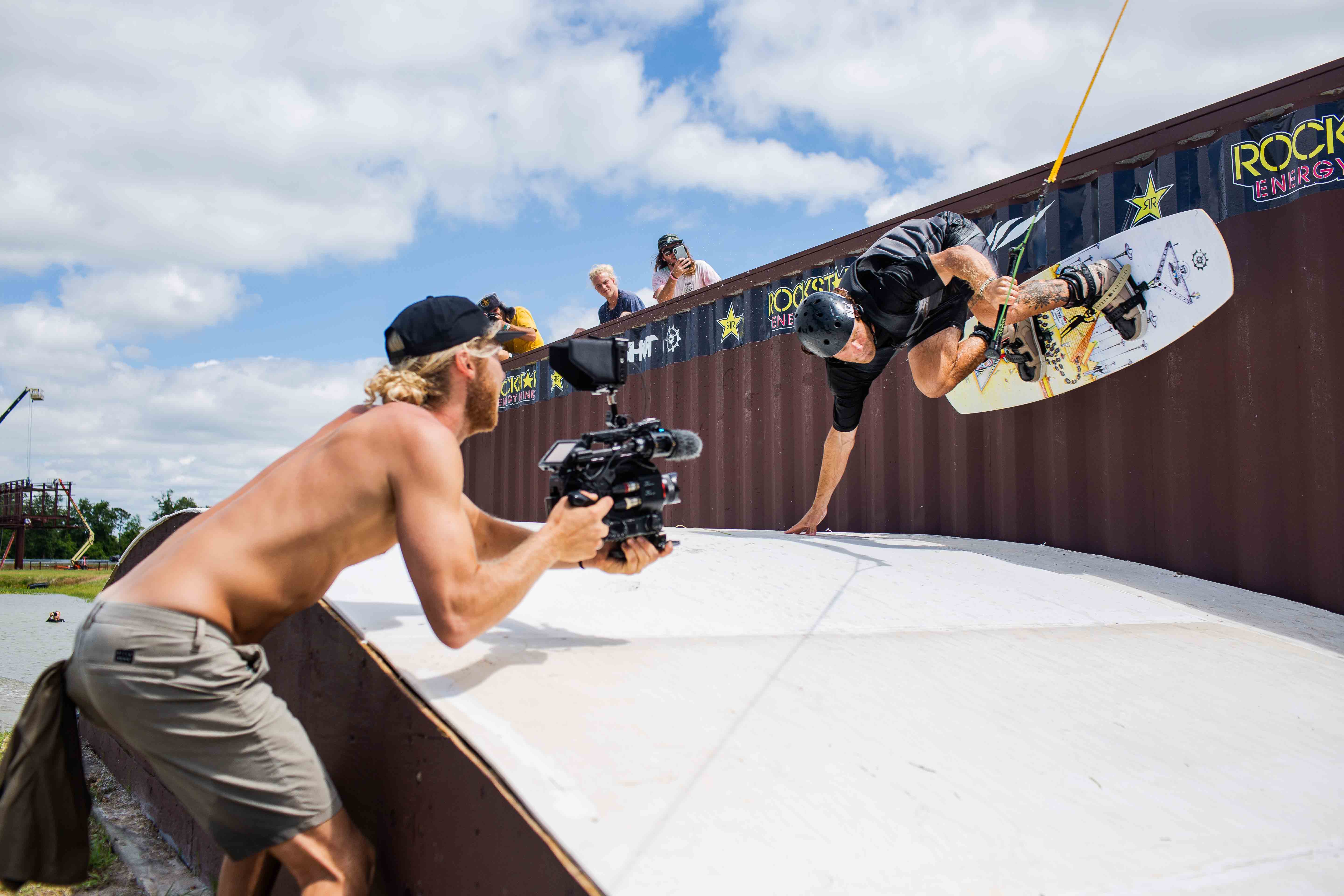 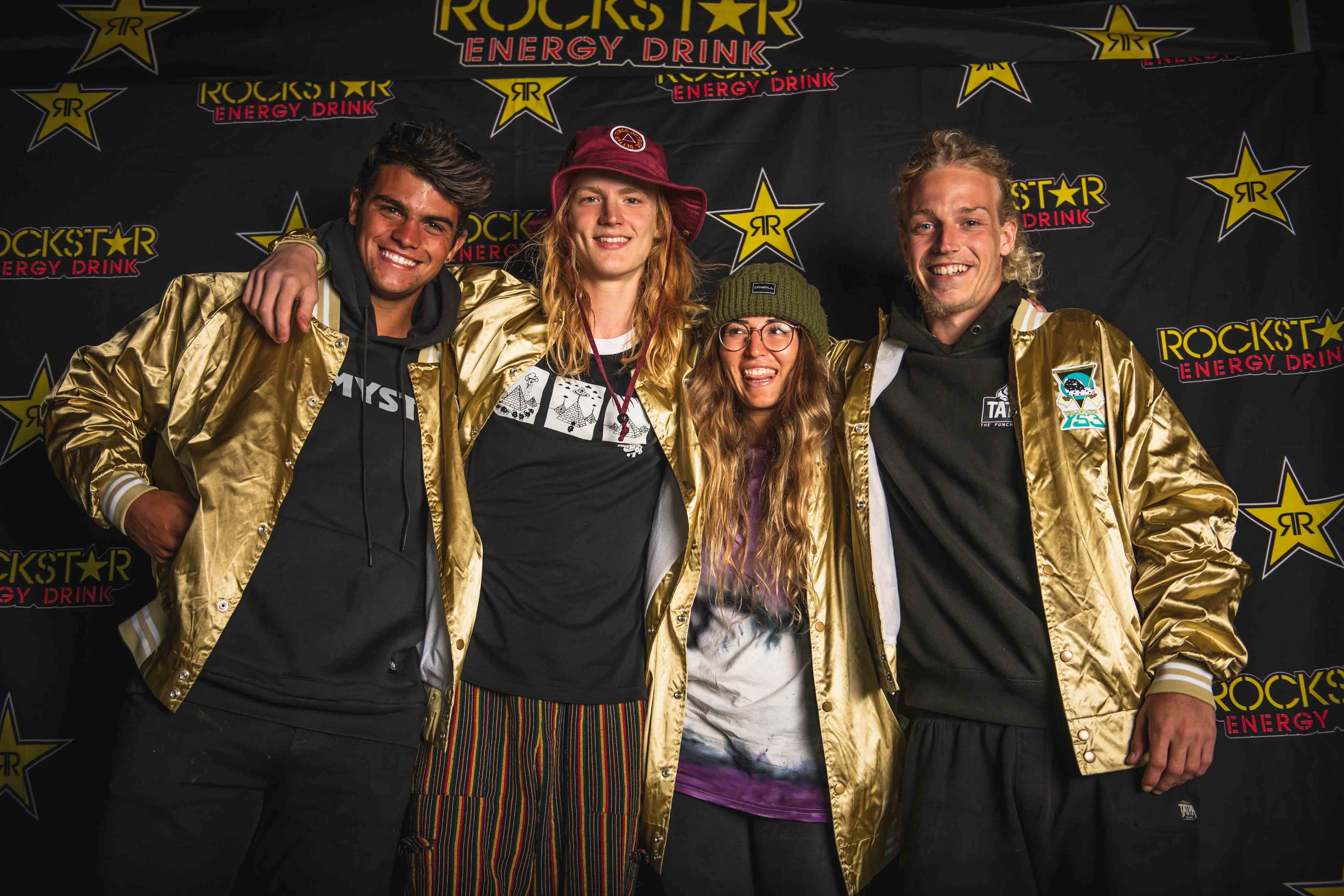 Gold Jackets all around (photo: Donoso)