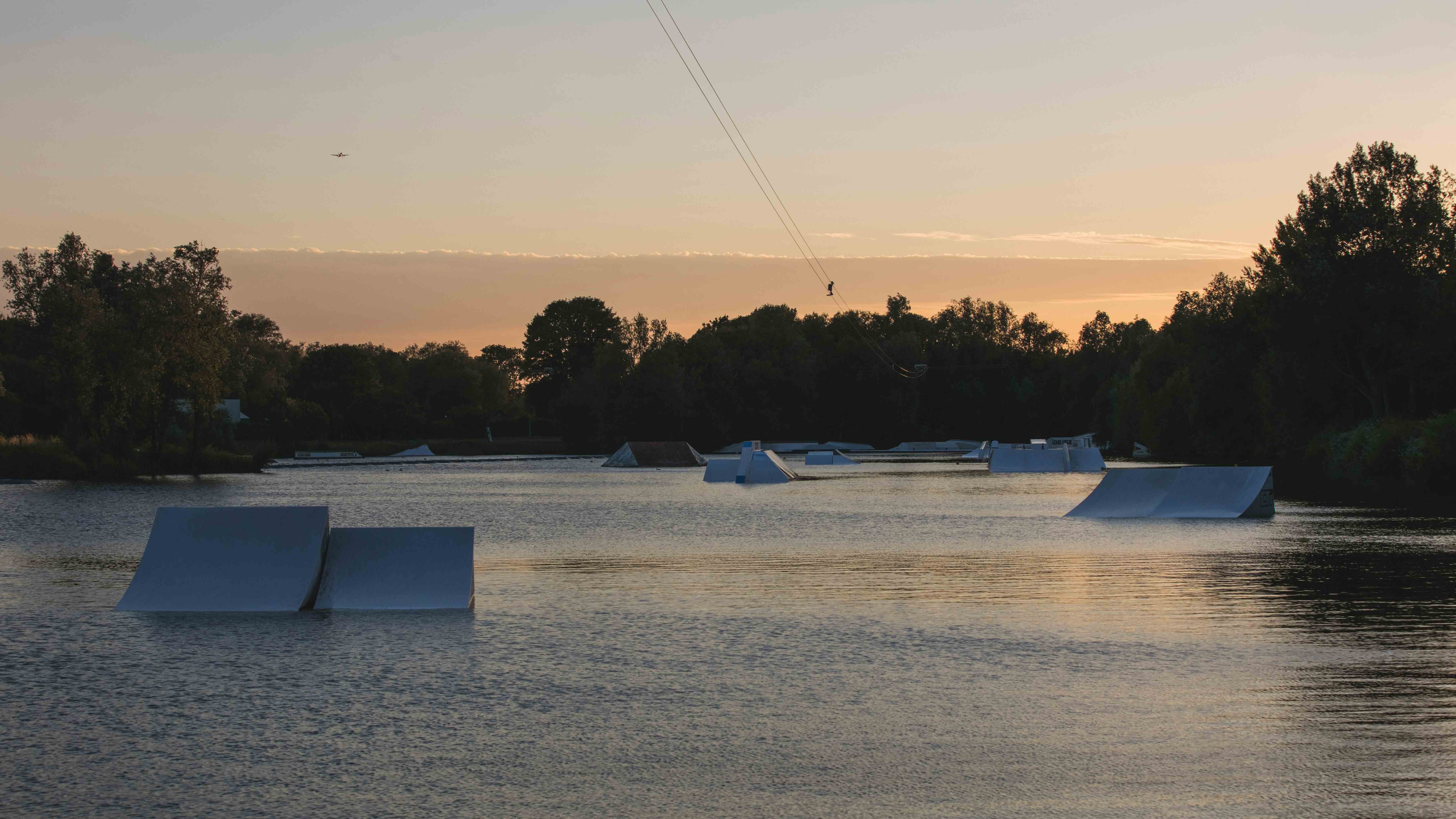 What comes to mind when you hear the words “English summer”? For most of us in the UK, that phrase means little more than our fellow countrymen being a little less grumpy than usual, and rain clouds so imposing they make Seattle look the Bahamas. But imagine the opposite of that and you’ll start to get a picture of “The Great English Summer of 2018.” Yeah, we couldn’t quite believe it either. I even heard at one point that we were hotter than Zanzibar. Now, Brits can’t usually handle heat: turn it up and we start ruining nature and burning our boobies. What’s more, give us the slightest glimmer of hope that the weather won’t suck later in the day and we’ll no doubt find a way to bunk off work early. No wonder our economy’s in the toilet. I have trouble avoiding the cable in crisp October so, during the summer, I had one rule: if the weather sucked, I wouldn’t hit the cable. But it rarely sucked, hence, I’m writing this article.

Summer 2018 at Liquid Leisure was any cable rider’s castle in the sky. Every sunny session had nothing but flat water and heaps of plastic there for the taking. My life started to resemble one of those old Mastercard adverts: board and bindings – £1200; vest and helmet – £130; Cable membership – £850; that feeling when you clock off work early and beat all the school kids to the water – priceless. 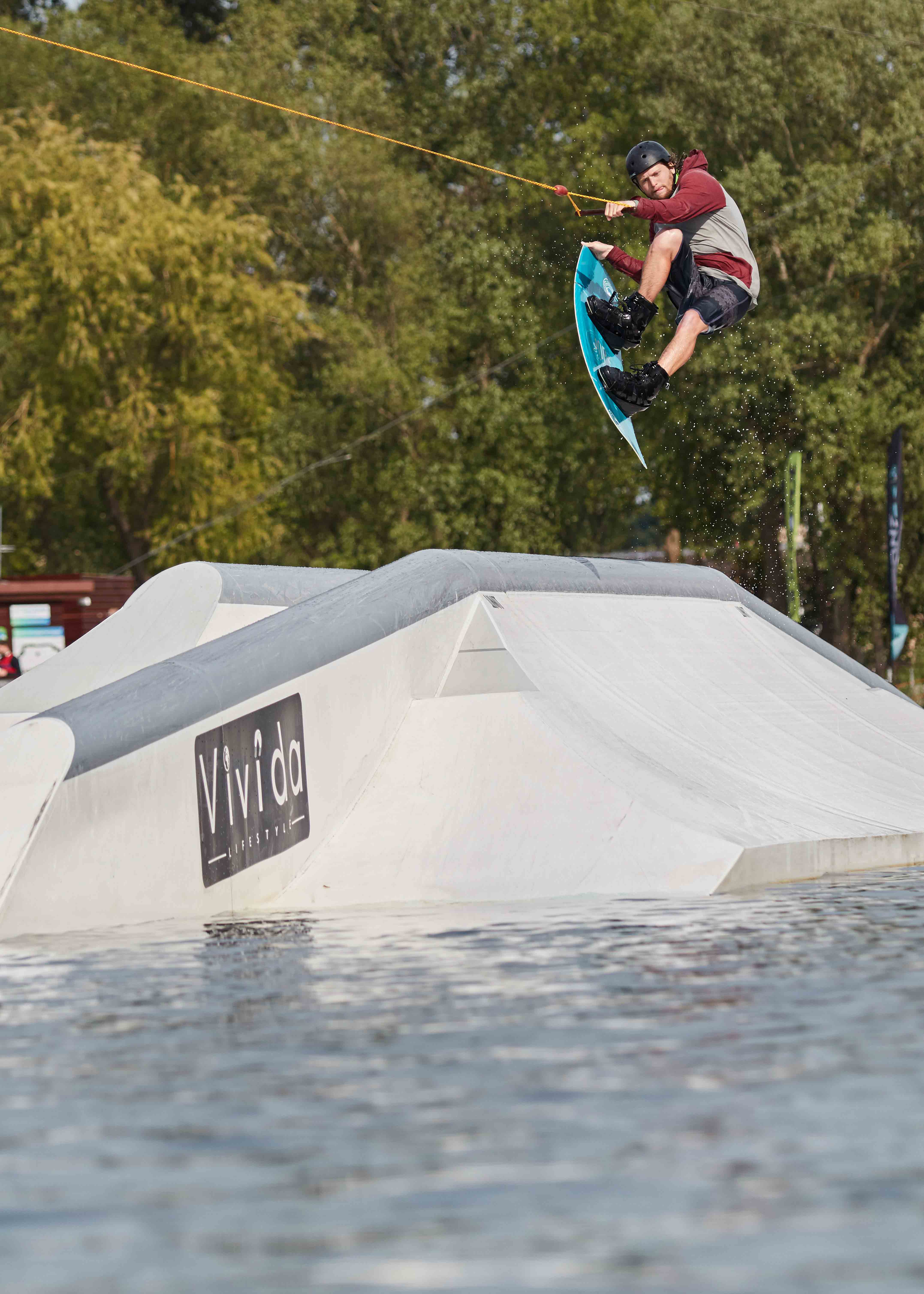 If there’s some transition to be found, John Dreiling will find it

Fair warning though, Liquid Leisure is in Slough. Slough sucks. If you don’t wakeboard, don’t go to Slough. Slough sucks so bad that Ricky Gervais deemed it the optimum downbeat setting for his original version of “The Office.” It sucks so bad the Royal Family hold their breath when they drive through it on the way to Windsor Castle (allegedly). It even sucks so bad that one of Britain’s most esteemed poets felt like dissing it across multiples verses back in 1937 (John Betjeman’s “Slough”, I encourage you to google it, it’s rather entertaining).  Of course, you are a wakeboarder and since the creation of Liquid Leisure’s legendary Plastic Playground series, a competition that has fast become a highlight of the competitive wakeboarding calendar, Slough has been nothing short of a mecca for cable riders. The summer of 2018 was obviously no exception, and Liquid Leisure had a never-ending list of greats passing through, ready to tear up a lake full of plastic that never seemed to stop moving. 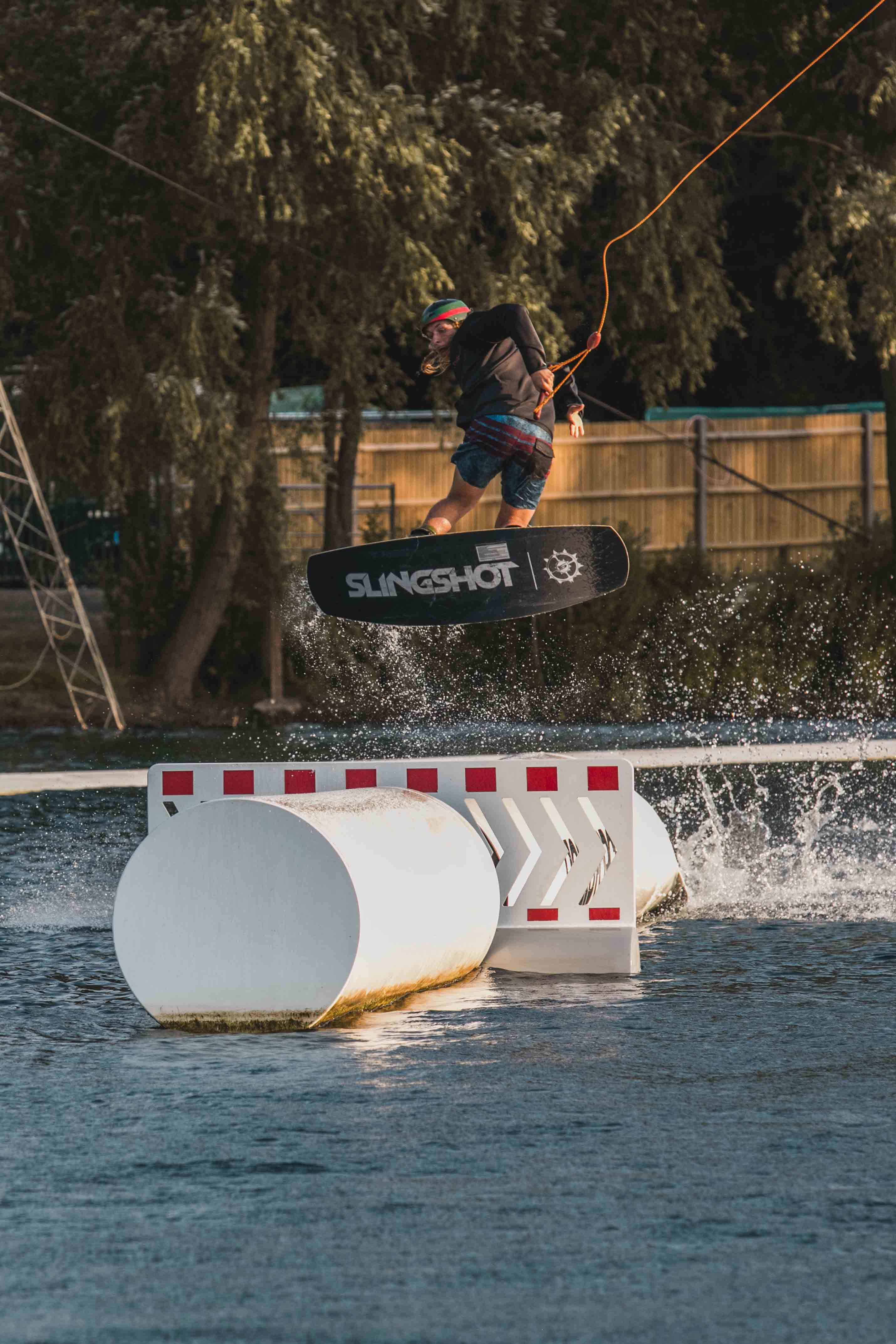 The season started off normally with the parks’ usual 27 features in the water. (That’s Liquid Leisure’s “normal”, as it has more Unit Parktech features than anywhere else in the world.) Until Unit swung through from Germany and helped to transform the park into the Frankenstein’s monster that was the London stop of the 2018 Plastic Playground series. So despite the comp of ‘17’s best efforts and new lines, 2018’s setup was an entire level up, with a myriad of features being chopped and changed in ways I couldn’t even have imagined before. For example, half of the Kaesan feature was attached to the side of the WakeTheLine rail, while the other half was assembled beside the Westrock signature feature, providing new and original ways to step up, safety into banks and rail-to-rail from feature to feature. The already hacked Henshaw was split into two gnarly setups with one half joined to the other half of the WakeTheLine (I snapped a board on the step-down between the two features the first time I hit it), and the Henshaw’s downrail was used backwards as an uprail and hacked together with our funbox. Thrown in on top of that they had an add-on rail for good measure, and presto, we had the feature aptly labelled “The Megatron” in the Plastic Playground common parlance. 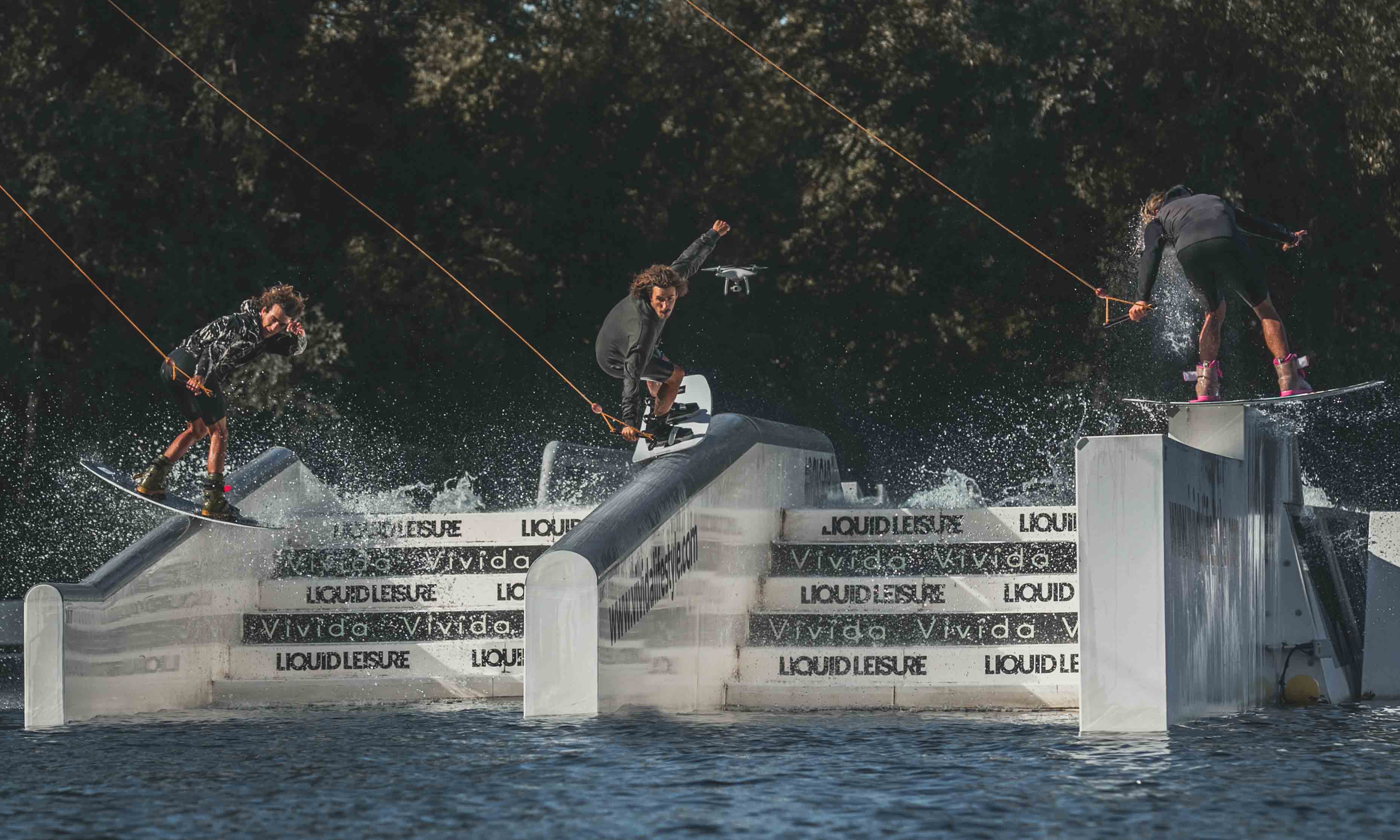 Triple trouble with the “Spanish Mafia”

I like to remind myself that I’m a lucky man: I can call Liquid Leisure my home spot. Then I like to remind myself that I’m an extra lucky man because I am a photographer who constantly has the opportunity to sink countless hours on the water shooting some of the best riders on the planet. Then I remember that I’m the luckiest man this side of Lucky Mansville thanks to the most dedicated and hardest working cable team by my side. No shot was out of reach, and never was an opportunity missed to capture the perfect image from the right angle, even if said angle was pretty much under the running cables during opening times. Plus, there’s so much plastic surrounding whichever feature you’re shooting that you can barely see the water. Damn did we do our talent proud. A special shout out must be given to Ben Hounslow, our cable manager, for always being willing to spend time on a good idea. Such good ideas included the time when I really dug what Westrock Wakepark and John Dreiling had done with their signature rail and the tech series bank. Clearly, I had to get Liquid to follow suit, seeing as we had both features in the pond already. Ben, being the legend that he is, made it happen in a week.  Soon after, we went out in a boat on yet another sublime summer’s evening and had Matty Muncey throw down some insane hits, flipping off the Westrock’s safety into the tech series bank. Word spread fast about our new found creativity and pretty soon quite the gang wanted to join the fun and execute new ideas with me. Our next mission was to assemble a crack team of locals to orchestrate “The Pool Party Shot.” It went down like this …

“Cain, Freddie, Josh … your mission, should you choose to accept, is to have Cain take the safety over the end of the pool whilst Freddie and Josh party in it underneath. We’ll have you two holding your choice of beverage and acting like frat bros or something. I’m sure you’ll figure it out. Cain will then land on the down rail coming out of the Vivida mega pool. The reputation of the wake park and your cojones hangs in the balance. Can I count on you?”

As you can see, these fine men didn’t let me down. Oh, and in case you were wondering, there’s no funny business here. Cain’s board really is that close to the boys’ heads. 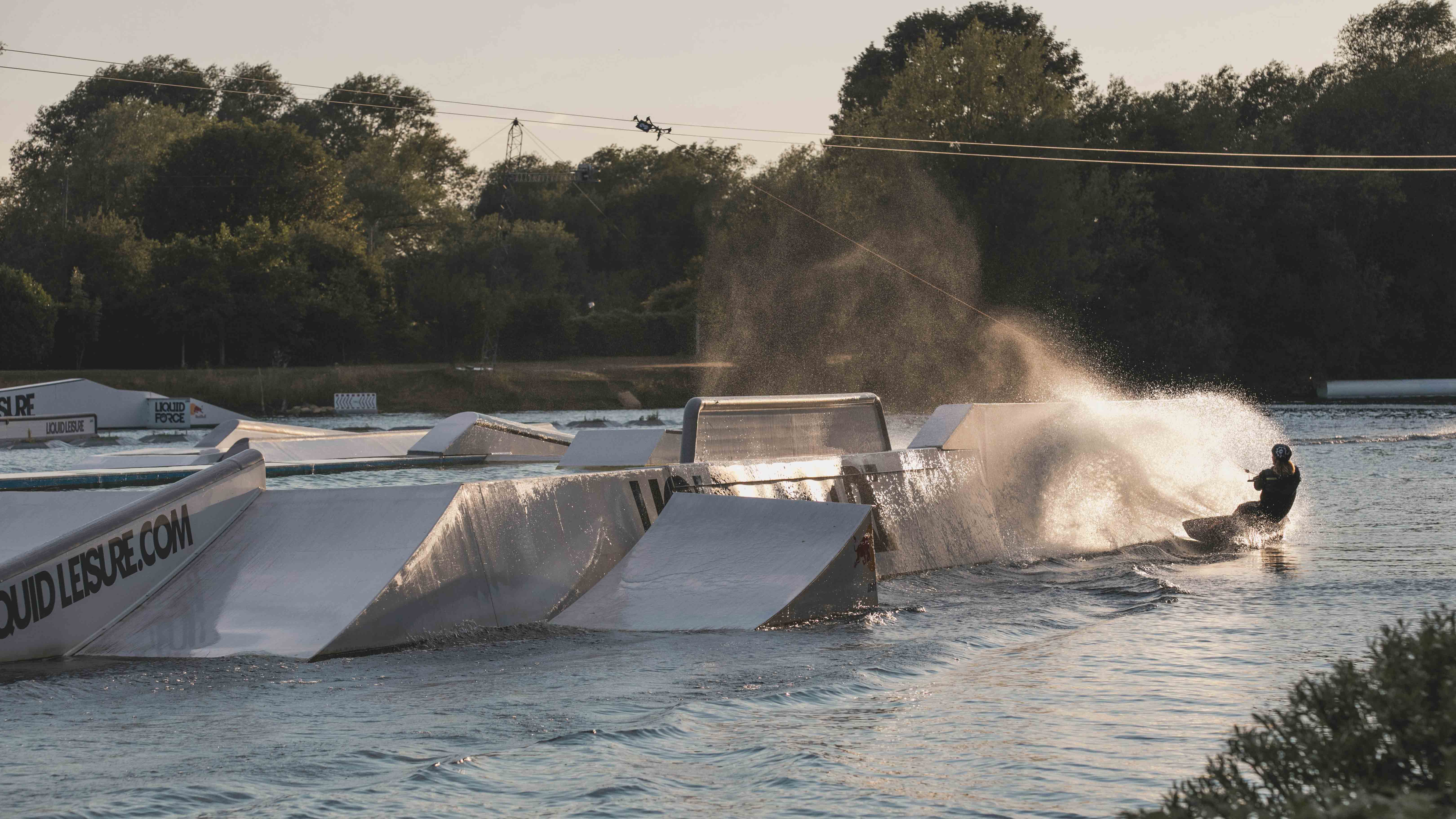 Spray it, don’t say it

I know I began this article taking my hat off to 2018’s fine summer weather but I’d like to end it by giving some serious props and taking all my other hats off to the best cable staff a wake park local could wish for – FYI I own a lot of hats so this is no small feat. Will the world famous scruffy-maned ‘Spanish Mafia’ consisting of JuanCa, JuanLu and Manu please come forth and take a bow. These guys were a key part of the Liquid family; if you’d spent five minutes down there in 2018 you’d have seen their handsome mugs smiling back at you. There’s not a lot I wouldn’t do for these guys so you can imagine my reaction when they approached me asking to do a season finishing shot of them riding triples. For this shot, we hit up the mega pool gap and nailed every damn route out of the pool. In case you hadn’t realised by now, I’m not about the half measures. If you’re going to do something, do it well. And in this instance it needed me going full cable rat and bunking up with them for an evening so we could get an early start and catch that crisp first morning light before the cable opened. Yeah, I knew the image would kill. I didn’t know it would kill this much though.

Of course, now that Spring is in full flow, all this summer wake chat is starting to get my juices going for 2019. I’m sure Stuart Marston is already deeeeep into his plans to top last year’s Plastic Playground. FYI the only Plastic Playground event planned – no pressure, Stu! Actually, no, let’s dole out the pressure left, right and centre because I like to believe we cable riders thrive on it. Plus, let’s face it, given last year, 2019 has some mighty big shoes to fill. So let’s thrive under this pressure, welcome even more legendary riders through Liquid Leisure’s gates and make it another one for the record books. Big shout out to everyone who made My Liquid Summer the golden few months that it was. You made my happy place that extra bit happier, and for that, I will be forever grateful. 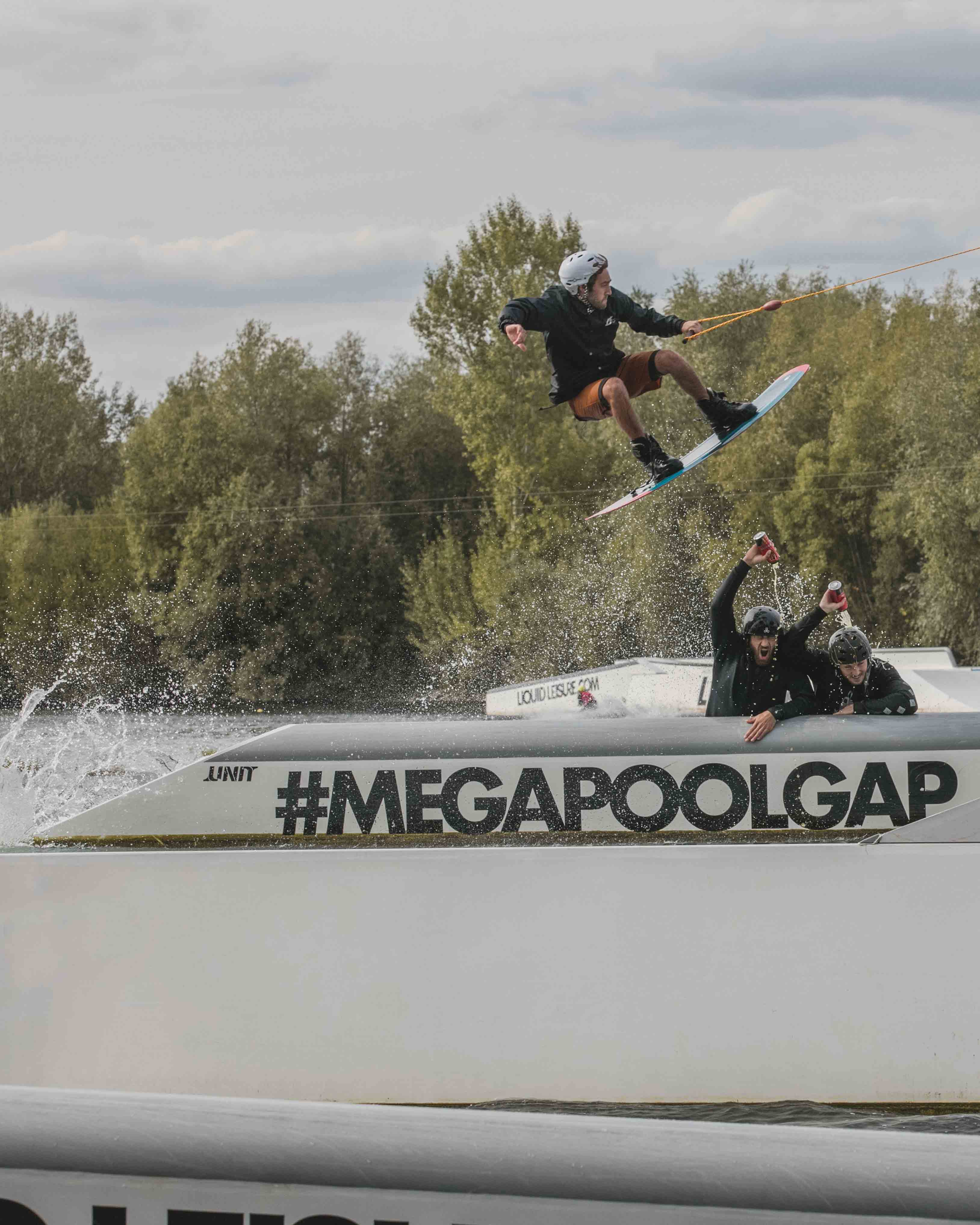