It is with heavy hearts and high hopes that we let you all know of the tragic accident wakeboarder Brad Smeele suffered yesterday while hitting the mega ramp setup at Lake Ronix. Brad has spent the past months not only living and working at Lake Ronix to make it one of the most unique and epic riding locations in the world, but also pushing himself and the sport by trying and landing tricks that have never been done before. Unfortunately yesterday Brad suffered a terrible crash and had to be airlifted to an Orlando hospital with a severe neck/spine injury. We don’t know too many details – and we don’t need to. All we know is that a fellow rider is in need of help and we’re going to do what we can to deliver it. Brad’s family is coming in from New Zealand to be with him and support is pouring in from around the industry and the world. The road ahead is going to be a long one and if you find it in your heart to help with some of the heavy medical costs sure to come, please take a minute and make a donation here http://www.bradsmeelefoundation.com 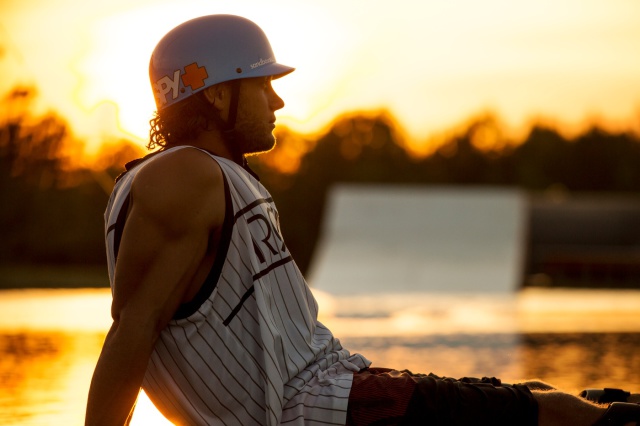 UPDATE: If you are in the Orlando area Tuesday, July 15, please stop by Wall St. and the Other Bar to show your support for Brad. Friends have quickly put together a silent auction/raffle fundraiser to help raise more money for Brad and his family. There will be some great items there available for purchase – and obviously all of the proceeds will go toward helping out Brad with us recovery. More info about the fundraiser can be found via Facebook.

We at Alliance are crushed at the news, but hopeful knowing that Brad is in the hands of some incredible doctors. Brad is one of the kindest, most enthusiastic guys you will ever meet. If you don’t know him from his photos and videos over the years, you’ve undoubtedly heard him on the microphone the last couple years at the Wake Park Triple Crown events or alongside Dan-O at the PWT stops. If you’d like to just send brad an encouraging word, you can do so on his personal Facebook page or if you’ve ever met with or interacted with Brad, post a picture to Instagram/Twitter/Facebook/etc and use the hashtag #staystrongbrad. The group of photos is already large and adding to it will only continue to show Brad just how much support he has around the world.

In the meantime, here is a powerful story from the Ronix team in support of the rider who helped make Lake Ronix what it is today:

With a brawny powerful physique and a soft, humble personality Brad Smeele made the trek from his homeland of New Zealand to Orlando right when we started Ronix to pursue his dream of being a pro wakeboarder.

Without any sponsors to back him, he never wavered from his commitment to make a name for himself.
Calling it a night on peoples couches, he changed his address as often as he needed a back up board –  with his 215 pound physique he has never been the kindest rider to his products while landing from a double up.

One of the first riders to land a 1080, he built and landed the biggest step up kicker from 2 waterways in its time, some decent contest results, but he still wasn’t able to catapult himself as being regarded as one of the elite riders.

Always on call to help at a moments notice for his sponsors, even though his sponsors did very little for him in return (including us) but he was never even slightly discouraged of his dream.

Seasons went by without that big break, he would go back home each fall with a new hobble or a fresh x ray on his shoulder.

How could somebody take this type of mental and physical strain year after year without having industry supporting him on a bigger level?

Thru the winter months of the 2012/2013 offseason, Brad was calling from New Zealand with updates on his rehabilitation – but we”ll be honest we didn’t even take his calls. Between the passing of our leader Herb O’Brien, and the purchase of our new training and R&D center Lake Ronix we didn’t give Brad his just due time or respect. In the spring of 2013 he flew back to Orlando with a freshly repaired body, a couple of bucks in his wallet, but most importantly the same strong willed mindset of making his mark. He jumped off the plane, called his mates (mostly other Ronix riders), and asked what they are up to and if he could crash on their couch. Of course the riders said yes to the place to stay, but thru him for a curveball when they replied come meet us at Lake Ronix. Brad had no idea what that even was, and he did something we will never forget. He got directions, drove out there, and he instantly had a vision. Telling the other riders he will be back in a bit, he spends most of the money he had on lumber runs. He comes back with his truck filled with 2×4’s, a saw, and wood screws. Brad starts pounding out picnic tables, benches, fire pits, and the first rails the lake had ever seen. Some of the other riders called our office and told us the story. With our tail behind our legs, we humbly called a rider that we have never paid, barely marketed, and in return has been one of the most loyal, devoted riders we have ever known. After a intro of run-ons of apologies for not calling him back, and appreciations for what he was doing – his reply was “If there is a fight worth fighting for I’ll fight for it, and Ronix has always been worth fighting for.”

How do you even reply to that?  A level of generosity and devotion you just don’t see. It was like something straight out of a action movie, where the superhero saves the world and has the perfectly scripted quote to the leading lady. From that point on there was no dispute who the leader of our training grounds, R&D center and in many ways our company had become.    We got him a construction site trailer, and with no running water or power, parked on one of the beaches that he built,  this is where for the past year Brad has called home. His vision became infectious, and suddenly the whole team was motivated to follow his example converting banks into wall rides, and open water into massive kickers and down ramps. This May, Brad completed the most progressive lineup of features our sport has seen, and so began the media blitz.
Whether it has been filming for a big upcoming movie, shooting for our new brochure and website, or just putting on a demo for some VIP dealers swinging by, Brad has made it clear that he is more than just the foreman of a lake and it’s build out. He’s innovated more new tricks (yet to be published) than anybody else on our team, or arguably anybody in our sport. Now finally cashing some checks, videos and other sponsors taking notice, living on a private 210 acre lake oasis, and most importantly to him the ultimate level of respect from his peers. All of those nights of tossing and turning that would leave most of us to throw in the towel on being a pro rider were finally paying off. He knew that some of the features they were hitting were gnarly, and needed to be taken with severe precaution and he enrolled himself and Chad Sharpe in a CPR seminar. Made sure that when filming certain lines that there were riders in all of the right areas, and a SUP board close by in case somebody needed a floating stretcher.

On Sunday July 6th while putting his finishing touches on his soon to be released historic video section Brad had a very traumatic injury. Because our leader demanded we have a SUP board on sight, wore a Coast Guard Approved Jacket, and have other riders CPR certified Chad Sharpe, and Dean Smith were able to safely get him onto the board and remove any water from his lungs. Now he is in the doctors’ and God’s hands.

We don’t know every detail, and we would rather have his family publish any updates when it’s time – but what we do know is this…
“If there is a fight worth fighting for we’ll fight for it, and Brad Smeele you are worth fighting for”
He needs our prayers, and his family could use your support.
To make a donation to the recovery one of the best people, leaders, riders we have ever worked with –  www.givealittle.co.nz/cause/bradsmeele 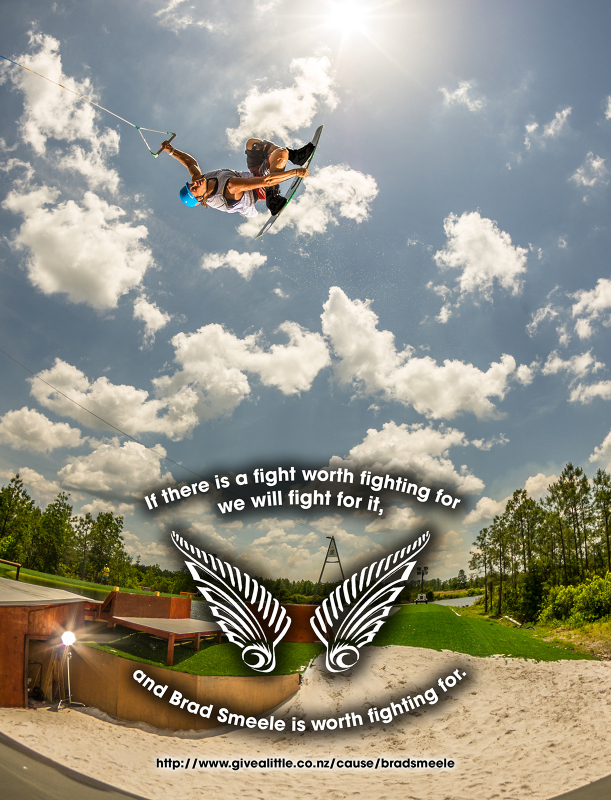